Tigers Take to the Practice Field!

Share All sharing options for: Tigers Take to the Practice Field! 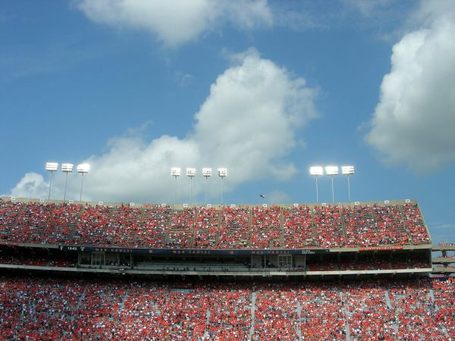 It's nearly time to fill that stadium, again!

War Eagle, everybody! It's been a long winter since football season ended. Now, the yellow/green dust is everywhere, it's possible to break a sweat outdoors again, and the weather radio wakes us up at 2:00 AM every couple of days. Yep, it's spring again, and that means spring football! Auburn has now been practicing for more than a week. What do we know, so far about how it's going?

I think the most encouraging thing, so far, has been lack of news on the injury front. Yes, there have been stories about Tommy Trott, Phillip Pierre-Louis, Lee Ziemba and Chris Todd. All of those injuries happened last year. So far, in this year's camp, we've got the mysterious Gabe McKenzie injury, that kept him out of practice, but didn't keep him from climbing the stairs at the Beave. At this time last year, the Auburn Tigers almost needed their own wing at East Alabama Medical Center! This year breaks a long tradition of having at least one player out for the season, as soon as the pads are put on.

We really don't know what product will come out of this spring. On defense, I'd expect that we'll be back to a solid cover-two in the secondary, with lots of movement up front. Caution: on A-Day, don't expect to see a lot of those stunts displayed. Chizik's defense is not learned overnight. I can remember when his first Auburn unit took the field in Los Angeles, in 2002, and we looked awfully confused trying to track down Norm Chow's west coast attack. And then there was an absolute melt-down up front against Arkansas, in a 38-17 home embarrassment. That first unit got better and better, though, and finished the season by holding the last two opponents to 7, and 9 points. Alabama was averaging 30.8 points per game. Penn State was averaging 36.4, with 2000-yard rusher Larry Johnson. Chizik's first Auburn group held both to single digits.

On special teams, Jay Boulware has already mentioned that Auburn was pretty good on special teams, last season. Look for the emphasis to be on maintaining the quality. One tall order has to be finding replacements for Tristan Davis, and Robert Dunn. I don't think anyone currently on the squad has ever fielded a live college football punt.

Offensively, it's mostly huge question marks. Auburn goes into the spring with some glaring holes. Guz Malzhan has fielded diverse offenses every year since he left the high-school ranks. Each offense has been different. That speaks to me that Malzhan is adept at finding playmakers, and utilizing them. This spring, he inherits an offense that couldn't really spread it out through the air, and couldn't run over people in the middle. It's a tall order, fixing the mess.

Some quick notes on positions:

Tracy Rocker hasn't said much on the defensive line, except that they are not where they want to be. Building depth HAS to be a key concern. We're an injury or two away from disaster, right now.

Linebacker is thin, as well. With Bynes and Stevens as the only returning veterans, Ted Roof must get young players ready to go. The best defensive news from this spring has to be the emergence of Eltoro Freeman. He showed up in shape, and ready to rumble, from the looks of him on film! I HAVE to believe that our linebackers will be a lot more aggressive this year, under Roof.

On special teams, We have yet to name starting return men. There should be good competition at the punting, and kicking positions. Vying to replace Robert Dunn at punt returner, are Quindarious Carr, Mario Fannin, Walt McFadden, and redshirt freshman Justin Albert. Trooper Taylor is working with the return men, and he says, “The one thing we want to do is not let that ball hit the ground.” Music to my ears, after 6 years of Tre Smith and Robert Dunn! And after a week, the leader for the place-kicking job is... not one of the two you were thinking. Not Byrum or Hull. It's redshirt freshman Chandler Brooks. Evidently, he's been way more consistent than the incumbents!

On the offensive line, the beef is back. The news this spring is that our line is back up to SEC size. A penciled in starting unit of Ziemba, Berry, Pugh, Issom, and McCain looks solid. Depth will be a concern. Yesterday's news about Bart Eddin's old knee injury flaring up was not good. Some Hugh Nall vs. Jeff Grimes comparison notes have been made in the press. Seems there's a lot more teaching going on, and a lot less yelling, this spring.

Biggest offensive question I have right now, is who are the tight ends? Who is going to lead-block? Surely not a smörgåsbord of 190-pound wide receivers? Tommy Trott's still on rehab. Gabe McKenzie is out. Vance Smith moved to tackle. Brent Slusher is finished with football. Do we have any tight ends practicing?

On the wide receiver front, the only performers mentioned positively by the staff have been Tim Hawthorne and Montez Billings. For Auburn to have offensive success, someone is going to HAVE to step up. Several someones. There are some bodies out there, Carr, Adams, Winter, Zachary; but I have to think that there will be immediate opportunities for newcomers in August. Deangelo Benton may well step right into a starting role. The good news is that I have every confidence that Trooper Taylor will provide the training needed, for our receivers to get the job done. Trooper's comment about one of the above? "He looks the part, but I told him right now he's like a limo without gas. He looks good and I can't ride him. So I need him to go ahead and get some gas in his tank and go." Ouch.

At running back, the committee approach may be gone. From coaching comments so far, get ready for a heavy dose of Ben Tate. And that's not a bad thing. If 90 percent of Tate's carries aren't a shotgun handoff into the short side against a nine man front, he'll do well, I think! Mario Fannin, as usual, is still battling injuries. Onterio McCaleb has turned heads, but he's listed at 160 pounds. There's been no mention at all, about other running backs, such as John Douglas and Eric Smith. We keep hearing that the offense is a two-back system. We're still waiting to hear who they are!

Getting the most attention from the press has been the quarterback race. Evidently, right now, it's a two horse race between Kodi Burns and Neil Caudle. Personally, I hope Kodi Burns wins, since he has the live SEC experience. To do that, of course, he'll have to be able to throw more accurately. Neil Caudle has overcome a lot, to be in the position he's in now. The kid tore both knees up in high school, and suffered a separated shoulder in practice 20 months ago. I've watched Caudle in the past two spring games. He's got a live arm, but had a tendency to force it into coverage. Last spring, Caudle looked pretty speedy afoot, too. If Caudle, or even Trotter, or Tyrik Rollinson win the starting job, we'll be putting an absolutely green quarterback on the field next fall.

That's it for now. We'll keep our ears peeled for news and video clips from the Plains. We'll certainly know more, as far as individual players are concerned, after watching A-Day. War Eagle, and stay safe today, during the storms!