Share All sharing options for: Campbell and Brown at the Center of Trade Talks as NFL Draft Nears 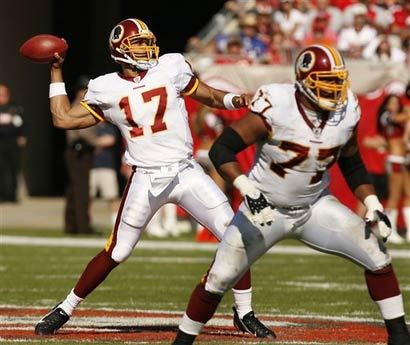 Will Campbell still be in a Redskins uniform Saturday night?

When the NFL draft cranks up Saturday afternoon, this past season's Auburn seniors are not expected to get a lot of play. But the same cannot be said of some current Tiger NFL players. At least two big name former Auburn players are at the center of trade talks as the draft approaches.

Former Auburn defensive lineman Sen'Derrick Marks is expected to hear his name called sometime in the second round and should be the highest Auburn player selected. But the big story centers around Washington quarterback Jason Campbell and Dolphins running back Ronnie Brown.  Both players are widely believed to be on the trading block.

Campbell has gotten the most attention in recent days. It seems that Daniel Snyder, the unstable and unpredictable owner of the Redskins has fallen in love with USC quarterback Mark Sanchez. It's been reported by the Washington media that Snyder is negotiating to move up in the draft to acquire Sanchez.

This morning there are two teams being mentioned as possible destinations for Campbell.  The first is the New York Jets. It's rumored that the club has no interest in trading up for Sanchez, but does have a lot of interest in Campbell. The Jets are looking for a quarterback following the retirement of Brett Favre.

Another team getting some mention is the Tampa Bay Buccaneers. Former Redskins quarterback and current Buccaneers director of player personnel Doug Williams is a huge Campbell fan and believes he fits nicely into the new Tampa Bay offense.

All of this comes in the wake of Snyder's ill-fated move to acquire former Vanderbilt and Denver quarterback Jay Cutler last month. If there's any consolation in all of this for Campbell it's that most Redskins fans are squarely in his camp. The way they've treated him has been nothing short of atrocious.

You're unlikely to find another player in the NFL who's weathered this kind of storm with the class Campbell has shown. He continues to surprise his teammates, showing up to work every day and working harder than most. "My teammates said, 'Jason why are you here?' And I told them: 'I'm still the quarterback of this team until they get rid of me.'"

Why Ronnie Brown is on the trading block is more of a mystery.  Coming off an injury plagued 2007 campaign, Brown had a breakout season a year ago and helped lead the lowly Dolphins back to contention, earning a playoff birth and himself a trip to the Pro Bowl. Like at Auburn, Brown does more than carry out of the backfield. His hands are considered among the best in the league at running back.

Brown seems to be the perfect back for Miami's new Wildcat formation. But team president Bill Parcells sees trading Brown as an opportunity to squeeze another player out of Saturday's draft. Purportedly he's looking for a first and third round pick in exchange for the former Auburn back.

So while it's doubtful most Auburn fans will be glued to the draft this year, there still may be plenty of action involving former Auburn players. Let's hope that Campbell lands somewhere stable and is able to finally put some roots down and be given a fair shot. Of course the downside is that it's likely he'll claim his 10th coordinator by the time camp opens in August.

Brown's prospects appear brighter. Following a Pro Bowl season you can bet they'll be lined up to claim his services.  Both of these fine men make you proud to be Auburn fans.