Bama Fans Believe Their Job Is A Top Five One - LOL

Share All sharing options for: Bama Fans Believe Their Job Is A Top Five One - LOL 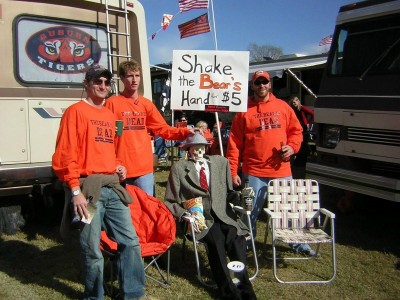 Good Monday morning to all of you. It seems that my post on Friday about the top five college coaching jobs in America got the Bama Nation riled up. Some little twit who couldn't find Tuscaloosa with a road map, a GPS and Magellan in the passenger seat attacked me personally in a fanpost at Roll Bama Roll for not including Alabama among the top five coaching jobs - Quit laughing.

I know, it was absolutely hilarious. You could just feel the anger and resentment in his post. It was golden. I've sent it to everybody I know. It just sums up how delusional Alabama fans still are about their school.

I realize a lot of people like to bang on Roll Bama Roll because of its content. And true, it does veer from athletics from time-to-time; but in full disclosure I have to say that I believe Todd and his team do a damn good job over there. I don't get to visit as much as I'd like, but when I do, I find their coverage excellent - and yes, I admit I do enjoy the coverage outside of athletics. Don't shoot me.

But what I like most are the fans that frequent the site. The majority of them are good folks who seem to be level headed and objective. Sure they call us lame names and that's cool with me. It's good for the rivalry.

But what keeps me reading are the delusional ones who still believe Alabama is relevant. I just picture these people sitting around their trailers, drinking Pabst Blue Ribbon on their plaid couches with the kids running around in only a diaper and Paul Finbaum playing on the radio. On the wall next to George Wallace is a faded picture of Bear Bryant. Can you picture it? If you ever want to feel good about Auburn, spend an afternoon listening to some Finebaum callers. All of them are cast straight from "My Name is Earl."

In the final analysis, Alabama's head coaching job falls behind those at Florida, LSU, Georgia, Tennessee and Auburn. If you don't believe me, just look at the motley crew of coaches who've taken the job over the past decade. Better yet, look at the name coaches who've turned it down.

It's got to be tough being a Bama fan over these past 25 years. To all of those who spoke ill of me over at Roll Bama Roll, I forgive you. I understand the hurt and frustration you must be feeling. I have you in my prayers.