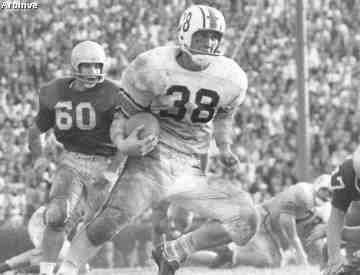 A three-year letterman from 1958-60, Dyas is the first Auburn inductee since Coach Pat Dye went into the College Football Hall of Fame in 2005. He's the first Auburn player to be inducted since Tracy Rocker in 2004.

"I was quite shocked when I got the news," Dyas said. "This is just a wonderful day, and I'm so proud to be inducted. I'm very humbled and thankful that this prestigious honor would happen to me. There have been so many great Auburn players that deserve to be in the Hall of Fame, and I'm excited to be joining those individuals that are already members of the Hall of Fame. I'm familiar with the National Football Foundation, having been a scholar athlete, and it is a tremendous foundation and outstanding event. I'm proud to be an Auburn Tiger and to have been part of a great program and a great school."

Dyas was one of the most prolific field goal kickers in college football history. In 1960, he set an NCAA record for most field goals in a season with 13. He won four Southeastern Conference games that year with field goals, including three against Georgia in a 9-6 Auburn victory in the first Auburn-Georgia game played at what is now know as Jordan-Hare Stadium.

Dyas was also a standout fullback and linebacker, concluding his career as Auburn's sixth all-time leading rusher with 1,298 yards. During his All-American senior season, Dyas also led the Tigers in rushing and scoring and was selected as the SEC's most outstanding back.

"We are thrilled that Ed Dyas has been selected for induction into the prestigious College Football Hall of Fame," Auburn Athletics Director Jay Jacobs said. "He is an Auburn legend who exemplifies everything that we hope our current and future student-athletes embody. Not only was he an outstanding football player who will always be remembered in Auburn lore, he was also a stellar student who became a renowned orthopedic surgeon."
As a senior, Dyas won the Cliff Hare Award, which is presented to the outstanding Auburn senior student-athlete, and the Bill Streit Award, which goes to the football player with the highest grade point average over four years.

An excellent pre-med student at Auburn, Dyas was selected captain of the 1960 Scholastic All-America team. Following graduation from Auburn, he went to medical school and has been a highly respected orthopedic surgeon in Mobile.

In 1994, Dyas received the Walter Gilbert Award, which is awarded annually to a former Auburn student-athlete who distinguishes themselves through achievements after graduation at Auburn.

A native of Mobile, Dyas was inducted into the Alabama Sports Hall of Fame in 1999.