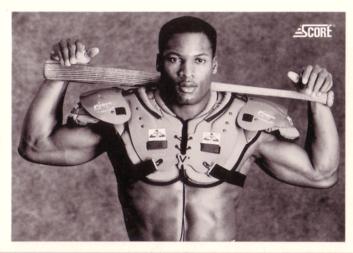 Has it been nearly 30 years since Bo arrived at Auburn?

Good Monday morning to you. To all of our readers who are moms, a happy belated Mother's Day. I hope your day was special. I live across from the 18th hole of a golf course and over the years I've discovered on Mother's Day that if you are brave enough to ignore your mom and wife, you can have the entire course to yourself. It's by far the slowest day of the year on the links. For the record, I don't recommend playing golf on the big day - unless you enjoy being miserable for the next three months.

By now I'm sure everyone has read and seen the shots of Bo Jackson giving the Auburn commencement address on Saturday. Does he not continue to amaze you? It's hard to believe that same person came to Auburn nearly 30 years ago with a severe speech impediment and now can stand a deliver a speech like that.

People like to talk about Bo's God given talent - and there's no doubt he got more than most, but to see him overcome this problem shows how strong his work ethic and determination is to succeed in everything. His success in business and life after sports is just as amazing as his days on the Plains. If you're an Auburn person, you had to get chills seeing him on that stage Saturday.

My kids get sick of me telling Bo stories. Over the years I've tried to capture in words what it was like to watch him on the field. If you saw him play you know words just can't do justice. Nowadays, when I bring up Bo my kids just throw their hands up and yell, "Here we go again."

The funny thing is I remember my dad telling similar stories about Pat Sullivan and Terry Beasley and I had the same reaction. In a lot of ways, life is beginning to come full circle.

The inaugural baseball campaign of the John Pawlowski era has officially gone up in flames with one week left in the regular season. When Auburn dropped two games to Kentucky on Saturday night, they were officially eliminated from SEC Tournament contention. The Tigers stand at 9-18 in SEC play after salvaging a 7-5 win over the Wildcats Sunday afternoon. The win snaps a nine game conference losing streak.

It became apparent early in the season that Auburn had serious middle and late relief pitching problems and it just got worse once conference play began. Numerous Auburn message boards have been lighting up in recent days slamming the job Pawlowski has done. It's simply ridiculous to start passing judgment this early in his tenure. I can tell you he didn't forget how to coach in the year since he arrived.

Auburn's program is a sleeping giant.  Have faith in Pawlowski. He's the right man for this job. Not to make excuses, but with the SEC you are playing top 25 teams on a weekly basis. When you don't have the players, it doesn't matter if you are Joe Torre. Mark my word: Auburn will be back in Omaha with Pawlowski.

The Tigers welcome Georgia Southern on Tuesday at 6 p.m. CT and then finish the season with a weekend series at home against Alabama.  With Bama on the schedule, there's still a lot left to play for this year. Come out a support them.