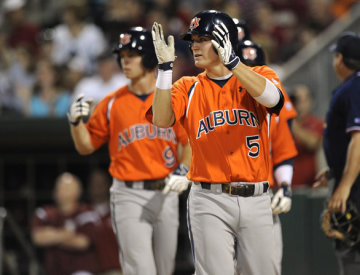 Is it possible for Auburn to still make the NCAA Tournament?

I've got baseball on my mind today. I spent a night at AT&T Park here in San Francisco this week watching the Giants play. One of the things I try to do when I travel for work is visit as many Major League Baseball parks as I can. This is my fourth trip to the Giants upscale park and I have to say it's among the best in all of MLB. I can't imagine any better scenery for a baseball game.

When we last talked on Monday, most of us had given up Auburn (29-24) for dead this baseball season. The Tigers win over Kentucky on Sunday snapped a nine-game conference losing streak and left Auburn standing at 9-18 in SEC play. Now word comes that John Pawlowski's team may be in position to still claim an NCAA Tournament bid.

Just when we thought the unexplainable RPI system used in basketball had gone the way of the swine flu this year, it again rears it's ugly head - but this time it may actually help Auburn. What was thought to be a meaningless game against Georgia Southern on Tuesday turned out to be much more. Auburn's 8-6 win over the boys from Statesboro may actually push the Tigers toward a tournament appearance. Because Georgia Southern's RPI is higher than Auburn's the win actually keeps the Tigers in contention.

Like with basketball, the NCAA has a selection committee that will choose the 64 participants. Many of those will be made up of conference champions, leaving only a limited number of at-large slots. Auburn's RPI is thought to be between 30 and 40 according to the OA News, which is higher than some SEC teams heading to Birmingham next week for the conference tournament.

Here's what Auburn's Media Relations has to say about the Tigers chances...

Auburn remains in the discussion for a possible NCAA Regional berth thanks to an RPI of 34 (WarrenNolan and BoydsWorld) and a strength of schedule of 12th (WarrenNolan) ... Alabama has a RPI of 20 (WarrenNolan) and 24 (BoydsWorld), so a series victory would most likely boost Auburn's number ... Auburn is 11-21 against WarrenNolan's Top 50 RPI teams and is 4-2 against teams 51-100 for a total of 15-23 against Top 100 RPI teams ... When Auburn was last selected to a NCAA Regional in 2005, its RPI was 16th and its strength of schedule was first after finishing the year 34-26, 13-17 SEC.

Alabama will have a lot to say about Auburn's tournament chances when they visit Plainsman Park tonight for the first of a three game series that concludes the regular season for both teams. The Tide (36-15, 17-9) enters the weekend series ranked 12th nationally by Baseball America. They are a half game back of LSU in the SEC West and trail Florida by a half game in the chase for the regular season title.

Auburn is not catching Alabama at the best time. They are riding an eight game winning streak including a Mother's Day weekend sweep of Arkansas. In their only meeting this year, Auburn defeated Alabama 8-7 back on March 10th. Here is the probable starting pitching for the series...