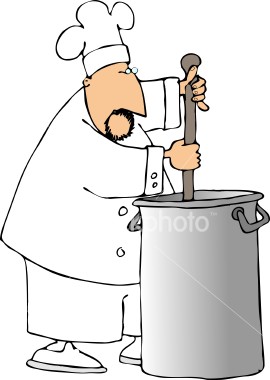 The Orlando Sentinel's College Gridiron 365 had a post recently about who they thought were CFB's best pot-stirring, trouble-causing coaches. Keep in mind, there might be a slight southern bias in this list, but they don't call them The Slantinel for nothing...

5) Pete Carroll, USC: The original bare-chested recruiter. sports hasn't seen this kind of beefcake since a certain Spartan squad in 300.

4) Urban Meyer, Florida: With recent tiffs involving former Gator QB and current radio host Shane Matthews, along with comments about Auburn's recruiting limo (justified) not to mention being on the receiving end of jabs by Lane Kiffin and Steve Spurrier, Corch Meyer seems to be about everywhere these days, and could be considered a pot-stirrer just by association.

3) Mark Richt, Georgia: The choir-boy pot-stirrer, doing it behind the scenes. Not sure why he's ahead of Meyer on this list. If we see yet another Black-Out or end-zone rush this season, he might deserve it.

2) Lane Kiffin, Tennessee: We haven't seen someone rush up the charts this quick since The Beatles landed in America in 1964. Like Churchill said, of Kiffin: "never before in the field of sports conflict have we seen so many, pissed off so much, by so few..."

1) Steve Spurrier, South Carolina: The number one pot-stirrer, for now and forever. Spurrier pioneered the field and can never be counted out to make it interesting. With recent remarks about Urban Meyer and the Notre Dame job, perhaps a certain resume in the Florida Field trophy cabinet is being crowded out by someone else's.

There's probably little doubt that the only reason Phil Fulmer is not on the list is the fact that he currently does not have employment in his chosen profession. And perhaps they give Bobby Bowden a pass because it's not nice to pick on senior citizens. And you have to wonder where Nick Saban, Rick Neuheisel, Butch Davis and Les Miles are. Perhaps they at least warrant honorable mention? Mr. Congeniality?

For what it's worth, my list, in no particular order, of coaches who tend to have the most even keel:

And I would have added Tommy Tuberville in this second list if he was currently employed.