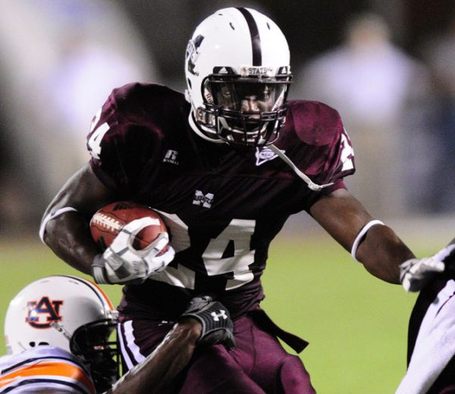 Anthony Dixon is tough to bring down!

War Eagle, everybody! On September 12th, 2009, Auburn opens its SEC season at Jordan-Hare Stadium, against the Mississippi State Bulldogs. The game figures to be a tough, physical test for Gene Chizik's inaugural Tiger team. Both head coaches will be in their first seasons with new teams, and anything could happen in this game. Last season football season, only four new head coaches had winning records, in the Bowl Subdivision. Will either the Bulldogs, or the Tigers be a factor, this season? Time will tell. The Tigers and the Bulldogs played possibly the ugliest game in all of college football last season in Starkville, a 3-2 Auburn victory. This year's game may be equally low scoring. Auburn will have had a test at home against Louisiana Tech, coming into this one. MSU will tee off on Jackson State, before facing the Tigers.

Despite having one of the saltier defenses in the SEC, head coach Sylvester Croom was forced to resign at the end of last season. New coach Dan Mullen inherits only a few of those players, and tapped to coordinate the defense is veteran Carl Torbush. Torbush, as you'll recall, was defensive coordinator at Alabama, under Dennis Franchione. Much like his Tide defenses, the front seven will be ok, but the depth in the secondary is an issue. The loss of veteran safety Derek Pegues will be huge. On the plus side, bone-rattling linebacker Jamar Chaney returns, after tearing up an ankle in the first game last year, and missing the entire season. Incoming JUCO tackle Pernell McPhee looks to be a much-needed addition to a somewhat depleted interior line.

As most readers know, head coach Dan Mullen was the coordinator of Florida's pesky spread offense under Urban Meyer. Coordinating Mullen's O at Mississippi State is another Franchione man, Les Koenning. Both Mullen and Koenning are known for innovative running games, and with the Bulldogs' lack of proven wide receivers, they'll need to be strong on the ground in 2009. Running backs coach Greg Knox, formerly Auburn's wide receivers coach, says that MSU's running backs are the better than any Auburn had in Tuberville's ten years. While most folks laugh at the idea that there are better backs in Starkville than Rudi Johnson, Carnell Williams, Ronnie Brown, Brandon Jacobs, or Kenny Irons, there's no denying that Anthony Dixon is a stud. While Tyson Lee currently holds down the starting quarterback job, rumor is that incoming signee Tyler Russell will have a chance to start by the season opener.

The Bulldogs lose many key special teams players, including return-man Derek Pegues and both the kicker and punter. Coach Mullen has attempted to fill the void with JUCO players, and if spring is any indication, it has worked. New kicker Sean Brauchle reportedly hit a 57-yard field goal in practice, and punter Heath Hutchens has been booming the punts. Who'll return kicks is still wide open.

Auburn defensive line vs. MSU offensive line: The line is still unsettled, as Mullen continues to move folks around. The current lineup is good-sized, but these guys did not protect the quarterback, nor open up near enough running lanes, last season. The towering, long-armed left tackle, junior Derek Sharrod, probably has the most upside. The MSU line faces almost the same Auburn defensive line that whipped them badly, a year ago. Gone is tackle SenDerrick Marks, but Jake Ricks seems to be an adequate replacement. Auburn's speedy ends were a huge problem, and figure to be again. Advantage: Auburn.

Auburn linebackers vs. MSU backs: Star senior runner Anthony Dixon has reportedly lost 20 pounds, down to about 235 pounds. He's still a load, at that size, and is said to be in the best shape of his life. Mullen and Koenning are lining Dixon up all over the field, at tailback, slot receiver, H-back, and even taking direct snaps. It's clear that Dixon is the main man in the offense, but Christian Ducre is an adequate backup, as well. MSU lost a good blocking fullback to graduation, and the new offense favors a lightweight, speedy H-back. Auburn linebackers Craig Stevens and Josh Bynes had good success against Dixon last year, and figure to again this year, especially with less blocking in store. Advantage: Auburn.

Auburn corners vs. MSU receivers: Auburn returns a lineup of capable, veteran corners, which should be able to limit Bulldog receivers. Senior Brandon McRae is the best of the returning Bulldogs, a tall target at 6-4. McRae caught 51 balls for 518 yards last season, but he's currently trying to return from a broken leg. Beyond that, MSU appears to be banking heavily on newcomers. JUCO junior Leon Berry caught 8 balls in the Bulldog spring game. Last season, the Bulldogs only had ten TD receptions all season, and they will look to improve on that, this year. Advantage: Auburn

Auburn safeties vs. MSU secondary receivers and quarterback: The health of the Auburn safeties is a big mystery at this time, but Zach Etheridge and Michael McNeil should be well by September. They'll be facing some young opponents on the other side. H-back Delmon Robinson caught 12 balls a year ago, and Y-receiver Brandon Henderson caught only 6. It's a young, and not terribly large group, and they will likely have difficulty blocking Auburn's back seven downfield. At quarterback, whether it's Tyson Lee, backup Chris Relf, or incoming freshman Tyler Russell, it will be a difficult task to operate a new offense, against Auburn's defense. Advantage: Auburn.

Punting: Clinton Durst is poised to have a great second season, averaging 42.1 yards per punt. MSU's punter, JUCO junior Heath Hutchens has yet to launch a live SEC punt. Neither team has decided for sure who'll return punts. MSU's current leader is JUCO transfer Leon Berry. The Auburn coverage unit a year ago gave up 7.0 yards per return, and MSU's gave up a whopping 11.6. Advantage: Auburn.

Kickoffs: Auburn's Wes Byrum averaged 64.7 yards per kickoff a year ago, and in this year's A-Day game, he managed 67 yards. MSU's Sean Brauchle hasn't kicked in live SEC competition, but one has to think that if he can nail a 57-yard field goal (64 yards in the air, AND clear the crossbar...), his odds of reaching the end zone are pretty good. Even if it's not a touchback, MSU covered kicks pretty well, giving up only 18.2 yards per return, last season. Auburn gave up 21.5. Neither team has established who'll return kicks. Right now, you'd have to say that for Auburn, Onterio McCaleb and Mario Fannin are the leaders. MSU lists Leon Berry as the starter. Advantage: Mississippi State.

Place kicking: After a spectacular freshman season, Wes Byrum suffered a sophomore slump last season, and only connected on 11 of 19 attempts. While he held off all challengers this spring, reports indicate that he's still struggling a bit with his form. MSU signed JUCO All-American Sean Brauchle, and by all accounts, he's going to be a good one! Advantage: Mississippi State.

Auburn offensive line vs. MSU defensive line: Auburn returns a veteran line that has worked its way back to SEC-size, and should be solid. MSU lost a pair of tremendous tackles, and has needs at end. 275-pound JUCO tackle Pernell McPhee was said to be unblockable in spring drills, but of course, that was against the Bulldog O-line. Kyle Love, at 310 pounds, should be adequate at the other tackle spot. Depth is a concern, as the Bulldogs are undersized, beyond that. At end, junior Brandon Cooper and sophomore Sean Ferguson have some experience, but only 5 starts between them. None of the ends have been terribly impressive, as yet. Advantage: Auburn.

Auburn backs vs. MSU linebackers: Jamar Chaney returns from injury to lead the Bulldog 'backers, and he'll team with a pair of juniors, K. J. Wright, and JUCO Chris White. It's a veteran, nasty unit, but they'll be facing the likes of Ben Tate, Mario Fannin, and some talented younger backs. Advantage: Even.

Auburn receivers vs. MSU corners: Auburn has been hurting at wide receiver for several years, and may be again this fall. However, under new position coach Trooper Taylor, the drops are down, and separation is up. The corps put in a good day on A-Day, and project to be better next fall. MSU has the veteran senior Marcus Washington returning on one side, and sophomore Damien Washington penciled in on the other. As a pass defender last season, in 12 starts, Washington managed only 4 pass breakups, and no interceptions. Anderson was a reserve. Both corners  are around the 5-10 height range, and may have trouble with taller Auburn receivers like Tim Hawthorne. Beyond the starters, there is no depth. Advantage: Auburn.

Auburn secondary receivers and quarterback vs. MSU safeties: Auburn will be dangerous at the inside receiver positions, with the likes of Tommy Trott and Mario Fannin returning. At quarterback, however, Auburn likely will be more of a threat on the ground than through the air, if past history holds true. Both Kodi Burns and Neil Caudle can run, but have not established SEC-level passing reputations. MSU has to reload at safety, after the loss of veterans Derek Pegues and Keith Fitzhugh. Filling one slot will be sophomore Charles Mitchell, a converted reserve corner. The other safety is junior Zach Smith, another converted corner. There is little experience, and little depth here. Advantage: Auburn.

On defense, the Bulldogs have lost too many players to hold Auburn to 3 points again. On offense, right now, it looks like keying on Tony Dixon and newcomer Leon Berry will be the ticket. I'd expect the Bulldogs to get some points, based on past creativity displayed by Mullen and Koenning. Special teams should be close, although I have to like the apparently strong MSU legs. It's an old saw, but I think if Auburn limits turnovers, they have a great chance to win this game. Mississippi State is relying on too many newcomers, and has even less depth than Auburn does.

Prediction: Without Gator-level talent, Coach Dan Mullen faces a steep learning curve in the SEC. Auburn shuts down the Bulldogs, 20-9.