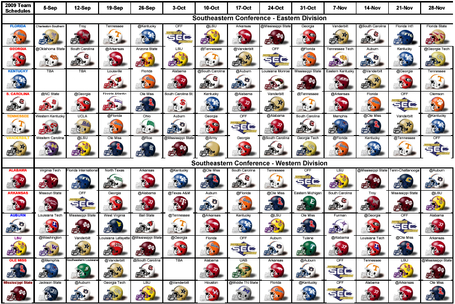 It's no secret that no conference takes more crap about the strength of their out of conference (OOC) scheduling than does the SEC. It's to be expected, given the strength of the intra conference competition. We have plenty of high caliber teams to play without straying too far from Dixie. And it's no secret that the key to a future playoff might entail all BCS conference schools being required to play one or two OOC BCS teams each year, in an attempt to balance out inequities in scheduling that are found in every conference. With the thread two weeks ago about about teams we'd like to see Auburn schedule, I started to wonder about which teams in the conference actually do have a permanent game with a OOC BCS school. It's not as many as you might think.

In the SEC, the following rivalries qualify:

That leaves 8 teams without one: Alabama, Arkansas, Auburn, LSU, Tennessee, Ole Miss, Miss State, and Vanderbilt. Notice a trend above? All the schools are from the ACC, with the exception of Big East Louisville. Country Cousins, indeed.

Let's take a look at the ACC: the three teams above are covered, but the only other ACC team with a OOC BCS rivalry is Maryland, who has significant history with West Virginia. That also leaves 8 teams left: Miami, VA Tech, North Carolina, NC State, Virginia, Boston College, Wake Forest, and Duke. With each conference sharing so much history and rivalry, it's natural to pair them up as dance partners in this big CFB hoedown, perhaps under the following terms:

Alabama--Miami: Every SEC team would probably want first shot at Miami, the one school we all would've loved to watch struggle to win so many MNCs in our back yard, but Alabama gets first shot. Florida would have a historical claim on the Canes, but they're tied up with that former girls' school from Tallahassee. (I wonder if the Gators would trade the Noles to us?)

Tennessee--North Carolina: A 31-game history exists between these two neighbors, but they haven't played in almost 50 years. Could everything old be new again? Try it and see!

LSU--VA Tech: A recent home and home in 2002 and 2007 showed the potential to be a really good series, even though I think a better matchup would be between VT and Auburn. We'll get our chance with the Hokey Pokies soon enough.

Auburn--Boston College: Actually, a 3- games history exists between the schools--2 pre-war games and the 1982 Tangerine Bowl win for us (was Flutie playing then?) Although we'd have to travel quite a bit every other year, can you think of any cooler venue than Boston in the fall? Me neither.

Ole Miss--Virginia: Absolutely no history between these two schools, so no better time to get something started. The Rebels have only ever played 19 games against ACC schools, so let's push them into the pool!

Arkansas--NC State: Again, no history whatsoever between these teams. Arkansas' old Southwest Conference affiliation pretty much kept them off the Atlantic coast. They've only played 8 games ever against ACC foes.

Miss State--Wake Forest: Isn't it intriguing that the bottom of the pack from each conference has virtually no experience in playing teams from the other? The Bulldogs have only played 28 games against the ACC and none against the school named Wake Forest that is no longer located in Wake Forest, NC.

Vanderbilt--Duke: Who didn't already have this matchup penciled in? The Caboose Bowl. These guys were made for each other like ketchup and french fries. As a matter of fact, I make a motion that we just go ahead and keep this game permanent. Seems both schools thought the pairing inevitable, too. They've played their whole 11 game series the last 22 years.

For what it's worth, if you remove South Carolina from the equation because they used to be a member of the ACC, the top 5 SEC schools in number of games against the ACC are 1) Georgia, 2) Florida, 3) Auburn 4) Tennessee and 5) Vanderbilt. Naturally, these numbers are skewed because a lot of the games were against Georgia Tech, who used to be in the SEC but is now in the ACC, and every game against them by a SEC team is considered to be against an ACC team by CFB Data Warehouse.