The Top 11 Worst Coaching Performances in the 21st Century

Share All sharing options for: The Top 11 Worst Coaching Performances in the 21st Century 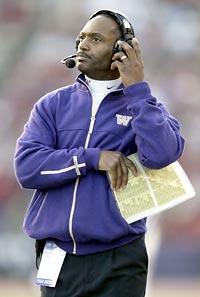 The worst this millenium?

This is a good one I saw this week. Baby Tate over at Bleacher Report recently compiled his list of the top 11 worst coaching performances of the 21st century. Why eleven? Because twelve is too many and ten is too few. Seemingly, the only qualification is to have significant coaching experience in this current decade, and to have sucked while doing it. Also, the list seems to compile the worst jobs at a single stop on the coaching carousel rather than a whole body of shoddy work.

9) Dennis Franchione, Texas A+M: 32-28 You don't need an insider newsletter for a record like that.

8) Mike Shula, Alabama: 26-23 Maybe the Tide should have nodded to Croom when they had the chance.

6) Mike Dubose, Alabama: 24-23 Another alumnus coach failing at the Capstone.

.
Not seeing your favorite coach? Tate defends a few:

Mike Price, Alabama: Because Mike Price is a good coach. For all you Red Elephants out there, just recall that Price never lost a game as the head coach of Alabama.

Bill Doba? Sylvester Croom? Come on, these two guys worked miracles to keep the towns of Pullman and Starkville competitive. You don't see many big names lining up to take those jobs.

Charlie Weis? He took Notre Dame to two BCS Bowls in his first two seasons in South Bend, going 19-6. Nick Saban didn't do that at Alabama, and Saban is 19-8 after two years in Tuscaloosa. You want Weis on the list? Fine, Saban is going with him.

Karl Dorrell was able to leave his imprint at UCLA during the past decade by having two winning seasons in five years. It seems to help your reputation if nothing is expected of you and your program has not won a national title since the Dodgers were in Brooklyn.

ACC fans are no doubt panting for Chan Gailey and Tommy Bowden. Gailey had a winning season all six years he coached at Georgia Tech, and Bowden never had a losing season at Clemson. So much for appearances.

Miami's Larry Coker? Larry Coker has to be the worst Miami coach. No comparison to the smiling, glad-handing, ship-jumping Butch Davis. See folks, Davis is 63-33 in his career while Coker is only 60-15. Wha?