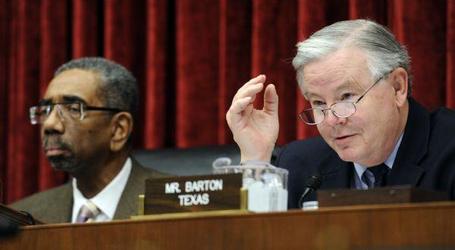 Mr. Jacobs, we called you to appear in front of us today to explain your cowardice in scheduling more than one OOC BCS team in a single season. That's not what the gentleman from Tuscaloosa would have done...

Last week in the US House, with little fanfare, two congressmen held a hearing to bring attention to the notion of changing the BCS format to become broader and more inclusive to teams not in the historically big conferences. Representatives Joe Barton (R-TX) and Bobby Rush (D-IL) lead the hearings designed to force not a tweaking of the current system, but a general overhaul designed to turn the BCS up on it's ear. Presumably, Barton, from Texas, has an axe to grind with the Longhorns allegedly getting hosed last year by being left out of their conference championship game. We might have to assume he truly is a CFB fan or a non-partisan politician because as a Texas A+M alum, it's hard to imagine him lobbying for anything favorable to the Burnt Orange. For Rush, perhaps he's just trying to ride the coat tails of another Illinois politician, President Obama, who has voiced concern on this subject.

It appears that the new angle they're working is the introduction of a bill in the house that would preclude the attachment of the phrase National Championship to any game who's participants weren't decided through the use of a playoff system. Taking a cue from Nick Saban's grandiose and often inappropriate comparisons of historical events and football, Barton compared the current BCS model to communism:

It is like communism; you can't fix it," Barton said. "Sooner or later, you are going to have to try a new model."

No word yet if it's going to take a Pearl Harbor or 9/11 type impetus to provoke this change.

Barton also told ACC commissioner and current BCS director John Swofford that he will aggressively push this bill if he doesn't see a serious effort begun in the next two months, which coincidentlly, is the exact same interval it normally takes for teams to decide which cleats they're going to purchase for the next season. Perhaps the honorable Mr. Barton is unaware of current BCS agreements and conference television contracts that don't come up for a few years, leaving the best window for a 4-team playoff to arrive somewhere around 2013. But seeing how the government now fires CEOs of private companies and decides which employees of the same firms can receive what compensation, I am seriously not wont to doubt them at this moment.

And perhaps the most disturbing relevation in this article is either the fact that the Mountain West Conference has actually hired lobbyists in Washington to push through their version of reform, or their plan itself, which includes the scrapping of the human and coaches polls and the computer polls and having playoff participants selected by a committee of 12 individuals. Are you kidding me? Because 62 AP voters, 119 coaches and a few algorithmic programs aren't supposed to be as objective as a gang of twelve? Have they lost their ever-loving minds?

For those of us who do want to have a realistic playoff introduced as soon as possible, perhaps the notion of having Congress give a little jolt to the process may not seem like a bad idea, but when have you ever seen government pull out of something once they got in? Yea, that's what I thought. Just like budgets and spending never get cut, Congress dallying in events they have no business in can seldom be curtailed.

And from the home office in Atlanta, GA, today's Top 10 list of things we can expect from the federalization of college football:

5) Players reclassified as federal employees. They unionize and get workers comp benefits

1) New Playoff marketing slogan: Games we can believe in!