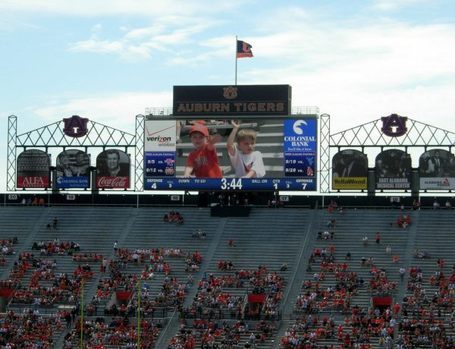 War Eagle, everybody! There's nothing like the doldrums of the off-season, is there? It seems like it's going to be an ETERNITY till we see 'em kick off, doesn't it? In the coming weeks, I'll be reprising my series from this time last year, previewing Auburn's upcoming football opponents. Before doing that, I suppose the correct thing is to do the same for Auburn, previewing the Tigers. Do I WANT to spit out another gloom and doom depth chart, and moan about the current state of affairs in the Auburn football program? Absolutely NOT! Suffice it to say that we've been in this boat before, Tiger fans...

Looking over this season's roster, and reviewing my notes, I found that there's something awfully familiar about the situation coming out of spring ball. This fall will be my 50th season of Auburn football, in my lifetime. And I've seen this show before!

I remember a year, back in the last millennium, when championships were a fading memory. Our championship coach had resigned, in the wake of trouble, and a shutout loss to Alabama. There had been a disappointing season or two, before the changing of the guard. The cupboard seemed to have become bare in just a few short years. A number of great coaching names were bandied about, but in the end, Auburn hired a real head-scratcher of a candidate to run the program, a lower-division coach that would be the youngest Auburn head coach in history.

Spring drills were pretty depressing, that year. The quarterback situation was up in the air. Folks were transferring out of the program left and right. The linebackers were green as could be. The wide receivers could not catch a cold, and there were pretty danged few of them to begin with. Weren't many offensive linemen, either, although the few we had did have some potential. Had a few veteran backs returning, but none of them had been a big-play guy in the past. Team depth was such that A-Day was pretty much only a controlled scrimmage. Sound familiar?

The new coach had managed to come up with a few signing day surprises, and had wowed a lot of folks with his assistant coach hires. There was a renewed emphasis on physical football, and fundamentals. While everyone was ready to move forward, few folks expected Auburn to have a winning record, that year. Alabama had won 12 games the year before. Ole Miss was returning perhaps the nation's top defense. Arkansas had hired a national championship coach to return them to glory. Mississippi State had been to two straight bowls, and was ready to take the next step. LSU survived a promising quarterback's crazy freshman year, and now was expected to make some noise. The SEC West looked like an absolute meat-grinder! Have you figured out what year I'm reminiscing about?

So, we'll compare that Auburn team, and the one we have now. On the defensive line, we had a few players. There was one star in the making, Damon Primus. Kind of like Antonio Coleman is now, poised for an All-SEC season. Depth would be an issue, but good moves were made, including moving over-sized linebacker Mike Pelton to defensive tackle. With the help of newcomer juco Gary Walker, Auburn was pretty stout up front. Nick Fairly could well be that guy, in 2009.

At linebacker, Auburn was a mess. All-SEC phenom James Willis had cut and run after his junior year. The two returning starters had been true freshmen the year before, Anthony Harris and Terry Solomon. Depth would consist of converted fullback Joe Frazier, and incoming true freshmen. Out of nowhere, walk-on Jason Miska arose, to start. Behind Stevens, and Bynes, Auburn is equally young, in 2009. Who will Ted Roof find, to come out of nowhere?

The secondary on that team of the past was a unit that had been bloodied the year before, and had some experience. Then, the best cover corner, senior Fred Smith, blew out a knee and was lost for the season. Safety Chris Shelling was hastily moved from free safety, to shore things up. A young guy named Brian Robinson was thrown into the mix, and everyone had their fingers crossed. Auburn's got some experience in the secondary in 2009, but there are injury issues there, too.

Auburn had capable a capable punter and kicker that year, in Terry Daniel and Scott Etheridge. We've got Clinton Durst, and Wes Byrum, who should be equally great! That year, Auburn needed good special teams play, and we'll need it again in 2009.

The offensive line in that past season was part green, part veteran. Guys like Wayne Gandy and Anthony Redmon had been starting for what seemed like forever, and were poised for break-out years. Young Shannon Roubique and Jason Taylor had been through rough freshman seasons, and were set to improve. For a while, it seemed like Todd Boland was the only other lineman we had, but young Willie Anderson stormed onto the scene with the incoming freshman class, and the line paved the way for an impressive 221 yards rushing per game. The 2009 Auburn line has veterans like Lee Ziemba and Ryan Pugh returning, and a similar lack of depth. I think Jeff Grimes can work the same magic Dick Trickett did, way back when.

Auburn's receiver corps situation was dire in that past season. The leading receiver, Orlando Parker, had transferred to Troy. The other starter, Thomas Bailey, had spent part of the previous season eating all of his meals through a straw, due to a broken jaw. Auburn had a big-time prospect returning for his junior year, but the guy, Frank Sanders, had so far been a mess of back injury and dropped balls. Could Tim Hawthorne be the "next Frank Sanders?" Beyond Sanders and Bailey, it was nothing but walk-ons and freshmen. As to the blocking skill positions, tight end and fullback, Auburn returned two 2nd year guys, Andy Fuller and Derrick Dorn; and the solid senior Tony Richardson. The 2009 edition of the Tigers has a similar situation, with John Douglas, Tommy Trott, and Mario Fannin.

By now, of course, most Auburn fans are surely aware that I'm comparing the 1993 and 2009 pre-seasons. At running back, Auburn had found a hard-nosed starter in James Bostic, but we didn't know who'd really back him up. There were flashy names, but no experience. Stephen Davis was an all-world recruit, but how would he do in college football? One half of the experienced depth, Otis Mounds, had moved to safety. The other guy, Ted Yarborough, had transferred to Troy. Ben Tate's that guy, in 2009. Whatever you might think of Auburn's offensive woes of the past 3 years, Tate has NOT been the problem!

At quarterback, the incumbent was a guy most Auburn folk had given up on. Stan White had been through several coordinators, several bad seasons (not all Stan's fault, lotta dropped balls!), and a devastating Iron Bowl performance the year before. Behind Stan was nothing but green. It's really not unlike Kodi Burns' story to date, here in 2009.

Despite all the shortcomings on paper, the 1993 Auburn Tigers won every game they played! It took a hungry group of players, playing as one unit. I think we have that kind of chemistry on the current team, and a similar opportunity, this year!

Yes, 1993 was a magical season, but incredibly, I think we have even more upside, this year. In 1993, Auburn was fighting though probation. The current staff has no such handicap. I've often said that Terry Bowden assembled the greatest set of teachers in Auburn history, and expected Joe Whitt and Rodney Garner to do ALL of the serious recruiting. Gene Chizik has assembled an equally excellent teaching staff, with a LOT more seriously good recruiters. Coach Chizik seems MUCH more inclined to allow his assistants to shine, and to implement their ideas, as evidenced by the resounding success of the Auburn Tiger Prowl this past week!

We're in for quite a ride, this year. I see no reason that Auburn can't be the surprise team of the SEC, in 2009. There are a lot of fine, hard-working young men in place, and a coaching staff second to none. I think it's a great time to be an Auburn Tiger!