Share All sharing options for: Alabama Sanctions Finally In 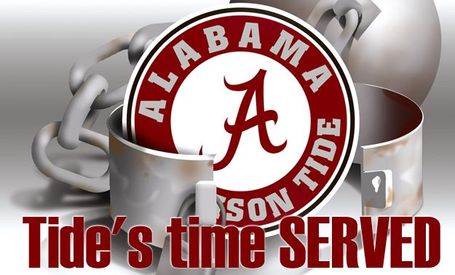 After being leaked yesterday, the findings of the NCAA investigation into the University of Alabama's self-reported textbook scandal are finally in. There are no scholarship losses or post-season ban in any of the 16 sports involved in the investigation, which centered around 200 different athletes. Instead, Alabama will be forced to vacate victories in select sports where ineligible athletes participated, including some football games from the 2005, 2006 and 2007 seasons.

As a repeat offender, the University will remain on probation for an additional three years. Of all the athletes investigated, 125 were found to have unintentionally violated the textbooks policy, which generally meant that the value in each case was under $100. Only 22 athletes were found to be intentional wrongdoers, with 14 coming from the track team, 7 from football and 1 from tennis. The monetary amount of the violations ranged from $32 on the low end to almost $4000 on the high end. Alabama will also have to pay a fine to the NCAA of almost $44,000.

Although the NCAA considered heavier sanctions against Alabama, they praised the school for coming forth on their own. It is entirely possible that the penalties would have been much more severe had the violations occurred in a single sport as opposed to be spread out in all sports across the board.