SPUAT Fought The Law... And The Law Won - Again!

Share All sharing options for: SPUAT Fought The Law... And The Law Won - Again! 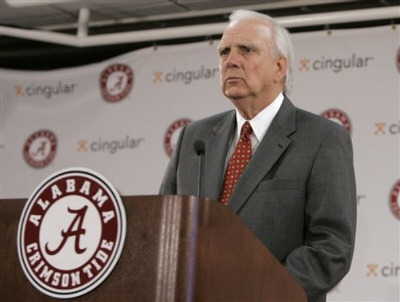 Turn out the lights... The party's over?

Anytime Alabama loses 21 football games in a day, it's not an entirely bad week. Yesterday's sanctions levied by the NCAA on Alabama are being hailed by many as too lenient. Personally, they feel about right. A couple of scholarships taken away would have put a cherry on top; but don't be fooled - these sanctions will leave a lasting mark on this once proud program.

With Thursday's punishment, Alabama is now undeniably the most corrupt athletic program in the country over the past 15 years and ranks just below SMU as the most maligned college football program in NCAA history. The punishment is a major embarrassment to all Alabama alumni and earns their school a reputation that will be around for years to come.

What effect do the sanctions have on the Auburn-Alabama rivalry? Essentially none. Both schools will line up against each other the day after Thanksgiving and the happenings of yesterday will be the last thing on either team's mind. But there is one caveat to all of this. The much dreaded repeat offender status remains and that could have a huge effect on the future of the Alabama football program.

It's widely believed that the NCAA continues to snoop around the Gadsden area looking for more violations by Alabama boosters. As much as Paul Finebaum tries to down play the story, it's not going away. Much like USC, this is a cloud that got much darker yesterday and is likely to stay above the Mal Moore Athletic Complex for several years to come. It's a dangerous situation for Alabama officials and one that could have devastating consequences if proven true.

The coming months will be interesting around the Tuscaloosa campus. What are the Vegas odds on Mal Moore surviving past the end of this calendar year? Expect to see Moore's retirement announced in the weeks ahead. While he had no direct role in this case, he ultimately will be held responsible as head of Alabama Athletics. May I suggest Bob Bockrath as a suitable and capable replacement?

As of today, Alabama becomes the first SEC school to lose to Louisiana-Monroe in consecutive seasons. Now I don't care who you are, that's funny. Come to think of it, they may be the only SEC team to ever lose to a Louisiana directional school. But I digress.

There's not much else to say about the story. It's what it is. Much more important to Auburn fans is how summer workouts are going, how the freshmen are getting acclimated and who the quarterback will be. Some Alabama fans like to say Auburn people are obsessed by the story. I'd say it's more amusement than anything else.

Our sympathies go out today to the family of Auburn Swim Coach Richard Quick who passed away on Wednesday. Quick will be remembered as one of the top swim coaches in NCAA history. His battle with cancer inspired the entire Auburn family. Even in his absence this past season, his spirit was an inspiration to the Auburn men's team who captured the 2009 NCAA National Championship.

"Richard's passing leaves a tremendous void, not only in the swimming community and the Auburn family, but to those individuals who he touched the most," said Tiger Interim Coach Brett Hawke said. "It would be in Richard's greatest honor to not dwell on his loss, but to celebrate his life and the characteristics he embodied, which were his perseverance, compassion and his humanity."