Ten College Football Personalities We Can Do Without

Share All sharing options for: Ten College Football Personalities We Can Do Without 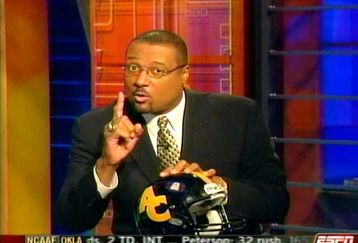 Today we continue looking at the best and worst television personalities in college football. Many of you had some great comments from Monday's post and pointed out a few good ones that were left off the list - Jill Arrington being the biggest omission.

We'll finish up by looking at the ten worst television personalities in college football. By my judgment these are a few of the big names we could all do without. As always, feel free to jump in and give your two cents.

Gary Danielson - The former Purdue and Detroit Lions quarterback has always seemed like a strange choice for SEC football. Taking over for Todd Blackledge after he bolted for ESPN, the CBS color analyst struggles to relate to southern viewers. Maybe it's his Big 10 upbringing or his northern accent. Whatever it is, it just doesn't play in Dixie. While Blackledge has bonded with SEC fans, Danielson is just not a fit.

Kirk Herbstreit - When Herbstreit initially took over for Craig James on College GameDay, he seemed to be the perfect replacement. He knew his football and came across as a guy you wanted to have a beer with and watch the game. As his popularity has grown, the more pompous the former Ohio State quarterback has become. These days he's plain nauseating to watch.

Holly Rowe - Some things in life you just can't explain. Holly Rowe fits in that category. How she continues to get the top games as sideline reporter on ESPN ahead of Erin Andrews and Bonnie Bernstein is one of the great mysteries of television. It's a question that many drunken men have asked themselves on Saturday nights in the fall.

Spencer Tillman - The former Oklahoma Sooner star wears more makeup on set than Boy George did in 1986. Serving as Tim Brando's sidekick on the CBS College Football Show, Tillman's comments are often overshadowed by his unusual look. Lose some of the makeup Spencer and you may work your way off the list next season.

Lou Holtz - It's still hard to believe this guy won a national championship at Notre Dame and is a best selling author. Believe it or not kids, in his day he really was credible.

John Saunders - Very few Canadians can do college football right. Saunders joins former Florida quarterback Jesse Palmer as a north of the border strikeout. As studio host for the ABC College Football Pregame Show, Saunders teamed up with former Auburn Coach Terry Bowden to create one of the worst duos in sports history. Thankfully, the network took mercy on its fans and exiled Bowden a few years back. Unfortunately, Saunders remains.

Pam Ward - The Maryland graduate holds the distinction of having the most annoying voice in all of college football. Serving as play-by-play person for ESPN's early Big 10 telecasts on Saturday afternoon, she's been called a pioneer. Others just call the experiment a train wreck. Hasn't the Big 10 been through enough already?

Mark May - Is there a more bland voice in all of college football? One of the hot new drinking games on college campuses these days is to take a shot of liquor every time May references his playing days at Pittsburgh. I believe Bruce Springsteen's Glory Days was written with him in mind.

Andre Ware - Nothing says "this game sucks" more than seeing Ware as part of the broadcast team. Maybe the former Heisman Trophy winner is not so bad. I guess if I was tasked with talking about Syracuse and Buffalo every week, I'd be just as boring. Ware makes the list, but just barely. There's still hope for the old Houston quarterback.

Desmond Howard - Simply put, the former Michigan great is just plain bad. Of all the talent out there, how ESPN settled on him to be the fourth man on its franchise college football show is beyond me. Who would have thought that Heisman pose in Ann Arbor back in 1991 would be a gravy train for years to come?