Share All sharing options for: Bowden Still A Lightening Rod In Alabama 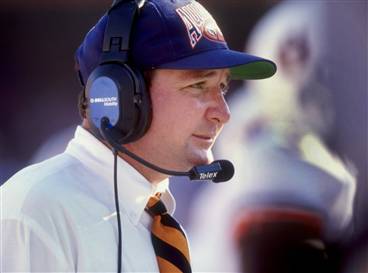 Has it really been 16 seasons since Terry Bowden first came to Auburn?


In the months since Tommy Tuberville's resignation, there have been a lot of stories written about his place in Auburn history. Where does he rank? How will he be remembered? Like the presidency - and I'm in no way comparing the two jobs - it takes years before one can objectively look back and determine where an Auburn coach fits in the history of the program.

Birmingham News columnist Kevin Scarbinsky wrote two excellent pieces yesterday on former Auburn Coach Terry Bowden. The feature story looks at Bowden's new job as head coach at North Alabama and also takes a peek back at his days on the Plains. In his column, Scarbinsky talks about the parallels to Bowden's hiring at Auburn in 1992 and the surprise pick of Gene Chizik in December.

As shocking as Chizik's hiring was, Scarbinsky argues that it wasn't nearly as surprising as Bowden's arrival at Auburn 16 seasons ago. "Chizik isn't the most unlikely Auburn coach of the postmodern, post-Bear era," writes Scarbinsky. "Chizik isn't even the most unlikely Auburn hire currently coaching in this state. Bowden himself earned and retired that title when, in December of 1992, he traveled down Highway 280 from Samford. A lot of people didn't think he had a prayer."

Bowden's hiring was a surprise. The choice of Chizik was the shock of a lifetime. Maybe that's more of a testament to Tuberville's success than the won-loss records or the level of competition the two coaches in question faced before arriving in Auburn.

Now that 16 seasons have passed since Bowden first arrived on campus and all of the emotion of his success and failures have been given time to age, where does Bobby's son fit in the history of Auburn Athletics?

His tenure is one of the more interesting in Auburn history. Because he didn't even last six seasons, Bowden can never be viewed as anything more than a transitional coach. Yet he guided Auburn to one of only three undefeated seasons in school history. The unbeaten year of 1993 remains the most improbable in Auburn history.

Winning his first 20 games as head coach at Auburn is something that is likely never to happen again in major college football. Had it not been for wide receiver Karsten Bailey inexplicably dropping two key passes in the 1997 SEC Championship Game, Bowden could have laid claim to two conference titles in five seasons (due to probation, Auburn was ineligible in 1993).

Bowden's success came at a time when Steve Spurrier was the toast of the college football world and Peyton Manning was under center at Tennessee. These weren't exactly down years for the SEC.

Critics of Bowden point to his inability to recruit. There's little arguing that by the end of his tenure in 1998, there was not a lot of talent left on campus. Despite winning 10 games the year before, his final team was a shell of what he inherited a few years earlier.

How bad was the 1998 team? Current Major Leaguer Gabe Gross lead the team in passing with 1222 yards and Michael Burks was the leading rusher with 483 yards and no touchdowns. Bowden started the 1998 season 1-5 and abruptly quit the day before the Louisiana Tech game. It was a move that has made him a lightening rod in the state of Alabama to this day.

Many believe the accusations made about him quitting on his team cost him another opportunity in Division 1-A football. To this day, Bowden still insists he made the right move, quitting then rather than waiting to be fired at year's end.

While it's approaching nearly two decades since he first came to Auburn, Bowden remains highly unpopular in Auburn circles. Time has allowed him to get his due for what he accomplished in his early years. Unfortunately for him, the decision to quit on his team halfway through the season will be his lasting legacy among Auburn fans.