Auburn to Wrestle the Hogs on New Carpet

Share All sharing options for: Auburn to Wrestle the Hogs on New Carpet 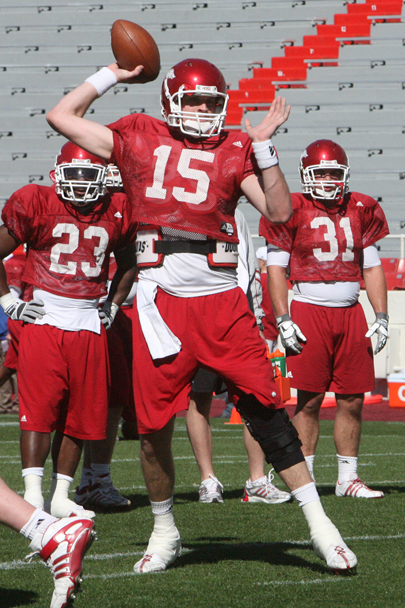 Ryan Mallett hopes to be the next great Petrino quarterback!

War Eagle, everybody! It's time for another Auburn opponent preview. This week, the Arkansas Razorbacks are featured. On October 10th, Auburn travels to Fayetteville, to face the Hogs on the new artificial turf in Reynolds Razorback Stadium. It will be the second road game in as many weeks, as Auburn moves through a grueling October. Auburn faces 5 SEC teams in 5 weeks, three of which are on the road.

Arkansas will be battle-tested, by the 10th of October. The Razorbacks open with Missouri State, followed by an off week, then Arkansas jumps right into the fire, hosting Georgia. Following that, Arkansas goes on the road to play Alabama and Texas A&M, before hosting the Auburn Tigers. Arkansas expects to show a much-improved team in 2009, with 18 starters returning. Some of the losses, though, are big, including center Jonathan Luigs, and veteran quarterback Casey Dick.

Defensively, the Razorbacks were suspect last season, giving up 31 points per game. Arkansas had particular trouble stopping the run, but all of the front seven starters return this year, and they should be stronger. Two or three starters in the secondary have to be replaced, but there is talent there, and candidates to get the job done. The unit showed some improvement in spring drills, but gave up some big plays in the spring game. Auburn should bring a vastly improved running game into this year's matchup.

Special teams were spotty for the Razorbacks, a year ago. Freshman phenom kicker Alex Tejada had a sophomore slump, hitting only 4 of 9 field goals. Kickoffs were a bit of a problem, with short kicks, and good opponent returns. Returns were respectable, as Dennis Johnson set the Razorback single-season kickoff return record with 905 yards. The Razorbacks lose solid punter Jeremy Davis. Arkansas hired former Michigan State coach John L. Smith to shore up the special teams, this season.

It was no real surprise, that the Razorbacks were better than expected offensively in Bobby Petrino's first season. The Razorbacks had an efficient, balanced offense, when tailback Michael Smith was healthy. Smith rushed for 1119 yards last season, and had 32 receptions. He's a shifty, dangerous weapon, returning for his senior season. Smith did sit out spring drills this year, with a tweaked hamstring. All of the receiving corps returns, and it is deep, led by junior tight end D. J. Williams, who had 61 catches in 2008. The leader after spring drills, in the quarterback race, is sophomore Ryan Mallett, who transferred from Michigan last season. Mallett was 3-0 as the Wolverines' starting quarterback in 2007. In the Arkansas spring game this year, Mallett was 15-26 for 233 yards, with two picks.

Auburn defensive line vs. Arkansas offensive line: The line is the strength of the Auburn defense, and the Tigers should be tough across the front, with a bit of depth as well. The Petrino offense a year ago, however, did a great job of neutralizing that strength. Auburn only sacked the quarterback once, and allowed Michael Smith 176 rushing yards. The Razorbacks return 3 starters, including mammoth junior left tackle Ray Dominguez. It's a big, strong line, averaging 312 pounds per man. Advantage: Even.

Auburn linebackers vs. Arkansas runners: Last season, we expected speedy Auburn linebackers to shut down Razorback runner Michael Smith. It didn't happen, and the Auburn linebacker corps this season is the thinnest it's been since 1993. Not only does Smith return for his senior season, but the Razorbacks return all of their top 5 rushers from a year ago. Advantage: Arkansas.

Auburn corners vs. Arkansas receivers: Auburn should be solid at corner with Walter McFadden and Neiko Thorpe starting, and depth behind them. A year ago, Auburn was banged up here, and died a death of a thousand cuts on trademark Petrino-offense crossing patterns. If healthy, Auburn should be able to jump a few of those, and keep the middle of the field from being such a comfort zone. The Arkansas receivers who did the carving of Auburn's defense all return. Senior London Crawford is a tall target that Auburn had trouble matching up with a year ago. Sophomore Joe Adams, on the other side, gashed Auburn last year for 4 catches and 60 yards. Adding depth is 6' 3" sophomore Greg Childs, who had a great spring. Advantage: Arkansas.

Auburn safeties vs. Arkansas secondary receivers and quarterback: Auburn should field a pair of solid safeties in Zach Etheridge and Michael McNeil, but they'll need to be more aggressive than they were a year ago. Arkansas is loaded with inside receivers. Besides stellar tight end D. J. Williams, the Razorbacks have slot receivers such as sophomore Jarius Wright, and senior Reggie Fish. Both can move. Ryan Mallett is the likely starter at quarterback, for the Razorbacks. Mallett continues to have off-season issues, including a public intoxication arrest in March, and a broken finger on his throwning hand, early in June. The Arkansas coaches insist that he'll be ready to play this fall. Mallett should be over any "new starter" jitters by the Auburn game, and there is little doubt that offensive guru Bobby Petrino will have him in the best position to make plays. Advantage: Arkansas.

Punting: Auburn returns Clinton Durst, who had a great first year, averaging 42.1 yards per kick, and the coverage was good, giving up only 7.0 yards per return. Arkansas used several return men last year, and none did well. Jarius Wright is the leading guy coming back, and he had six returns for only 15 total yards. Who's going to punt for Arkansas this year, is not settled. Junior Stephen Barnett handled the job this spring, but was not terribly impressive. Incoming transfer Britton Forester, from Hawaii, may be the man. Quarterback Ryan Mallett punted once in the spring game, hammering the ball 48 yards. Arkansas covers punts well, giving up only 5 yards per return. Auburn has yet to decide on a return man, where there is no experience. There are a lot of unknowns in this equation. Best guess? Slight Advantage: Auburn.

Kickoffs: An Auburn problem area for the past two seasons, the Tigers look to improve here. Wes Byrum averaged kicking the ball off to the 3 yard line in the A-Day game, and Auburn did hire special teams guru Jay Boulware to help improve a coverage unit that gave up 21.5 yards per return. Auburn has options for return men, including junior Mario Fannin, who averaged 22.5 yards per return a year ago. Arkansas had difficulties kicking off last season, also. Alex Tejada only averaged kicking the ball to the ten yard line, and Arkansas gave up an ugly 24 yards per return. Arkansas returns record-setting sophomore Dennis Johnson to return kicks. Of course, when you give up 374 points on the season, the kick return man gets a lot of opportunities. Johnson averaged 22.1 yards per return. Advantage: Auburn.

Placekicking: Both schools' followers hope that their kickers return to freshman form. Both kickers were 17 of 23 as freshmen. Wes Byrum slumped to 11 of 19 last year, and Arkansas' Alex Tejada hit only 4 of 9. Since Byrum was slightly better, it's Slight Advantage: Auburn.

Auburn backs vs. Arkansas linebackers: Like a year ago, Auburn has dangerous backs. Against Arkansas last season, those backs were not used, as Ben Tate only tallied 8 carries, and the team had only 13 running back carries in the game. It was a monumentally stupid game-planning decision, to keep the ball away from our best offensive players, against Arkansas' supposed weakness! One HAS to figure that this year's Auburn offensive coordinator Guz Malzhan will do a better job. Ben Tate appears poised for a great senior season, and Auburn has a variety of options behind him. Arkansas returns all of their starters at linebacker, junior Freddy Burton, senior Wendel Davis, and sophomore Jerry Franklin. All three have gotten bigger and stronger, in the off-season, after taking some lumps a year ago. Advantage: Auburn.

Auburn receivers vs. Arkansas corners: Both teams will field some new faces, in this matchup. Auburn is currently led by junior Tim Hawthorne, and does return experience in senior Montez Billings. Arkansas returns junior corner Issac Madison, who capable, if not spectacular. The other corner spot is projected to be filled by junior Ramon Broadway. Junior Jerell Norton should see plenty of playing time, as he's the only corner in the playing rotation taller than 5' 10". Advantage: Even.

Auburn secondary receivers and quarterback vs. Arkansas safeties: Auburn will have some formidable slot receivers to send onto the field with, including senior tight end Tommy Trott, and junior H-back Mario Fannin. Quarterback will be the million-dollar question for the Auburn offense. Arkansas will be young, but talented. Sophomore free safety Elton Ford got his feet wet a year ago, but injured his neck against Tulsa. He missed spring drills, still rehabbing. Senior Matt Harris brings experience. He had 49 tackles last season, playing in all 12 games. Sophomore Jericho Nelson, who played in 10 games, is also in the mix. Slight Advantage: Auburn.

Tallying up the matchups, it looks like offense is the word. This game may be very high-scoring. Last season, Auburn had great difficulty getting the Arkansas offense off of the field. The Auburn offense had chances to win the game, but couldn't get it done. It's worth noting that the Razorback game a year ago was immediately after the Franklin firing, and the team's mental situation was hardly ideal. This year, Auburn will need to be able to tote the rock consistently, move the chains, and avoid turnovers. Auburn should be better on special teams, but stopping the Petrino offense will be a tall order. Traveling to remote Fayetteville is always a challenge.