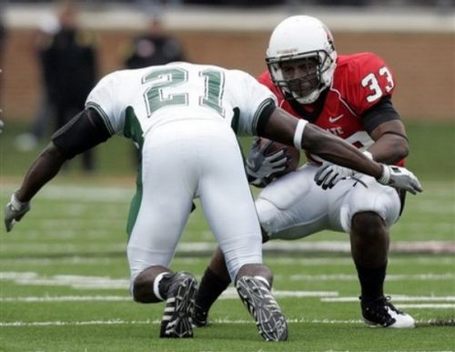 (Note: The things we have to go through for progress, eh? SB Nation has evidently redesigned their edit panel, and it now spews links and weird formatting like crazy! Please bear with me on this! Some programmer somewhere doesn't comprehend "readability..." Unfortunately, too, a fair amount of the links are wrong, and unchecking them doesn't stop them. So if you click the "Cardinals" link and it takes you out west to Stanford, it's not my fault!)

War Eagle, everybody! It's time once again, for another look at an Auburn opponent in the upcoming football season. After a pair of tough, home battles with Mississippi State and West Virginia, Auburn hosts the Ball State Cardinals. 11 starters return this season, from the 12-2, Mid America Conference runner-up team. The Cardinals took a hit last season, when head Coach Brady Hoke left at the end of the season, to take the head job at San Diego State. Hoke, a 1978 Ball State grad who played on the last Ball State championship team, left his alma mater before an appearance in the GMAC Bowl. Ball State promoted from within, and offensive coordinator Stan Parrish took over as the head man. Parish's debut was not a pleasant one, as the Cardinals were blown out by Tulsa, 45-13. The season ended on a two-game losing streak.

The Cardinals will come into Auburn with a possibility of being 3-0. Ball State begins with a pair of home games, against North Texas and New Hampshire. A challenging road trip to Army follows. The Cardinals will be looking for a measure of revenge, in Auburn. In last year's GMAC Bowl, Auburn offensive coordinator Guz Malzhan's Tulsa offense ripped the Cardinals for 632 total yards, including 439 on the ground! With 7 defensive starters returning, Ball State has junked Hoke's 3-4 defense, and installed a more aggressive scheme. Doug Graber, an NFL coaching veteran and secondary expert, has gone to a 4-3 defense, but so far has not been happy with his team's execution. Graber has a veteran front seven to work with, including All-MAC senior defensive end Brandon Crawford. The secondary returns a veteran pair of safeties, but will be green at corner.

Ball State was respectable on special teams last season, but must replace stellar punter Chris Miller. Also, the status of the excellent returning place kicker, Ian McGarvey, is in question, due to a DUI arrest. McGarvey didn't participate in spring drills, and is not listed on the roster.

On offense, the Cardinals return only 4 starters, but one of those is the fireplug running back, MiQuale Lewis. The 5'6", 190 pound back rushed for over 1700 yards in 2008. The Cardinals also return several good receivers, but must replace record-setting quarterback Nate Davis, who left early for the NFL draft. The offensive line was decimated by graduation, returning only one starter. New quarterback Kelly Page has talent and a good arm, but he spent much of spring drills running for his life. The offensive system should remain basically the same as a year ago, but Lewis and the receivers must be productive, to keep opponents from loading the box. Serving as offensive coordinator this year, will be promoted running backs coach Eddie Faulkner.

Auburn defensive line vs. Ball State offensive line: On paper, this is a mismatch. Ball State's one returning starter is guard, junior Michael Switzer. Ball State will have to deal with quick ends such as Antonio Coleman, Michael Goggins, and Antoine Carter, with new tackles. Only two of the new starters have even earned a letter! There may be some hope to match up inside, against Auburn's duo of Mike Blanc and Jake Ricks, but sophomore center Kreg Hunter and redshirt freshman guard Steve Yoder will have their hands full. Most of Ball State's linemen are undersized, by SEC standards, at about 280 pounds. Big Advantage: Auburn

Auburn linebackers vs. Ball State runners: This matchup features Auburn's thinnest unit against a 1700-yard rusher in senior MiQuale Lewis. Lewis is another one of those small, shifty runners who gave us so much trouble a year ago. Ball State does not allow him to be hit in practice, so he'll likely still be fresh for Auburn. The real question is who's going to block for Lewis. Ball State runs a lot of 3-receiver sets, and lead blocks with the tight end. Auburn may have to go nickel to deal with the receivers, but linebackers Josh Bynes and Craig Stevens should be aided by dominant D-line play in this one. Advantage: Ball State.

Auburn corners vs. Ball State receivers: Auburn returns a veteran, respectably deep unit, and they'll likely be tested by the Cardinals. Senior Walter McFadden should be fine, but there is worry beyond that at the relative inexperience of sophomore Neiko Thorpe and 5th year senior Aaron Savage. Ball State relies on sophomore Briggs Orsbon, who was the leading receiver a year ago. Senior Myles Trempe is a tall target, at 6' 4". One to watch out for is incoming freshman Seth White. White's a small former quarterback, but he can fly and is very athletic. He graduated early, participated in Cardinal spring drills, and rocketed up the depth chart. Advantage: Even.

Auburn safeties vs. Ball State secondary receivers and quarterback: One hopes that Auburn's 3 top safeties, all coming off of injuries, are healthy for this one. Michael McNeal and Zach Etheridge combine for 3 years of starting experience, and should be able to stay with Cardinal tight ends and slot receivers. Junior receiver Daniel Ifft has a lot of experience, and senior tight end Madaris Grant is a tall 6' 5" target. Grant's listed at only 221 pounds, and one wonders how well he'll be able to block for MiQuale Lewis. There is little experience behind those two. Redshirt freshman Kelly Page takes over at quarterback for the Cardinals. Page is a 6' 3", strong armed-specimen who was ranked as the 12th best quarterback in the nation in his recruiting class. Page has the arm and the legs to get it done, but will he have time? It will be incumbent upon the Auburn defense to try and shake the young quarterback's confidence. Advantage: Auburn.

Punting: Auburn returns one of the SEC's better punters in Clinton Durst, and a coverage unit that gave up 7.0 yards per return in the SEC. It's not clear who'll return punts, yet. Ball State has tapped redshirt freshman Scott Kovanda as their new punter. Kovanda averaged 39.0 yards per punt as a senior in high school. The Ball State coverage unit gave up only 6.2 yards per return in 2008. The Cardinals must replace the departed B. J. Hill at returner, and are still undecided as to who might fill that spot. Advantage: Auburn.

Kickoffs: Auburn appears set to utilize junior Wes Byrum as the kickoff man, and Byrum did well in spring drills, averaging over 65 yards per kickoff. Auburn's coverage unit gave up 21.5 yards per return. Ball State played the suspended Ian McCarvey and junior Jake Hogue equally, last season. Both averaged about 60 yards per kick. Ball State's coverage unit gave up only 19.8 yards per return. To return kicks, Auburn will likely use some combination of newcomer Onterrio McCaleb, and junior Mario Fannin, who averaged 22.5 yards per return a year ago. Ball State loses their top three kick returners, and is still undecided who the replacement will be. Advantage: Auburn.

Placekicking: Auburn's Wes Byrum was excellent as a freshman, and less than stellar a season ago, hitting only 11 of 19. Ball State's situation depends upon whether Ian McCarvey can return, or not. McCarvey hit 16-21, including 6-9 from 40-49 yards! If McCarvey can't come back, the job falls to junior Jake Hogue. Hogue kicked in 2007, and hit on a Byrum-like 11 of 19. Advantage: Even.

Auburn offensive line vs. Ball State defensive line: Auburn should field a veteran line, with plenty of experience, and a potential star in Lee Ziemba. There is little depth, though, and if there is anything to worry about with the starters, it's right tackle Andrew McCain's lack of starts in his previous four Auburn years. Ball State returns seven letterman on the defensive line, including all four starters, one of which is 33-year old 5th year senior defensive end, Brandon Crawford. A Marine Corps veteran, Crawford is a good one, but he's been battling wrist problems for the past year. Junior end Robert Eddins is fast, but listed at only 221 pounds. Lack of SEC size could hurt the Cardinals along the defensive front. Junior tackle Rene Perry is only 271, and senior Drew Duffin is only listed at 255. Auburn will outweigh the Ball State line by an average of about 40 pounds. Advantage: Auburn.

Auburn backs vs. Ball State linebackers: Auburn should be able to field a diverse and talented running corps, headlined by the senior, big Ben Tate. Tate's powerful, well rounded, and deceptively speedy. Auburn's question is lead-blocking, although Mario Fannin and John Douglas showed good stuff in the spring game. Ball State has experience and speed at linebacker, but size is again an issue. Junior Davyd Jones is only listed at 200 pounds, senior Spain Cosby is 212, and senior Sam Woodworth is 202. Advantage: Auburn.

Auburn receivers vs. Ball State corners: Both teams are in a rebuilding mode, in this matchup. Auburn's most experienced returning receiver is senior Montez Billings, and Billings missed spring drills. There were good things done by junior Tim Hawthorne, and sophomore Darvin Adams, this spring. Ball State has had to move some folks around to find starting corners this spring. Junior Koreen Burch holds down one spot, and sophomore Torieal Gibson has the other. Both are in the 5' 9", 160-pound range. Auburn's taller guys will be difficult to cover. Advantage: Auburn.

Auburn secondary receivers and quarterback vs. Ball State safeties: Auburn will field some veteran, dangerous secondary receivers, including senior tight end Tommy Trott, and junior H-back Mario Fannin, as well as some younger, speedy guys like sophomore Terrell Zachary. The Auburn quarterback situation should be settled by game 4, but it should not be an issue in this game. Auburn should be able to run at will on the smaller Cardinals. Ball State does return a pair of veteran, talented safeties, and should this game come down to airing it out, they will be a factor. Senior Alex Knipp and sophomore Sean Baker are ball-hawing, tackling machines. Both are around 200 pounds, similar in size to the Ball State linebackers. Advantage: even.

Ball State is over-matched on both lines of scrimmage, and will not fare well unless the Tigers suffer a big letdown after West Virginia. With a freshman quarterback and 4 new line starters, the Cardinals will find moving the sticks a challenge. Ball State does have some guys capable of making big plays, but it's unlikely to be enough. Auburn should be able to run at will, and against a fast-paced, no huddle shotgun running game, the Cardinals must guard against wearing down. Auburn may be stinging after a loss to West Virginia the week before, so look for the Tigers to take it out on the Cardinals.