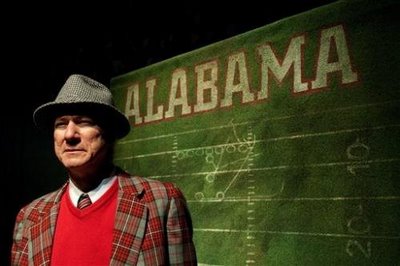 The Alabama Shakespeare Festival's play, Bear Country, about the life of legendary Alabama coach Paul Bryant and the last days leading up to his retirement, is coming to Birmingham later this summer after a successful run in Montgomery earlier this year. The play has been a rare hit for the ASF, which has suffered along with other businesses in these lean economic times. Previously, they had to cancel Les Miserables due to poor ticket sales. But for Bear Country, tailgaters have even shown up before events. No mention yet if Nick Saban will perform a stint as guest director. Seems he's too busy trying to write his own comedy/tragedy in Tuscaloosa.

So considering the success that the performing arts have received from the infusion of Crimson Tide lore, I think the Shakespeare festival can only benefit if we succinctly write the Capstone into your normal Shakespearean fare. Bama fans, not normally known for their love of the classics, can't be spoon-fed this culture knowingly . We have to give it to them subliminally, by slightly altering the Bard's dialogue to include the Alabama football references.

So what we do is to take some of the more common Shakepeare quotes from all his great works and give them the delicate re-write that will make them fan favorites from Legion Field to Bryant Denny. We're writing baby, we're writing!

"Friends, Bammers, countrymen, lend me your ears: I come to bury Tuberville, not to become finger number six!"

"Beware the national signing days that occur in March!"

"Cowards die many times before their deaths, but we lost to Louisiana-Monroe only once."

"Cry havoc, and let slip the dogs of war, and the recruiting limo stunt from your fingers..."

"All the world's a stage, but none smell like the urine and bourbon of Bryant-Denny!"

"To be or not to be, under NCAA investigation. THAT is the question..."

"Neither a borrower nor a lender be, especially as applies to player-provided textbooks."

"The lady doth protest too much, methinks. But can someone please give Collette Connell a ride home?"

"Give every man thy ear, and few thy voice, and you still won't be half the ear that Tuberville is."

"He that dies pays all debts, but still keeps his season tickets..."

"Now is the winter of our discontent, but we can start text messaging recruits after Christmas."

"A horse! A horse! My kingdom for a horse! But only a buck twenty for Albert Means?

"What's in a name? That which we call recruiting, at any other school, by any other name, would not pass the smell test."

"Parting is such sweet sorrow. We hardly knew thee, Tubs!"

"The better part of valor is discretion, of which Mike Price's strippers had none."

"What's mine is yours, and what is yours is mine, but neither of us will get our $4 million worth."