Around the Auburn Nation and the SEC

Share All sharing options for: Around the Auburn Nation and the SEC 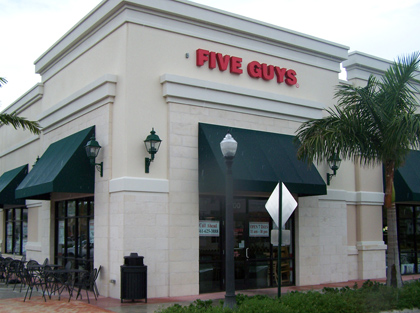 Auburn's Five Guys doesn't have palm trees, but the burgers taste the same.

Perhaps the biggest news to hit Auburn in recent weeks is the opening of Five Guys Burgers and Fries on College Street. Tonight I finally had the opportunity to taste it for myself. One word: Unbelievable. It's without question the best hamburger on the planet. There's really no need for discussion. The next time you are in town, point your car in that direction and don't stop until you have tasted the burgers and fries. You'll thank me later.

Around the Auburn Nation today brings us several good stories including articles on the Auburn quarterback battle and coverage of Tommy Tuberville's recent trip to the Middle East. The Auburner does a hilarious clip on booster Bobby Lowder and the Orlando Sentinel looks at Florida's legal problems....

The Auburner - Giving squirrels fake nuts since before you were born.

The Works, Thank you style - The Joe Cribbs Car Wash

Orlando Sentinel - From one to 24: Florida Gators database on legal troubles