Who is Derek Dooley?

Share All sharing options for: Who is Derek Dooley? 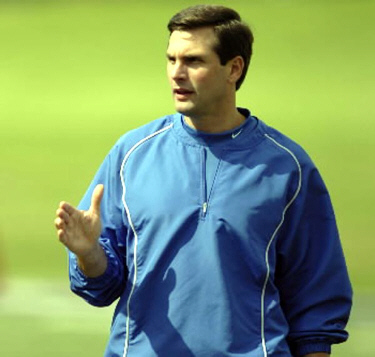 And we thought we were finished with Dooley and the Bulldogs.

There's something about returning from summer vacation that gets you focused on college football season. After a week in the Redneck Riviera and ample time on the beach to absorb all the preseason publications, I feel about prepared as I'm going to be heading toward September 5th.

After again reading Acid Reign's great Louisiana Tech preview, I wondered why I didn't know more about their coach, Derek Dooley - son of Vince. Maybe this was a blind spot for me, but truthfully, until Dooley became a candidate for the Auburn job last December, I vaguely knew he even coached college football.

Dooley Sr. has always been an interesting character to me. I've followed him throughout my life and to this day find it fascinating that a former Auburn quarterback under Shug Jordan would go on to be a legendary coach at his alma mater's second biggest rival. Even after a long 25 year career in Athens, there's still part of me that thinks of Dooley as an Auburn Man.

So who is this Derek Dooley? We know he accomplished something last season that few have done - win at Louisiana Tech. Leading the Bulldogs to an 8-5 record and an Independence Bowl win over Northern Illinois may seem modest at best, but when you are talking about football in Ruston, Louisiana this is pretty big stuff.

Dooley walked on as a wide receiver at Virginia and played under legendary coach George Welsh. He earned a scholarship his sophomore year - I guess Vince needed the financial help - and ended up playing in three bowl games and was part of the 1989 ACC Championship team.

He's no dummy. He was named first team Academic All-ACC and went on to earn a law degree from Georgia in 1994. I know what you are thinking - so did Terry Bowden. But Dooley actually practiced in Atlanta a few years before getting in the family business.

After working as a graduate assistant at Georgia and a couple of seasons at SMU, Dooley hooked up with Nick Saban in 2000 and that's when things started happening for him. He did a little of everything in Baton Rouge and even made the ill-fated trip with Will Muschamp to Miami after Saban was named coach of the Dolphins.

When Louisiana Tech went looking for a replacement to Jack Bicknell, Dooley had the family lineage and coaching pedigree to land a Division I job. This season is a pivotal one for the young coach. He enters the year with a 13-12 record in two seasons at Ruston.

Auburn's opener will be no glorified walk through. Dooley welcomes back 16 starters in his third season and Gene Chizik will likely face an opening day opponent similar to Tommy Tuberville's back in 1999, when the first year coach had to scratch and claw for a 22-15 win over Appalachian State.

Keep an eye on Derek Dooley. Something tells me he may end up in the SEC sooner rather than later. He has a reputation for being all business - much like his father. He works his team as hard as anyone in the country and it's unlikely they'll beat themselves. There will be plenty of subplots on September 5th. Let's hope Auburn's ready.