Share All sharing options for: Give Me One More Last Chance Before I Say We're Not Through 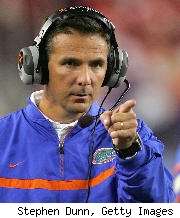 Some more brouhaha out of Gainesville,  Pat Dooley of the Gainesville Sun has written a column about the ongoing rumors of Urban Meyer's impending departure from the Gators, amidst all the speculation that he'd be starting his dream job up in South Bend next fall. With apologies to Vince Gill, let's give the Urban Legend one more last chance before he says he's not through. It all started with a Paul Finebaum column last week where FineBama accuses Meyer of a whole host of things:

But Dooley, known to be a confidant of many a Gator coach, witnessed Meyer make these remarks during a golf tournament for charity, right after he asked permission to address the subject:  "I'm not going to Notre Dame. Ever. I'm going to be the coach at Florida for a long time, as long as they want me."

There was little doubt that the remarks came abruptly, in response to the preceding Finebaum column. Ostensibly, Meyer would have to make the remarks to keep recruiting from being affected, but thus far, the Gators seem to have no problem in that department with 15 commits already for next year. Meyer then ordered Dooley and three other writers to print the remarks. I say 'ordered' rather than requested because none of them wanted to have to start paying for their own tickets to Florida Field.

We're all familiar with the term plausible deniability, and we all know that in order to keep up appearances and their own personal stock, coaches must deflect too much attention when it concerns whether or not they're leaving for another job. I don't even know why we ask them, honestly.