Share All sharing options for: Auburn Gets Little Respect From League Coaches 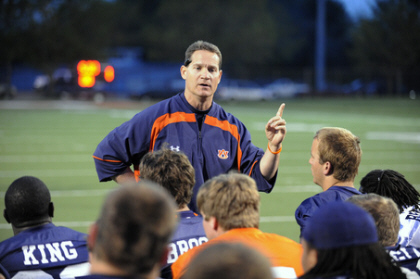 Chizik's first team is getting little respect around the South.

By my count, we are officially seven weeks from kickoff with Louisiana Tech. A sure sign the season is here is the annual SEC Media Days in Birmingham. It starts on Wednesday and concludes with Auburn coaches and players talking with the media on Friday.

In preparation for next week, the SEC released its All-Conference teams yesterday as voted on by the coaches. As expected, there wasn't a lot of love given to Auburn. Considering all the attention they got last year, maybe it's a good sign the league coaches don't think a lot of Gene Chizik's first team.

Nine of the 12 conference teams were represented on the first team.  Only Auburn, Vanderbilt and Miss State missed out. Anytime you're mentioned with these two, you know the outlook is bleak.

The most decorated Tiger is defensive end Antonio Coleman who was picked to the second team. That's surprising considering Coleman has made more than one second-team All-American team in the various preseason publications. Offensive lineman Lee Ziemba also made the second team. Running back Ben Tate, who will be in a struggle to stay with the first unit, was picked third team by the coaches.

How's this for expectations? Florida placed 16 players on the three teams including eight on the first team. Has there been a more consensus number one team in college football in the last 25 years? It all points to a big letdown in Gainesville. Here's a link to the SEC website showing all of the selections.

Joining Coach Chizik in Birmingham will be tight-end Tommy Trott and Coleman. Each will take questions from the media.  Below is the lineup...