It Looks To Be Average At Best For Auburn In 2009

Share All sharing options for: It Looks To Be Average At Best For Auburn In 2009 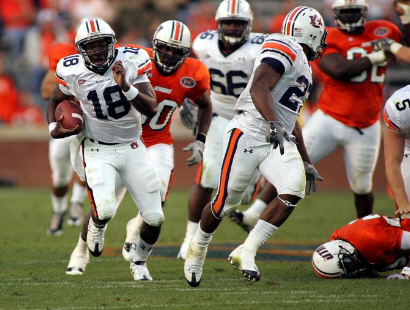 Will Kodi Burns be the one to lead Auburn this season?

By now I'm sure many of you have read every preseason publication for sale at Books-A-Million. As we've talked before, rarely are these magazines accurate in predicting how the season will play out. Yet as I sit in my home office and look on the floor, I count seven of them at my feet.

I've been hooked on Athlon's Southeastern since the mid-1970's when my father gave me my first copy. Before the internet, it was one of the year's highlights. The sight of those first guides on magazine stands meant football season was close.

In recent years, with the growing popularity of web sites, much of the luster has been taken off this annual ritual.  But even in a down economy, by my count I have rung up sales north of $50 for information that's readily available for free on the internet.  Call me old school or stupid - or both.

Many years the outlook for Auburn is all over the board - some publications have the Tigers high, some in the middle and a few take the half empty approach. This year there's consensus. Nobody expects much from Gene Chizik. The most optimistic have Auburn going .500 and unfortunately that's about where I see it.

The good news is I'm terrible in the prediction department. But like always, I'll again give it the ole college try. Without further ado, here's my quick take on the 2009 Auburn Football season...

Louisiana Tech (Sept. 8) - Like we talked last week, look for Derek Dooley to bring his Bulldogs to Jordan-Hare Stadium and give Gus Malzahn's offense everything it can handle. In the end, talent and emotion carry the day. Auburn 24-14

Miss State (Sept. 12) - It's safe to say that more than five points will be scored in this year's contest. New Bulldog coach Dan Mullen will find it's hard to run Florida's offense without Tim Tebow and Percy Harvin. Auburn 31-17

West Virginia (Sept. 19) - This game goes a long way in determining Auburn's bowl chances. The Mountaineers return five on offense and seven on defense. Auburn must again contend with running back Noel Devine. This is a very winnable game for the Tigers. Auburn 27-24

At Tennessee (Oct. 3) - This is another one of those toss up games. The trip to Knoxville has the potential for success with both teams evenly matched talent wise. However, this early in the season you have to go with Volunteer defensive coordinator Monte Kiffin over Malzahn's offense. Tennessee 21-17

At Arkansas (Oct. 10) - With a more experience receiving corp and senior running back Michael Smith back and healthy, it's likely going to be a rough trip to Fayetteville. To make matters worse, Bobby Petrino returns 10 starters on defense. Look for the Hogs to beat Auburn at home for the first time since 2001. Arkansas 35-17

Kentucky (Oct. 17) - This is not your daddy's Kentucky that visits Auburn in mid-October. Under Rich Brooks the Wildcats have won three consecutive bowl games and are capable of beating anyone on any given Saturday. This contest will likely be closer than expected; but look for Auburn to notch its 16 consecutive win over Kentucky. Auburn 28-24

At LSU (Oct. 24) - The Auburn-LSU series has become one of the most exciting rivalries in all of college football. Look for the excitement to take a year off. LSU 35-14

Ole Miss (Oct. 31) - This game has SCARE written all over it for the Rebels. If you are Houston Nutt you have to be worried about a potential Halloween disaster. The favorite to win the SEC West should have its hands full for three quarters before pulling away. Ole Miss 35-24

Furman (Nov. 7) - The Tigers likely grab their last win of the season in a snooze fest. This is the game to bring the whole family. Everyone will have room to spread out. Auburn 42-14

At Georgia (Nov. 14) - It's likely that Georgia's Mark Richt will be feeling some pressure after big losses to Oklahoma State, LSU and Florida. As always this is a big game for both teams -even if there are no conference ramifications. In the end, look for the Dawgs to collect their fourth straight over Auburn. One of the friendliest rivalries in college football begins to turn decidedly ugly. Georgia 28-17

Alabama (Nov. 27) - Auburn limps in to the Friday edition of the Iron Bowl and the results are not pretty. Nick Saban and crew prove to be too much for Chizik's first Auburn team. Alabama 34-17

By my calculations that leaves Auburn at 6-6 for the year and eligible for bowl play. Sure it's likely to be Shreveport or Birmingham, but at least it's a trip. As you can see, there are several big games that will go a long way in determining whether this year is a winner or not.