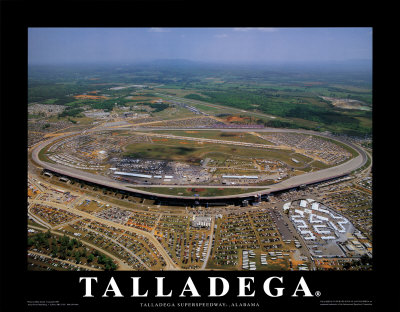 BothJay and Acid Reign have both made their predictions for the coming season. There's no way I'm walking out on that plank. My prognostication skills are limited to 4am phone calls to Miss Cleo and to the odd tabloid story prediction about Lindsay Lohan. Suffice it to say that I'm cautiously optimistic, but know that we have a lot of holes to fill. That being said, there's a lot more going on in our sport as the season countdown begins to near.

Kevin over at Fanblogs nails it with a fantasy list of neutral-site games in a host of different exotic locales. Witness:

Can you imagine 165,000 at Talladega for an Iron Bowl? What if they could do that every 5th year or so? Who wouldn't relish the thought of slamming the Tide into the wall in turn 3 the 3rd quarter? Do you think Eli Gold might get a little confused during the broadcast? Yea, I think he would, too.

Looks like Auburn will pick up previous FSU recruit Aubrey Phillips, who recently lashed out at Seminole line coach Rick Trickett (no relation to Dick Trickle, but try saying it three times fast) and the entire program. The 3-star prospect from Olive Branch, MS had originally selected Florida State over Auburn in a close call, but now calls that decision "a grave mistake" and leaves a few choice words for his former position coach. There's a chance that the 6'4" 345 lb Phillips may get to play for us this fall if a special waiver is granted in respect to the recent sanctions brought down on the Seminole Program recently for infractions.

And from the news of the unbelievable, there is now footage on the internet that was secretly taken of ESPN sideline reporter and Gator grad Erin Andrews naked in her hotel room.  Although out for a few days, the story has picked up credence since ESPN's lawyers have sent notice out to quash anyone caught disseminating the footage and promising prosecution to the anonymous (for now) peephole photographer who performed the dastardly deed. I've seen it, and although grainy, there is no doubt that it is her. Before you make comments, just think about how you would feel if film of your wife, daughter or girlfriend got out.