Share All sharing options for: Rose Bowl to Open Up to Non-BCS Teams in 2010 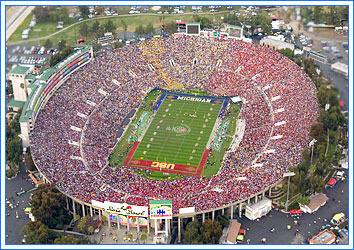 According to ESPN, the Rose Bowl is set to open itself up to non-BCS teams for a run of three years, starting in 2010, assuming that the traditional qualifying teams from the PAC 10 and Big 10(11) get picked up for a BCS national championship title game. Here's the really strange part: the open slot MUST go to a non-BCS team and not to another perhaps more-qualified BCS team that has earned it's way into a BCS bowl game. In what appears to be CFB's version of bowl affirmative action, the Rose Bowl will give a shot to any deserving mid-major for this three year trial period. No mention yet if they may consider extending this charitable program, but similar to the Bush tax cuts, it'll probably be allowed to expire on it's own.

My question is this: in a time when the Rose Bowl has become virtually irrelevant in the national championship picture for decades as a result of being handcuffed to two waning and archaic conferences, why is it only opening up it's doors to the outsiders looking in? The other BCS bowls are open to the mid-majors, and Utah, Boise State and Hawaii have been given seats at the adults table the last decade, but why does the Rose Bowl risk a continued slide into mediocrity? Why not open it's doors to ANY qualified and attractive candidate? Other than BCS NC games played in Pasadena, the only time the Granddaddy of them allhas invited an outsider in the BCS era was after the 2004 season, when Texas played Michigan (and USC was playing Oklahoma instead of us in the Orange for all the marbles). The last time any southern teams played there was in 1945 when Tennessee lost to USC and 1946, when Alabama beat USC.

Sure, LSU came close to lobbying themselves in three years ago, but why not aim to get the most attractive teams that you can? Us that clout! Which teams among the rest of the BCS conferences wouldn't send all their fans to a game there? Be certain that I'm not suggesting making every BCS bowl to drop their long-standing affiliations, or am I? Would the major bowls be better off if they took turns each year getting to select the best teams available at the time (notwithstanding the BCS title game) or do you allow them to keep their tradition tie-ins (if they so choose). It's a question worth asking until we finally get the seeds of a playoff in the FBS.