Share All sharing options for: Spooky Rebels in Auburn: Trick, or Treat? 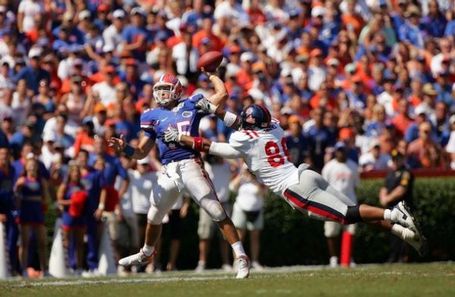 Will Greg Hardy actually play, against Auburn, this year?

War Eagle, everybody! Time now for another Auburn football preview. On Halloween night, 2009, Auburn will host the Ole Miss Rebels in Jordan Hare Stadium. Auburn will be trying to recuperate from a physical battle in Baton Rouge, and Ole Miss will arrive after taking on the Arkansas Razorbacks in Oxford. In his second year, Ole Miss coach Houston Nutt has a chance to win the West. It's a talented team, and there shouldn't be the learning curve of a year ago. The Ole Miss schedule is intriguing. Ole Miss opens with Memphis on the Sunday before Labor Day, then takes its bye week following that. After a home tuneup against Southeastern Louisiana, it's South Carolina and Vanderbilt on the road, and Alabama, UAB, and Arkansas at home. Every game on that schedule is winnable, and Ole Miss might be 7-0 on Halloween.

Much to everyone's surprise last season, Houston Nutt did not turn Kent Austin's offense into the power-I. Jevan Snead is the top returning passer in the SEC, this season. By all accounts, Snead has made major strides, and the inconsistent arm we saw early last season is a thing of the past. Ole Miss returns lots of talent at the receiver positions, including breakaway threat Dexter McCluster, who will start at flanker, this year. The Rebels return 3 talented tailbacks, including senior Cordera Eason, sophomore Brandon Bolden, and sophomore Enrique Davis. The hope is that the senior, McCluster, will carry the football less, and being less banged up, will flourish as a receiver. Where the Rebel offense may suffer is on the offensive line. Bulwark Michael Oher is gone, and the Rebels must rebuild the interior line as well.

The 2008 Ole Miss defense was fine against the run, but had trouble with passing teams. Auburn last year rang up 319 passing yards on the Rebs. This season, the Rebels lose their rock in the middle, Peria Jerry. All-World defensive end Greg Hardy might be a major player in the SEC this year, but he's had off-season woes. Hardy missed spring drills, and re-aggravated a foot injury in an automobile crash a few weeks ago. Three seniors return in the secondary, and the hope is that with experience, play will be more consistent. Auburn and Ole Miss essentially traded defensive line coaches during the off-season, and this will be Terry Price's opportunity to coach a whole line, after coaching the ends at Auburn. While Jerry will be missed, junior Ted Laurent is plenty tough in the middle, and by all accounts, uber-recruit Jerrell Powe is finally in football shape. Veteran ends return besides Hardy, and there appears to be some depth up front. The leading linebacker tackler, Ashlee Palmer, is gone, but the Rebels have options. Former Auburn Tiger Patrick Trahan is poised for a big senior season, and junior Jonathan Cornell is a player.

Ole Miss special teams took a hit when the speedy Mike Wallace headed to the NFL, but there should be plenty of burners to replace him, starting with Brandon Bolden. Rob Park departs as the punter, and the job appears to have gone to senior Justin Sparks. Senior Marshay Green will return punts again, and he is dangerous. Ole Miss had solid coverage a year ago, and figures to again.

Auburn defensive line vs. Ole Miss offensive line: The Auburn D-line had some success against the Rebels early, last season, picking up 3 sacks. In the second half, they wore down against the big Ole Miss line. This season, Auburn may have a bit more depth than a year ago, if they stay healthy, and get some help from talented newcomers. Ole Miss is set to field a line that averages 315 pounds per man. Senior right tackle John Jerry is a 350-pound bell-cow. On the left side, sophomore Bradley Sowell was slated to start at tackle, but was replaced by senior guard Reid Neely, due to ankle trouble this spring. If Neely stays at tackle, the Rebels will be young inside. Advantage: Even.

Auburn linebackers vs. Ole Miss runners: Auburn's linebacking situation scares me to death, with only Craig Stevens and Josh Bynes returning with any significant experience. Ole Miss has a trio of runners, and sophomore late-2008 star Brandon Bolden has wrestled the starting job away from senior Cordera Eason. The Rebels will use a fullback a lot of the time, and 240-pound senior Andy Hartman is a knock-down blocker. Advantage: Ole Miss.

Auburn corners vs. Ole Miss receivers: Auburn's corners held Ole Miss to 140 receiving yards last season, but a lot of that was due to poor throws. Walter McFadden and Neiko Thorpe showed good ability to stay with the speedy Reb receivers, and did not allow a catch over 20 yards. The Rebels will go with seniors Shay Hodge at split end, and Dexter McCluster at flanker. There is depth behind the starters, including senior Jacarious Lucas, who missed all of last season with academic problems. Advantage: Even.

Auburn safeties vs. Ole Miss secondary receivers and quarterback: Zach Etheridge and Mike McNeil should be healthy by Halloween, and have plenty of experience and talent. Ole Miss will use a variety of wide receivers inside. Senior Jerald Harris returns at tight end, but there are two redshirt freshmen penciled in behind him. Harris only caught 7 balls, a year ago, but 4 of those were short, red-zone touchdowns. Ole Miss did not throw much to backs; none had more than 10 catches. Jevan Snead had one of his worst games last year, against Auburn, frequently sailing balls to the bench, or into the dirt. I expect that we won't see that, this year. Advantage: Even.

Punting: Clinton Durst averaged 42.1 yards per punt for Auburn last year, in his first season. Ole Miss will go with senior Justin Sparks, who averaged 39 yards per punt, several years ago. Another punting option is junior Bryan Powers, a junior college transfer. Powers averaged only 38.5 yards per punt in junior college, but had a knack for downing balls inside the 20. Marshay Green averaged a good 10.9 yards per return for the Rebels. Auburn is unsettled as to who will return punts, and does not have a player who has fielded a college punt. Auburn gave up 7.0 yards per return, Ole Miss gave up only 5.9. Advantage: Auburn, on Durst, last season's MVP. (or should have been!)

Kickoffs: Auburn's Wes Byrum averaged about 67 yards per kickoff during the spring, and appeared very consistent during the A-Day game. Ole Miss has senior Justin Sparks, who averaged 63.5 yards per kick, with 10 touchbacks, which is unusual in this era of kicking off from the 30! Ole Miss will line up Brandon Bolden and Marshay Green as return men. Bolden averaged only 15 yards on limited returns last year, but that number is likely to go up. Auburn junior Mario Fannin is the most experienced kick return man, averaging 22.5 yards per return. Auburn's coverage unit gave up 21.5 yards per return, Ole Miss gave up 20.2. Advantage: Even.

Placekicking: Wes Byrum returns for his third year for Auburn, having hit 27 of his 42 career attempts. Ole Miss goes with veteran senior Joshua Shene, who hit 17 of 21 last year. Shene has hit 42 of his 55 career attempts. Advantage: Ole Miss.

Auburn offensive line vs. Ole Miss defensive line: Auburn's offensive line handled the Ole Miss line pretty well, last fall. Unfortunately they were trying to block 8 or 9 guys, so the running game went nowhere. And it was a banged up Ole Miss line. Auburn has bulked up this year, but has little depth. Ole Miss returns veterans up front. Senior Ted Laurent anchors the middle, along with junior Lawron Scott., and the pair should get help from junior Jerald Powe. Senior Greg Hardy is an all-star at end, IF he plays. Senior Marcus Tillman and junior Kentrell Lockett are pretty good ends, too. Advantage: Even.

Auburn backs vs. Ole Miss linebackers: Auburn has some dangerous options, including senior Ben Tate, junior Mario Fannin, and sophomore Eric Smith. Lead blocking, with Fannin, and sophomore John Douglas, is a question mark. Misdirection and good ball fakes should help the Auburn backs. Junior middle linebacker Jonathan Cornell had 45 tackles a year ago, and takes over the middle of the defense. He'll have senior Patrick Trahan on the weak side. Trahan was once a starter for Auburn. The Ole Miss linebackers aren't big, but they can run, and swarm to the ball. Advantage: Auburn.

Auburn receivers vs. Ole Miss corners: Auburn will field mostly young players this fall, although Montez Billings brings experience, if he qualifies academically. Expect Auburn's route running and catching to be much improved, under the tutelage of Trooper Taylor, this year. Ole Miss corners got routinely picked on, last year, but improved all year. Seniors Cassius Vaughn and Marshay Green figure to be pretty respectable, this year. The Houston Nutt/Tyrone Nix style of defense leaves the corners on an island a lot, so it's important for Auburn receivers to be able to make plays on the outside. Advantage: Even.

Auburn secondary receivers and quarterback vs. Ole Miss safeties: Senior tight end Tommy Trott should be solid, and junior Mario Fannin showed flashes in the slot, but quarterback play for Auburn is still a question. Ole Miss loses strong safety Jamarca Sanford, who camped out in the Auburn backfield last year, and had several tackles for losses. Replacing him will be junior Johnny Brown. Senior Kendrick Lewis is the free safety. Houston Nutt has heaped praise on his safeties. Advantage: Ole Miss.

Despite all the preseason hype given to Ole Miss, and media disdain for Auburn, these are two fairly evenly matched teams in the trenches. Auburn matches up a lot better, size-wise, this year, and should not wear down as much as they did a year ago. The Rebel youth on the offensive line could turn out to be a huge liability, especially if the Auburn linebackers are up to stopping the talented Ole Miss backs. On offense, Auburn must make plays on the edges, whether it be passes, sprint options, or especially downfield throws. It's never been prudent to run right at a Houston Nutt team, and this year will be no exception. While Ole Miss appears on paper to have significant advantages, the game is at Auburn, and Auburn will be looking for a good showing after a tough trip to Baton Rouge.

Prediction: Ole Miss cannot solve the hobgoblin of Auburn's Malzhan offense. Both teams move the ball well, but mistakes on the road doom the Rebels. Auburn hangs on, 34-27.