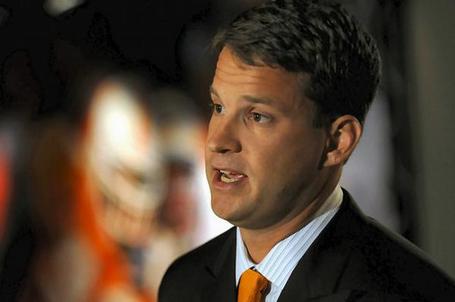 In the news of the surreal last week, the Atlanta Journal-Constitution reported that the 13 year old brother of Tennessee safety/hitman Eric Berry has 'committed' to Tennessee, telling Rivals.com that he intends to become a Vol one day. For obvious reasons, a school can't offer a schollie to a player until he's a junior in high school, but this didn't stop the 8th grade Evan Berry from being the first one in line for the class of 2014.

Immediately, Scout.com declared him a half-star prospect, which coincidently, is the same rating my last hotel in Paris brought. No word yet if the younger Berry's declaration was emailed, text-messaged, or written in a Blue Horse tablet. Also unclear is whether or not Lane Kiffin ripped off his own underoos in order to influence the decision.

Both Evan and his twin brother Elliott come from a strong football pedigree. Their father, James, played running back for the Vols under Johnny Majors in the late 1970s and their older brother Eric is currently an All-American standout at safety .

Although this may have been a spontaneous incident that grew legs, is anyone else concerned at all about the type of attention this is garnishing? They start scouting basketball players around this age, so is this what we can come to expect in football now? Certainly no one could deny the allure of the kid's father's and brother's alma mater, but does it have to become a national story?