Friday Iron Bowl on the Plains!

Share All sharing options for: Friday Iron Bowl on the Plains! 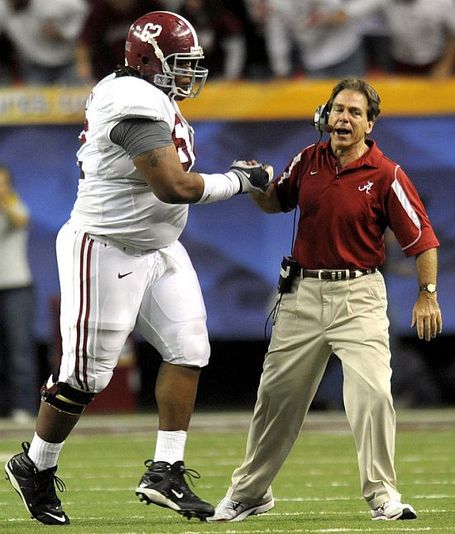 Can the Tigers move a mountain?

War Eagle, everybody! Time now for an early Iron Bowl preview. This year, Alabama will visit Auburn at Jordan Hare Stadium, on Friday, November 27th, 2009, the day after Thanksgiving. This will be the sixth Iron Bowl played on a Friday. Auburn has won three of the previous five, most recently in 1988. While Auburn will have had a Saturday off the previous week, Alabama will be coming off a tune-up match against Tennessee-Chattanooga. The Tide likely will enter this contest as a top ten team, in contention for the SEC Western Division Title. Barring poor injury luck, Auburn should be around 7-4 on the year, and jockeying for bowl position.

The 2009 edition of the Alabama defense should loaded. The Tide returns 9 starters on a team that finished 3rd nationally in total defense. The stars are senior nose guard Terrence Cody and junior linebacker Rolando McClain. It's possible that both of those players will be selected in the first round of the next NFL draft. Six of the front seven return. The only serious loss for the Tide defense is All American free safety Rashad Johnson. The Tide is fairly young behind the starters in most cases, but it's a pool of players drawn from some great recruiting classes. If there is a weak spot, at all, it might be with a new free safety. Even so, the best strategy for attacking the Bama D remains the same: work the sidelines, and make 'em run.

Bama has some question marks on offense, having lost 7 starters from a year ago, including veteran quarterback John Parker Wilson, top rusher Glen Coffee, and 3 NFL-caliber offensive linemen. Junior quarterback Greg McElroy appears to be the pick to run the offense, and sophomore runner Mark Ingram is striving to become an every down back. The star of the returnees is sophomore wide receiver Julio Jones, who was a freshman All-American last season. Senior offensive linemen Drew Davis and Mike Johnson also return.

Bama is in a rare position on special teams. Nearly everyone is back, from a pretty good unit. Senior Leigh Tiffin handles the kicking, and senior P J Fitzgerald punts. Alabama has one of the best return men in the nation, in senior cornerback Javier Arenas. If there's a special teams area where Bama is not exceptional, it's coverage. Bama's kickoff coverage was average, and punt coverage was suspect, in 2008. With a bit more veteran group this year, look for coach Bobby Williams' guys to show improvement.

Matchups (It's a not an official Bama depth chart, ai'ght?)

Auburn defensive line vs. Alabama offensive line: In last year's Iron Bowl, from the second Bama drive onwards, they took it right at the strong side of Auburn's line, against SenDerrick Marks and Michael Goggans. The result was a 234 yard rushing day, and 4.7 yards per carry. The Auburn line made a few tackles, and held their own, but it was not enough. This season, Auburn will have similar strength on the line. Bama usually runs between the tackles, with up to 9 blockers on the play. It won't be enough for Auburn's line to simply play to a draw. The Auburn line must get penetration and disrupt. Alabama returns senior guard Mike Johnson, and senior right tackle Drew Davis. Beyond those two, it's safe to say that the starting jobs aren't nailed down, at this time. Junior William Vlachos is the most likely to start at center. Bama has a plethora of large young linemen to choose from, to fill out the other two spots, perhaps none as impressive as 350 pound true freshman D. J. Fluker. Advantage: Auburn.

Auburn linebackers vs. Alabama runners: Erratic linebacker play was the order of the day for Auburn, in last year's Iron Bowl. This year's situation may be even worse. Juniors Josh Bynes and Craig Stevens are the only significant experience that returns for Auburn at linebacker. This fall so far, Auburn cannot keep a weak side linebacker healthy. As of this writing, true freshman Jonathan Evans is running with the starters, because there's no other scholarship linebackers able to practice. Bama remains pretty well loaded at running back. Sophomore Mark Ingram is the heir-apparent, after tallying 743 rushing yards last season as a true freshman. Behind Ingram is junior Terry Grant, who has great speed. Incoming freshman Trent Richardson is highly regarded, and might be used as Ingram was, a year ago. Advantage: Alabama.

Auburn corners vs. Alabama receivers: Auburn's starting corners Walter McFadden and Neiko Thorpe should be very solid this fall. Both have continued to win praise in fall camp. As elsewhere with the Tigers, depth is a problem, as converted receiver Harry Adams is currently the 3rd corner. Bama sophomore Julio Jones is the most talked about, but he's hardly the only good wideout Bama has. Senior Mike McCoy will start opposite Jones, and off the bench the Tide has sophomore burner Marquis Maze, and sophomore Darius Hanks. Slight Advantage: Alabama.

Auburn safeties vs. Alabama secondary receivers and quarterback: On paper, this seems a very favorable matchup for Auburn. The Tigers return two veteran safeties. However, health remains an issue in fall camp. Junior Zach Etheridge is back at strong safety, playing well. But free safety Michael McNeil is still rehabbing a broken leg. Whether McNeil will be full-speed by Iron Bowl time is not clear. Auburn has several options, including Mike Slade, Drew Cole, and incoming true freshman Darren Bates, who is turning heads in fall camp. Alabama has to replace their 2008 starters in this category. Gone are tight ends Nick Walker and Travis McCall, as well as quarterback John Parker Wilson. Bama's best option at tight end appears to be senior Colin Peek, a Georgia Tech transfer. Peek is a tall, strong target with good hands. Others vying for playing time include sophomore Brad Smelley, junior Preston Dial, and sophomore Chris Underwood. Junior Greg McElroy takes the helm at quarterback, and by all accounts, is doing well. None of Bama's other quarterbacks were terribly impressive in the A-Day game, and the Tide may look to incoming freshman A. J. McCarron as the backup quarterback. Advantage: Even.

Punting: Clinton Durst averaged 42.1 yards per punt for Auburn last year, in his first season, with 18 of 70 punts pinned inside the 20 yard line, against 4 touchbacks. Bama returns senior P. J. Fitzgerald, who averaged 41.1 yards per punt, with 15 pinned inside the 20 on 59 punts, and 4 touchbacks. Auburn's punt coverage gave up 7.0 yards per return, the Tide gave up 9.0. While Auburn is still trying to find a punt returner, Bama returns Javier Arenas. Arenas averaged 15.9 yards per return, with 3 touchdowns. Arenas has 6 career punt return touchdowns. Advantage: Alabama.

Placekicking: Wes Byrum returns for his third year for Auburn, having hit 27 of his 42 career attempts. Byrum had something a sophomore slump last season, hitting only 11 of 19. All indications are that Byrum is kicking it much better, this year. Bama senior Leigh Tiffin handles the kicking for the Tide, and he's had his ups and downs, too, none as painful as a series of missed kicks in a one point loss to Arkansas in 2006. Last season, Tiffin was 20 out of 29, and for his career, he's 53-76. That's 64 percent for Byrum, 69 percent for Tiffin, overall. Advantage: Alabama.

Auburn offensive line vs. Alabama defensive line: Auburn will field a strong group of offensive line starters, but current word is that we have not even one backup that can play at an SEC level. Last season, this group managed the unlikely feat of playing to a draw against the Bama front. Unfortunately, that took all five linemen to deal with 3 guys, and left the rest of the Bama back seven running free. Senior All-American nose guard Terrence Cody returns for the Tide, and word is that he's dropped some weight, and is more mobile and dangerous than ever. Senior end Brandon Deaderick provides stability with 22 career starts going into the season. Senior Lorenzo Washington will likely start at the other end slot, but he's also an experienced nose guard, and can relieve Cody if the big man gets tired. Beyond that, Bama has about a half dozen more guys that can play at an SEC level. Advantage: Alabama.

Auburn backs vs. Alabama linebackers: Auburn's backs look to be more dangerous, this season, with Mario Fannin moved to H-back, and the emergence of newcomers like Onterrio McCaleb and Eric Smith, behind Ben Tate. Still, against hordes of unblocked linebackers, no one can succeed. Auburn MUST be able to block better, this season, from the skill positions! An impressive Bama linebacking corps is led by junior All-SEC behemoth Rolando McClain. McClain is defensive-end sized, at 260 pounds, but runs like a safety. Sophomore Dont'a Hightower is another big, 250 pound Bama backer, who is equally at home covering backs out of the backfield, or setting up with a hand down and rushing the passer. Joining McClain and Hightower will be senior Cory Reamer, and senior Eryk Andrews. There is some depth behind the big 4, but not as much as in other Tide areas. Advantage: Alabama.

Auburn receivers vs. Alabama corners: Auburn will be mostly inexperienced at wide receiver, returning only senior Montez Billings with any significant past production. Spring leader Tim Hawthorne is still injured. Wide receivers coach Trooper Taylor is talking about all 4 true freshman receivers playing. This is perhaps the most critical matchup of the game, as it's nearly impossible to move the ball on Alabama, without exploiting the sideline. For Alabama, it's an experienced group of corners. Between senior Javier Arenas and junior Kareem Jackson, there are 41 career starts, before this season begins. These two are fast, and stick to receivers like glue. If there's a weakness, it might be that Arenas is only 5' 9". When the situation calls for a nickel defense, the Tide can call on senior Marquis Johnson, who's been solid for several years. Advantage: Alabama.

Auburn secondary receivers and quarterback vs. Alabama safeties: The news out of Auburn is that a starting quarterback has finally been settled on, and that man is 5th year senior Chris Todd. There still are questions about Todd's arm strength, and durability, but not about the man's persistence. Written off and left for dead last October, Todd won the starting job in 11 days of fall camp, over incumbents Kodi Burns and Neil Caudle. Auburn should have some options at the inside receiver positions, with 5th year senior tight end Tommy Trott, and junior Mario Fannin in the slot. Last season, Trott missed the Iron Bowl due to injury, and Fannin was playing tailback against stacked Bama fronts. These two MUST have a great game, especially blocking, for the Auburn offense to have a chance. Bama returns senior safety Justin Woodall, who was a surprise last season. Besides having good hitting skills, Woodall had 4 interceptions and 8 passes broken up. Not bad at all, for a strong safety! Penciled in to start opposite Woodall is sophomore Robby Green, a converted cornerback. With Green, Bama has 4 or 5 good sets of hands in the secondary. Advantage: Alabama.

Auburn must find a way to move the ball effectively against Alabama, or another blow-out loss is likely. It's going to take a great, mistake-free effort. The Tigers MUST use the whole field, and spread Alabama out. First time Iron Bowl starters at quarterback generally have a rough go of it, and it's really important for the Auburn defense, and the home crowd, to make Greg McElroy's first such start miserable.

Prediction: A transition year, and a lack of depth hurt Auburn in the 12th game of the season. Auburn gives Alabama more of a battle than a year ago, but the Tigers fall: 27-17.