Share All sharing options for: New Feature For This Fall--Secondary Ticket Market Tracker 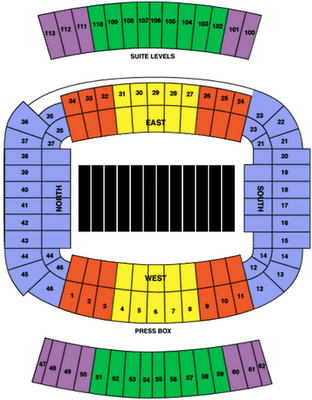 Auburn fans fall into three categories: those who watch the games on TV, those who go to some games and those who go to all of them. If you fall into the two latter slots, getting tickets and what you pay is of prime importance. Some people get their season tickets automatically, either from going through the proper ordering procedures or receiving them from family or friends. If you're not connected, or don't have the cash to get a place in line, you do like me and get your tickets through the secondary market--resales. If you're lucky, perhaps you can pick up some from friends who aren't going to a particular game. If not, you're forced to buy them on the open market, and sometimes that can seem like trying to pick up an IPO during the dot com boom--they ain't going cheap!

Back in the good old days, if you wanted to go to a game and had no line on scoring tickets, you merely showed up and risked a purchase from someone with extras or from your friendly neighborhood scalper. Say what you will about people who did this as their livliehood on gameday--they performed a necessary service, and if you're a fan of free markets, that and the hokey pokey are what it's all about. Showing up on game day without a ticket isn't for everyone, especially large groups of folks, but in 25 years, I've never been shut out of one. I've had to sneak into one and I slipped away from the cops escorting us out for having a counterfeit ticket for a Florida game in the mid 90s, but I always made it in.

The secondary market really got turned on it's ear with the advent of the internet and eBay around 2000 or so. Prior to 2001, the most I ever paid for a ticket was $60, and it was usually much less than that. Once eBay removed the 'showing up at the game ticketless and cash in hand' requirement from the equation, the market was flooded with immediate increased demand , and if you ever suffered through an economics class in Thach Hall in the late 1980s, staring out an open window in an un-air conditioned classroom during a spring quarter, you can still probably remember what happens to price when supply is short and demand goes up. For the 2001 Iron Bowl, I eschewed the high prices online and showed up for the game, where I was forced to pay $350 for a pair at the last minute for crappy seats. That AND the fact that Auburn didn't even show up for that game had me seriously questioning whether or not I would EVER attend another game in person. Seriously!

These days, eBay is still around, but has been supplanted a bit by Craigslist and other sites like Stubhub,which subject the tickets to the full fury of the open market. And you don't have to just buy single game tickets either. You can purchase full or partial season tickets, too, which you can in turn resale individual games that you don't wish to attend. It also allows you more time to figure out where the tickets are, as anyone standing in front of a scalper suffering temporary memory loss of the Jordan-Hare seating sections can attest to. I like to think I know the sections pretty well, but eight vodka tonics before kickoff can sometimes impair that particular recall process. No one wants to get stuck in the visitor's section, and if you're like me, I'd rather go watch it in a bar than in the upper deck, and even some of you still like sneaking into the student section (happily graduated from that a while back--thank God!)

So what I propose doing after each game is to put up a thread where people can list their secondary market purchases so we can track what tickets are doing this season. It doesn't have to seem like an economics assignment--I think we can glean some useful knowledge from gathering this info. What we'll be looking for is the following:

I think we can start this thread off today by hearing from those folks who have season tickets already, so we can find out what the market is doing pre-season. We'll take those who bought them on the secondary market and even those you purchased them firsthand can chime in, too, if you wish to divulge the true cost of your tickets. Many people buying secondary tickets often complain about how much over face value they have to pay, but they sometimes forget about the large donations that long-time ticket holders have to pay the university for the privilege.

Obviously, how Auburn will do this year is a big unknown, so if we have early success or failure, it be interesting to see how the market reacts with each passing week. Maybe this will be a continuing feature with active participation, or maybe it will crash and burn. I don't know if it would break any rules, but it might also be a way to perhaps link buyers and sellers together and keep it in the Auburn family. We will see!