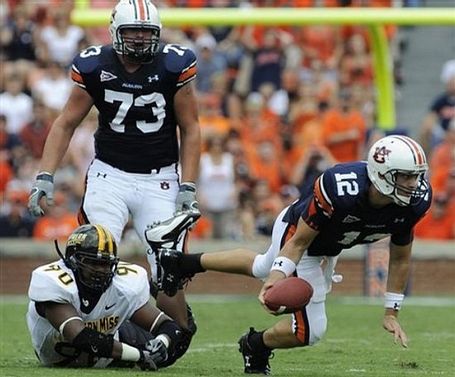 Chris Todd trips, and shovels the ball to Ben Tate for a 27-yard gain!

War Eagle, everybody! Today's post will take a look at returning SEC quarterbacks, and their chances in 2009. As usual, a few stars return, and a whole lot of guys hoping to step up. Few would argue that Tim Tebow is one of the best in the country, and it's pretty certain that big numbers will be expected of Jevan Snead and Ryan Mallett. Beyond that, it's a slate of guys that had questionable stats, limited starts, or both.

It's been argued in numerous places in the past, that if you're going to pick one stat (other than wins and losses), as an indicator of a team's success, it would be "net yards per pass." (Google that quote, if you'd like to read more on the logic.) To figure net yards per pass, take passing yards, subtract out 50 yards for each interception, and subtract sack yardage. Divide the result by the number of passing attempts. The interception penalty is a sort of a median guess as to how much field position an interception costs a team. Since interceptions and sacks kill drives, they are important.

Whether a team runs to set up the pass, or passes to set up the run, net yards per pass is an important stat. A high rating indicates a preponderance of big plays, which leads to high scores. A low rating indicates that defenses can pack it in close to the line of scrimmage, and stifle the offense. Even a predominately run-oriented team must be able to be a threat passing, to have success. The two teams that threw least in 2008, Florida and Alabama, ended up in the SEC Championship game. However, their yards per pass stats were 1st, and 4th, respectively. Let's look at the results from 2008:

Some of the teams that finished highly in yards per pass, finished with mediocre records. Why? Because they gave up high net yards per pass to their opponents. LSU and Arkansas come to mind. The team with the poorest yards per pass average, Vanderbilt, actually won a bowl game. The reason? They finished 3rd in defending net yards per pass. 20 interceptions will always help your win column!

Teams that finish at 4.0 or better tend to sustain drives and score points. Conversely, holding an opponent below 4.0 keeps them from getting first downs, and keeps them off the scoreboard. With those concepts in mind, let's take a look at the career numbers for the returning SEC starters:

Along with media favorites Tim Tebow and Jevan Snead, are some surprises: Greg McElroy and Joe Cox. The latter two haven't played as much, and one might be tempted to throw out the results because of insufficient data. I think you have to remember that the whole offensive team helps create the stat. With good talent around them, I think McElroy and Cox will do well, this year.

Where does this analysis leave Auburn? Chris Todd is currently ranked last in the West. Were Auburn in the East, Todd would rank 3rd. In the SEC overall, Todd finishes 8th. It's not all gloom and doom, though. Todd put up most of that stat with a bad throwing arm, and in a dysfunctional offense. And Todd still managed to beat out six quarterbacks on the list above! Just about every facet of the Auburn offense looks to have improved over the off-season, including a beefed up line, better receiver play, and a surgically repaired arm. While most quarterbacks improve with experience, we should see quite a jump for Todd, this year.

Another quarterback who should improve dramatically is Ryan Mallett, of Arkansas. Mallett compiled his stats as a freshman in Lloyd Carr's moribund Michigan offense. Under Bobby Petrino, Casey Dick finished 5th in the league last season. With a gun like Mallett has, the sky's the limit!

Some of the guys starting this year at quarterback will struggle. Much of that is due to new systems and suspect supporting casts. Jonathan Crompton's had to learn his 3rd college offense, and it's a fairly complicated West Coast scheme, too. Crompton's best deep threat, Gerald Jones, is out. Mississippi State is sorely lacking playmakers on the offensive side of the ball, beyond Anthony Dixon. The same could be said of Kentucky, South Carolina, and Vanderbilt.

Just think, folks! We've got one week left, just ONE WEEK, before the SEC season kicks off! I can't wait to be in front of my TV, for the Gamecocks' battle with N. C. State! It's going to be another exciting year!