Share All sharing options for: Top Games Not Involving Auburn or the SEC I'd Like to See This Year 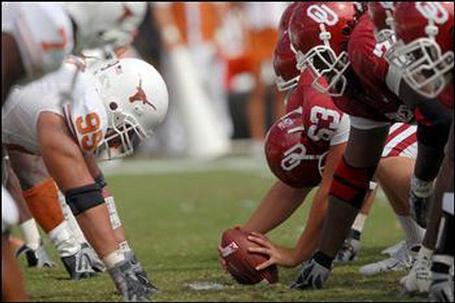 The Red River Shootout. Still good even if you're not supposed to mention guns anymore...

Face it. A few of you are true homers and don't know anything of the CFB world that exists beyond the city limits of Your College Town, USA, but many of us CAN see the collegiate forest for the trees and realize that the landscape has many quality teams and conferences with some intriguing matchups this season

Your assignment, should you choose to accept it, is to list the top five games you'd like to see that are on the schedule that DO NOT involve your team OR the SEC. It's time to think outside the box!  List the team who you think will win first.

1) Texas-Oklahoma: Should be an even bigger grudge match this year, and you'd like to say that the winner will win the Big 12, but as we know last year, that ain't necessarily the case. Probably also wouldn't be a stretch to say that the winner will play for the BCS title, but if these teams were in the Big 10(11), I'm sure you'd see a serious lobbying effort to get them a rematch in Pasadena similar to the Ohio State-Michigan rematch proposal from 2006.

2) Ohio State-Penn State: Played in Happy Valley, this game should decide the conference champion, but certainly don't rule out Iowa to possibly make a challenge from the middle of the pack. The Hawkeyes play both teams, but on the road. The loser of this game can probably look forward to a trip to Orlando for the What's In Your Wallet Bowl.

3) USC-Notre Dame: The put-up or shut-up Bowl for Charlie Weiss, who has never beaten the Trojans, and whose team is riding a seven-game losing streak to them, a record in the series. This could also be called the strength-of-schedule Bowl, as both teams start the season with SOSes ranked in the 80s. Granny Holtz picked ND to play in Pasadena this year, but they have to win this one first. The Irish have scored a whopping three points in the last two years. I predict that Charlie Weiss will soon be joining Dr. Lou on the guest speaking circuit soon enough.

4) Oregon-Boise State: In the Bronco's biggest home game EVER, will they be able to make it two in a row over the Ducks, who they beat last year in Eugene? Both teams come in ranked in the top 20 and I'm sure that the Smurf Turf will be electrified. I know it hurts your eyes looking at that hideous field, but if you wear some rose-colored sunglasses, look at the TV through an old Viewmaster and take a mild hallucinogen, it almost appears to be in 3D. This one comes this Thursday!

5) Georgia Tech-Virginia Tech: The Tekkie Convention, won barely by the Hokies in Blacksburg last year. This one will possibly be for the ACC Coastal division title, something that was supposed to just be mailed to VT at the beginning of the year, prior to star RB Darren Evans being lost for the season. On the Flats this year, I might eschew the Kentucky game if offered free tickets to this one!