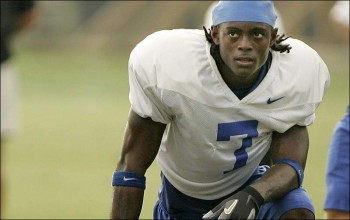 This story is for all the Rebel Fans who dropped in to say hi last week!

On Friday, Ole Miss coach Houston Nutt announced that retread safety Jamar Hornsby was being released from his scholarship and being given the boot from the Rebels' squad with the announcement that felony assault charges were being filed against the troubled Hornsby from an incident that occured in March right after he arrived on campus.  Hornsby allegedly punched a man in the face at a local McDonalds, although it's not clear if the motive was because he refused to accept his credit card. It's also rumored that Hornsby used brass knuckles, although that specific mention failed to appear in the indictment.

Hornsby, who played last year at East Mississippi Community College, was granted a scholarship in the spring by Nutt who was looking to rehabilitate the former Florida Gator who was dismissed last spring in the highly publicized incident where he used his roommate's dead girlfriend's credit cards to purchase over $3000 in gas, amongst other things. Nutt had hoped to use the talented safety this year, but obviously saw no benefit when felony charges were filed once again. In a plea agreement last year, Hornsby's charges in Gainesville had been reduced to a misdemeanor.

Hornsby is now expected to clean out his locker, withdrawl from classes, and give all his teammates a free fill-up before departing to his next destination: probably somewhere in the penal leagues.