The Ones That Got Away? Angling for the Truth in Preferential Treatment Bay

Share All sharing options for: The Ones That Got Away? Angling for the Truth in Preferential Treatment Bay 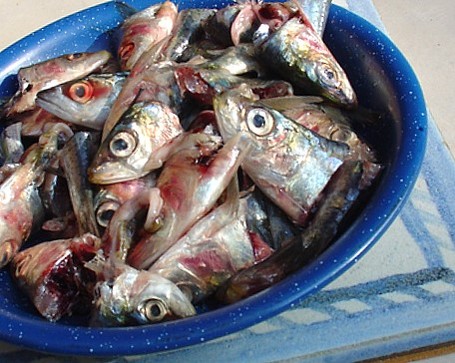 Who's heads are gonna roll this time?

This blog was stone cold silent last week as news came out of the possibility of Alabama players Julio Jones and Mark Ingram receiving extra benefits in the form of a fishing trip given by a man down on the coast earlier this year. While some think that we may relish in bad news coming out of Tuscaloosa, I think we were relatively objective when the sanctions over their textbook scandal came out in June. But not wanting to constantly be going negative against our western cousins, we've tried here at TET to focus on other things this summer, but lately, I've felt as lonely as an unemployed tabloid writer when Britney Spears decides to go on her next panty-less raid. And with the suspensions of Jones and Ingram still up in the air for the big game in the Georgia Dome this weekend, I think it's now relevant to talk about.

What do we know so far? Curtis Anderson, a 56-year old white, self-described 'good' friend of Julio's, is said to neither be an Alabama alum/booster/fan/whatever, but he does hail from Jones' neck of the woods, in Athens. And since he isn't affiliated with the school, case closed--no violation. Right? Not so fast. my friend. Am I the only one that thinks something stinks like yesterday's bait box? The university's investigation, which sought guidance from the NCAA, has now been turned over to the SEC, which will most certainly then turn it's findings over to the NCAA. You think all three of these parties should get on the AT&T Family Plan, with rollover minutes?

Here are some questions I'd like to know the answer to but seems that no one is asking:

"Just great", Nick Saban must be thinking, after after signing a new contract recently that will attempt to button him down in Tuscaloosa well into his Medicare eligibility. I say attempt, because with Saban, there is no buyout and he is free to leave at anytime, a risk that comes with handing a coach the keys to the kingdom--that he might mail them back to you one day, like a Miami condo speculator to his mortgage company. With Saban and the success that he had last year, I'd expect him to stay in place for the foreseeable future with the exception of one thing: the continuing petty bull$h*t that keeps blindsiding him and tarnishing his image, if not the university's.

Look, I don't like this constant flirtation with the NCAA that the Tide is exhibiting like what seems to be non-stop. I want them on the field--all of them. I don't want any excuses down the road if their two best players are held up for even one game. It's a distraction to the conference and the state, and it gives even more ammo to your enemies, who are accumulating it lately like Montana survivoralists on Obama reelection eve.

Alabama can't afford to use ineligible players, so expect both of them to be held out as a precaution by Saban if a decision isn't forthcoming from Indianapolis by Saturday. I expect it will be, the only question being whether on speed dial or text message.

NOTE: All comments earn bonus points if you put a fishing metaphor in the subject line!