A Trio of Hundred Yard Rushers, in ONE Game!

Share All sharing options for: A Trio of Hundred Yard Rushers, in ONE Game! 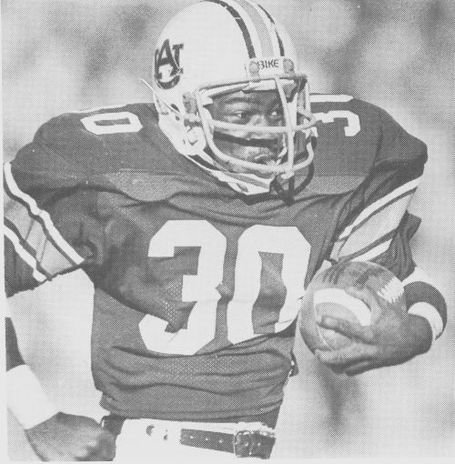 Yes folks, Auburn has done it before! Tommy Agee, pictured above, was part of that offense!

War Eagle, everybody! With the 2009 Auburn offense gobbling up record amounts of rushing yards, today's post will feature a look back in time, to another great Auburn rushing offense. In the aftermath of Auburn's convincing 49-24 win over Mississippi State, several Auburn folks on this board expressed regret that Mario Fannin wasn't kept in the game late, to give Auburn three 100-yard rushers in the game. And that brought up the question, has Auburn ever had 3 one-hundred yard rushers in one game?

Details, after the jump!

In 1983, Auburn nearly had the season derailed in the second game of the year, as Texas came into Jordan Hare stadium, and rode two long bombs to a 20-7 victor over the Tigers. After being held to 7 points in that game, the Tiger offense went on a tear, putting up AT LEAST 27 points per game, for the next 6 games. It was "Amen Corner" time, on the Plains. Last 4 regular season games on the schedule were: a dynamite Charley Pell Florida Gator team, 8-1 Maryland for homecoming, defending SEC Champ 9-0-1 Georgia in Athens, and Bama at Legion Field in Birmingham. Auburn was coming off a 28-21 shootout over Florida, going into Homecoming.

The Maryland Terrapins were a good team, and came into Auburn with only an early loss to West Virginia. Coach Bobby Ross was in his second season coaching the Terps, and had dramatically turned around a floundering program. Ross would go on to prove that he knows quite a bit about winning football games. Ross coached Georgia Tech to the 1990 national championship, and got the San Diego Chargers to the Super Bowl, in the NFL. Maryland had one of the best quarterbacks in the nation, in Boomer Esiason, and had an athletic "read and react" defense.

Early on, Maryland seemed to be keeping Auburn from breaking the big play, but the yards were piling up on 5-10 yard runs. After wasting the first quarter stalling out in Maryland territory, quarterback Randy Campbell broke the ice on the scoreboard early in the 2nd quarter with a 7 yard pass to wide receiver Chris Woods. Auburn led 7-0. Auburn fullback Tommy Agee broke through the Terp defense later in the 2nd quarter, barreling for a 61 yard touchdown. Al Del Greco added the PAT. That day, Del Greco broke the school record for career points scored, taking over the lead from Joe Cribbs, at 218 points.

Maryland tried to answer. Boomer led 'em down the field, but the Terps had to settle for a field goal. Auburn led at the half, 14-3, and it should have been worse. Auburn fans were already planning the rest of their homecoming day, as it appeared that the Auburn defense had totally shut down the Maryland offense.

Auburn was content early in the 3rd quarter, to just hand off into the line, and punt. The Terps took to the air with a vengeance. Boomer started firing, and moved the chains relentlessly. Touchdown passes to Sean Sullivan and Greg Hill put the Terps ahead, 17-14. Auburn cranked up the option, again. On an 81-yard drive, Bo Jackson plowed in from 5 yards out to regain the lead for Auburn, 21-17. Auburn stopped the Terps near midfield, and started with the ball again, at their own 16. It was Agee again breaking loose up the middle, hammering the Terps for a 44-yard score. Auburn seemed comfortably in front again, 28-17, more than halfway through the 4th quarter.

Esiason was not done yet, though. With 4:32 left in the game, Boomer connected with Russell Davis on a 40-yard bomb, and the Terps were within 28-23. On the quarterback draw, Esiason came up just inches short of the goal line, on the two point conversion. Auburn took over after the kickoff, and quickly was facing a 4th and 1 at the 31. Everyone in the stadium knew that the ultra-conservative Pat Dye would punt the football, but instead, here came the offense back out! The play call was predictable, but it didn't matter. Bo Jackson went over the top, for 3 yards and a crucial first down. Auburn chewed more clock, finally facing 4th down at the Auburn 49 with under a minute left. Lewis Colbert came in, and hammered a ball that was downed at the Maryland 1 yard line.

The Terps had used all of their timeouts, and had the ball at the one, with 38 seconds left in the game. Esiason quickly rifled an out for a first down at the 14. An incompletion stopped the clock again. Then, with just a 4-man rush, Auburn brought the heat. Quency Williams blindsided Esiason at a dead run, and the ball popped out and rolled into the end zone! Tackle Donnie Humprey chased it down, and fell on it for an Auburn touchdown! The Tigers had escaped, 35-23. Boomer Esiason had hit 12 of 17 passes in the 2nd half, for 289 yards, and 3 touchdowns, and Boomer had set a school record for passing yards, with 355 for the game.

The real story in this game, though, was the Auburn running backs. With most of it coming in long, ball-control drives, the Tigers had posted 450 rushing yards on the day, and 517 total yards. Fullback Tommy Agee finished with 24 carries for 219 yards, halfback Lionel James had 14 carries for 115 yards, and Bo Jackson had 18 carries for 105. The Auburn Tigers would go on to win the 1983 SEC Championship with a 6-0 league mark, 10-1 in the regular season. In the Sugar Bowl, the Tigers would edge Michigan 9-7, on a late Al Del Greco field goal, to finish 3rd in the nation in the AP poll, number one in the New York Times computer rankings.