Share All sharing options for: West Virginia: The Worst Fans In College Football? 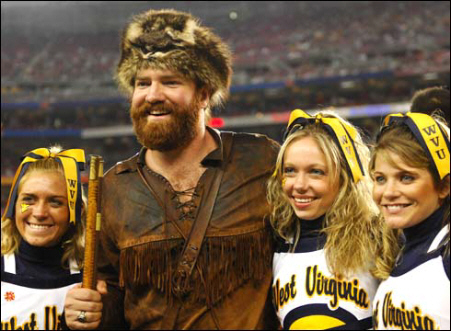 The worst fans or just misunderstood?

Let's face it. The state of West Virginia doesn't have the best reputation in the world. There's been enough mountaineer jokes through the years to fill Jay Leno's monologue coffers for the next 20 years. Fans of the football team do little to help the state's cause.

Talk to an Auburn fan who made the trip to Morgantown last year and you'll almost certainly hear a bad story. Many that made the trip say the fans were the worst they'd encountered in all their years of traveling to games. They were described as rude, classless and mean spirited.

"We took a bus to the stadium," said one fan. "When we arrived, the driver told us to walk this way, pointing his finger around the stadium. You don't want to go that way, they'll fight you," the driver continued. "And whatever you do, don't walk alone."

If you suddenly conjure up thoughts of Deliverance, you are not alone.

Numerous fans reported being screamed at and threatened while walking through the stadium. Are we talking about Baghdad or a college campus? This comes from a group of fans whose team has really never made a blip on the college football map.

Outside of being Notre Dame's bowl victim during the Irish's run to the 1989 national championship, West Virginia has accomplished little on the field. Yet a sizable portion of its fans feel the need to make up for it in the stands - something of a little man syndrome.

I'm sure there are fine people who wear the Mountaineer colors. Unfortunately, there appears to be a sizable number of fans who overshadow what is probably overall a good group of people.

Their reputation wasn't helped after last year's movie, The Express.

In the movie about 1961 Heisman Trophy winner Ernie Davis, the Mountaineer fans are depicted as hardcore racists who scream and throw bottles at the Syracuse great. Unfortunately for the school, there's no shred of evidence it ever happened. It was all the work of Hollywood, trying to supposedly capture the essence of what fans felt during that time. It's a reputation they may never live down and that's unfortunate.

Tomorrow the roles reverse and West Virginia comes to town. Their fans have already started arriving in The Loveliest Village for Saturday night's game. They'll likely encounter some of the friendliest fans in America. It's what Auburn's known for across the nation.

Maybe you read some of the Auburn message boards and fanposts a few weeks back after Louisiana Tech paid a visit to Jordan-Hare Stadium. Tech fans raved about how great the experience was and how much fun they had on campus. It makes you feel good to read these things.

Auburn fans will need to have short memories Saturday. Many were treated rudely last season by our visitors from the hills. Rather than retaliate, let's show them some Southern hospitality - apparently they need it.

Leave your muskets at home and let the Auburn players do the fighting on the field.