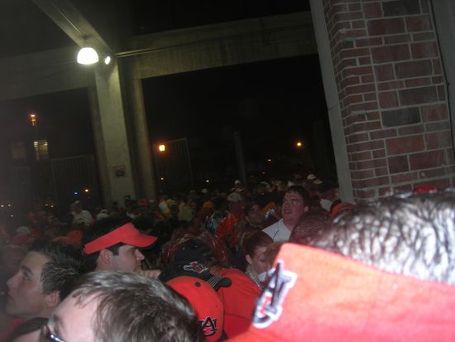 A mob of sardine-packed, soaking wet Auburn faithful, huddled on the concourse, at Jordan Hare Stadium, at the Auburn - West Virginia game!

War Eagle, everybody! I know that I promised grades up by noon today, but yesterday's weather has altered the schedule. I think I'm still not completely dried out!

It was an absolutely unbelievable trip to Auburn. We left the Amsterdam cafe around 6:15, right around the time almost 4 inches of rain was falling on Auburn. My shower head at home doesn't have the kind of water pressure that was falling out of the sky! Everything was flooding. Streets and sidewalks both, were ankle deep in rapidly flowing water. Lawns became swamps. We came down through the Goodwin Hall tunnel, and out into Graves Amphitheater, which looked like the city dump! It was a sea of muddy trash-strewn water, with pockets of people uselessly trying to huddle under their tailgate tents. There is nothing quite like slogging through muddy ankle deep water, and trying not to trip over the tailgate electrical cords or slip in the mud. We were hoping that there wasn't a generator still running, pumping amps into the murky water!

By the time we got to the stadium, despite having ponchos, hats and rain gear, we were still soaked to the bone. Could hardly see, either. War Eagle Atlanta and I mistakenly staggered up to the student section, and couldn't get in! When we finally got to the right gate, the concourse was PACKED with people, trying to stay out of the rain. There was some shelter, but the wind was still driving some water into the area.

I have to hand it to the crowd. I figured the weather forecast, then the storm would mean a LOT of empty seats. Nope. After the officials started the kickoff clock, the stadium filled back up, and by the time this one kicked off, it was a packed house of wildly screaming orange and blue! I tried to get as many pictures of this event as possible, but I didn't get much. My camera was flashing all sorts of warnings, and refusing to take shots. I'm kind of surprised that it's still working, this morning!

Game grades will be up this evening, along with an account of the game. Kudos to my colleague and fellow writer, War Eagle Atlanta, for sticking it out with us, and paying for supper and beers! It was an absolutely crazy night!