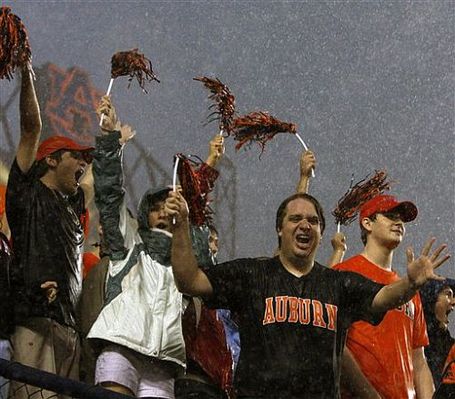 Who'd have thought that two inches of rain at an Auburn game, would be so much fun?

War Eagle, everybody! Time now for some random thoughts on Auburn football. How much difference does a year make? At this point last season, Auburn was also 3-0, but this year's outlook seems totally different. To this point last year, the offense had failed to be able to pass the ball against Louisiana Monroe, scoring only 17 offensive points. Against Southern Miss, Auburn couldn't quit fumbling the ball, and letting tight ends make catches. Then, there was the 3-2 club fight in Starkville. It was clear, after 3 games, that Auburn was going to have a tough time living up to expectations. The handwriting was on the wall, despite the 3 wins. The predicted trip to Atlanta was in serious doubt.

This year's squad was not so highly hyped in the preseason. The team is less deep, but finds ways to excel. Signs now point to a season that will exceed expectations. When I looked at the Auburn calendar before the season began, the West Virginia game was one of a handful that I thought Auburn had no chance of winning. Now, there is hope. Can Auburn win in Fayetteville? Sure, especially if the Arkansas D plays like it did against Georgia! Can Auburn win in Baton Rouge? Yes, they can, if LSU continues to hover near last place in the league, in offense. Did you know that Auburn is third in the league in rushing yards, and second in passing yards?

Earlier this year, I examined projected starting quarterbacks in the SEC, based on net yards per pass. After 3 weeks, how are these guys doing?

Passers with ratings of 6.0 or higher are going to tend to play on offenses that score a lot of points. These numbers are a little inflated, because most teams have played a cupcake or two in the first three weeks. I'd say the biggest surprise on this list would have to be that Vanderbilt hasn't done better. Larry Smith's two interceptions and only one TD pass in three games has helped Vandy to an 0-2 SEC start. The Commodores will be hard pressed to repeat last season's bowl appearance, I think. Jonathan Crompton is off to a slow start, with 7 interceptions in just three games. Jevan Snead, expected to be among the leaders, has struggled this year, even playing against only Memphis, and Southeastern Louisiana. Ryan Mallett, right now, is blowing the competition away. He's got no interceptions in two games, 6 TD passes, and has blistered defenses for 358 passing yards per game. Auburn's Chris Todd is among the leaders, at 8.4. If he hadn't thrown that pass to a West Virginia defensive end, he'd be second, at 9.0. And Todd has done it facing Mississippi State's and West Virginia's defenses.

Of course, you have to be careful making too many assumptions based on statistics. On Auburn's stat sheet at the SEC website, there are some surprises, such as Demond Washington having three rushes for 8 yards, and Barrett Trotter returning 3 punts.

There are a couple of important matchups this week, in the SEC, amid more cupcake feasting. It starts tonight, with Ole Miss at South Carolina. These are two teams that were expected to compete for division titles. South Carolina already has a loss to Georgia in the books, and Ole Miss is hoping to be a bit more impressive in the SEC season opener for the Rebels. The loser of this game well may be out of their division race. Arkansas at Alabama will impact the Western Division race. Will Ryan Mallett be able to shred Bama's defense? Even if he does, will the Hogs be able to stop Bama?

Auburn hosts Ball State this Saturday night, at 6 PM CDT, on Fox Sports South TV. We'll have an open thread up, here at TrackEmTigers.com, with thoughts on the game! While Ball State made it to the MAC title game last year, it's a squad gutted by graduation. The Cardinals haven't had such a great start to the year, losing to North Texas, New Hampshire, and Army. Auburn should be able to use this game as a glorified practice, and work on fundamentals. Auburn has hosted Ball State twice before, in 2001, and in 2005.

The season opener against the Cardinals had some interesting indicators in it. Auburn's 2001 offensive squad had been decimated by graduation (Colin Sears, Reggie Worthy, Ben Leard) and early departures to the pro ranks (Ronny Daniels, Heath Evans, Rudi Johnson). The Tigers were able to run over Ball State in the first half with young backs such as Ronnie Brown, Casinius Moore, and Carnell Williams, but we didn't show much else. Ball State held Auburn to just two field goals in the second half. Auburn's 30-0 win foreshadowed later offensive problems that would result in Auburn losing 4 of its last 5 games.

The 2005 Ball State game was a much needed tune-up for the Tigers. Auburn had dropped the opener to Georgia Tech, and had struggled to run the ball against a woeful Mississippi State team. Al Borges worked the running game against the Cardinals, and two guys we could rely on came out of the 63-3 victory: Kenny Irons, and Brad Lester. I attended that game, and frankly, it was great not having to sweat the outcome. Normally, every Auburn game I attend is a nail-biter! We got to see Tristan Davis get his first touchdown, bursting right up the middle in the 4th quarter for a 52 yard run. I think the stadium was maybe a quarter full, by that point.

Here's hoping the Tigers can manhandle Ball State, and iron out some of the kinks. War Eagle, folks, and have a great Thursday!