Share All sharing options for: Tigers Out-fly the Cardinals, 54-30 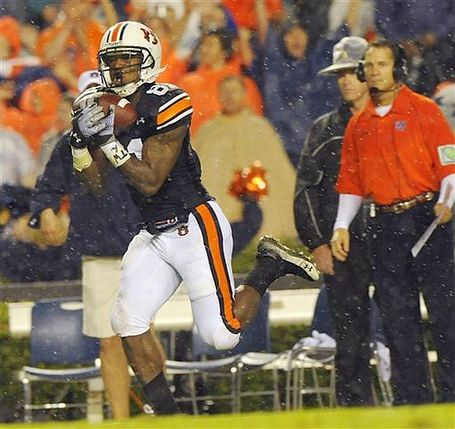 War Eagle, everybody! It's time now for the Acid Reign report, on Auburn's 4th win of 2009, without a loss! The game against Ball State was expected to be a blow-out, and I suppose you could call a 24 point win exactly that, a blow-out. But, this was hardly a well played game by Auburn. Auburn continues to suffer from atrocious special teams play, bad tackling, and tonight, an offensive line that didn't open many holes. I had singled out guard Byron Issom as early as A-day, as a wrecking ball/lead-blocking force. With Issom out today, Auburn backs got stopped for losses repeatedly, particularly running off the right side, where Issom normally plays.

Needless to say, though, when you win by 24 on a wet night with bad play, some folks on the team are doing things right. Terrell Zachary and Darvin Adams, right now, might be the best receiving tandem in the SEC. Who would have thought that, before the season? With Fannin and Trott on the inside, stack the box if you want. You're GOING to get burned! Ball State did, repeatedly! Any doubts about Chris Todd's arm are pretty much dispelled, by this point. Auburn seemed to have more rain, during the game, than last week. And yet, Todd was still throwing rockets. He's got a LOT of confidence. Yes, there were a couple of "WHY?" throws, but they weren't weak! You've got to remember, Todd doesn't yet have a full season of starting in the SEC, under his belt. We're going to get the occasional mis-read. As long as he can throw 5 TDs against no interceptions, we will go far!

Defense... I don't think tackling has improved even one iota. We could not get off the field on 3rd down often enough. Pressure was spotty. We had Miquale Lewis' number, but other Ball State backs hurt us, including Eric Williams (5.4 yards per carry), and Cory Sykes (6.3). Freshman quarterback Kelly Page was not picked off, although he kept it conservative, managing only 3.6 net yards per pass. In the end, when you let a team like Ball State rush for over a hundred yards on you, that's not so good. Especially when those guys are starting 4 new linemen up front. Ball State had 146 on the ground. Ouch.

Special teams, outside of the kicking of Wes Byrum, remain spotty, but there was actual, sneaky improvement, outside of the fumbles. Would you take a 43.5 yard punting average with no returns? Yes, you would! There was one particularly bad kick coverage issue, which led to a 31 yard Eric Williams return. But on the night, Auburn held Ball State to 18.1 yards per return. That's a definite improvement. I'm not sure it was a field position improvement, because we were kicking them shorter. A 59.8 yard kickoff average hurts. That's not even the 10 yard line!

Grades, after the jump!

Defensive Line: D. Really guys? A MAC team with four new o-line starters, and all you can manage is 11 tackles by the starters, and one tackle for loss? Ouch. We got stood up and drilled on run downs. Didn't slide, didn't control gaps, lost contain on outside plays. Pass rush, other than a few plays was pretty weak. I guess we were due, though. D-line has been playing lights out, till this game. The only thing that keeps this from being an F is a few tipped balls by Goggins and Coleman.

Linebackers: D+. Our depth problems showed again. Don't know where Adam Herring was. Didn't see him. Eltoro Freeman played A LOT, and never got anyone on the ground. Stevens and Bynes were their usual solid selves, but should have had a banner day against Ball State. Honestly, I was tempted to fail both front seven units. Didn't, because of a few good efforts to stop drives, and cause turnovers. Josh Bynes had a pretty solid game.

Secondary: B+ No, they didn't get beaten deep. They gave up that 5 yard hitch, though, all day. You don't get an A, if the other team can rely on that thing, the whole game. McFadden got his usual pass interference flag. This time, it was even justified. Safeties did a nice job. Ball State tried repeatedly to get a fast secondary guy loose over the middle, and it didn't work. They ended up with a sack or a throwaway, every time.

Punting: B. One howitzer, one high school thud ball. No returns. A B grade = "good." I was worried after the MSU game, about getting 'em blocked, but that's evidently been fixed. We're getting a LOT of coverage folks downfield. In fact, I'm not sure the linesmen are watching things as well as they should...

Punt Returns: F. Two fielded in traffic, two dropped on the ground. Total fail, here. No blocking, no pressure on the punter, not even the presence of mind to make a good fair catch. As hard as it is to believe, we went backwards, here.

Kickoffs: D. We kicked one out of bounds, and allowed another pretty long one. We brought the average return down, but was it at the expense of distance on the kick? Morgan Hull's kickoff average of 59 yards was the lowest of the season, by about 6 yards. On the other hand, the return yardage was about the same amount less. Ergo, the opponent, a MAC team with a lot of new faces, started with about the same average field position as Mississippi State and West Virginia. This was another small step backwards.

Placekicking: A+. Wasn't exactly a pressure-filled environment for Wes Byrum, but he still hasn't missed. All of his kicks appeared to be pretty much down the center.

Offensive Line: C+. I'm giving this high grade because Lee Ziemba broke his streak. He didn't get called by the refs for ANYTHING, this week. Nice job in protection, too. On the other hand, Byron Issom was SORELY missed. All of those "pulling guard" plays failed miserably, this week. John Sullen, Issom's replacement, couldn't get out on the flank nearly quickly enough, and was twitching before the snap, telegraphing the direction of the play. Sullen played on the left, most plays. Lots of raw talent there, and Sullen may well end up being one of those Nate Newton types who blows tackles 20 yards off the ball, one day. Right now, he wasn't ready for Ball State. Mike Berry, solid for most of the year on the left, was moved to the right side for this one. He didn't have his run-blocking assignments down, either. Andrew McCain had a rough day, too, as did center Ryan Pugh. Nice couple of snaps on the freeze play, by backup Bart Eddins, late. Late night word from tireless Tiger beat reporters is that Issom is on "indefinite suspension," for breaking team rules. What a blow! Tigers are hurting, on the line, henceforth.

Receivers: A-. There were some drops, but most of those were either backups, or h-back players. These guys' biggest failures were on blocking, and a lot of that was by design. The receiver can't move before the snap. Defenders can. Ball State was sliding inside, at the snap. They got a lot of guys upfield early, to shut down the Auburn outside running game. Not much a split end can do, if the guy he's supposed to block is 10 yards inside of him, at the snap. The obvious thing to do was to throw outside, and both Adams and Zachary made the Ball State defense PAY, with big plays. Same for Tommy Trott. When they had a chance to block, they did fine. When you pile up 300 receiving yards, the receivers are doing a lot of stuff right! Zachary, Trott, and Adams, War Eagle to you! I continue to be amazed!

Running Backs: B-. We didn't pick up blitzes as well, this game, and we went down from the first tackler, way too much. Mario Fannin had some drops. Onterrio McCalebb did get another BIG long-distance run. Fannin took a screen to paydirt. Eric Smith looks like a guy we need to continue to feed the ball to. Smith's blocking wasn't so great, though.

Quarterback: A. This might have been Chris Todd's best game. He showed a gun for an arm, I thought. Great reads, for the most part, and a super job of getting it in there. He's got a load of confidence in his receivers, and it's showing. He also continues to show surprising mobility, avoiding sacks. No sacks this game, even with a new freshman guard, and his tight end wearing two knee braces! Made an absolutely sensational scramble, Fran-Tarkenton-worthy, late in the game. He pulled up just before the line of scrimmage, and fired a bullet to Darvin Adams, who had posted a defender up around the 5 yard line. Touchdown. Super play, off the cuff! He had one or two passes I think he'd like back, but even Peyton Manning has those. Even on the junk, Todd threw it hard enough that the defender wasn't getting it!

Conclusions after this one: first, it's great to be 4-0! It wasn't as pretty as I'd like, but I'll take it! Against the Auburn defense, patience is the key. You're not going to beat Auburn deep. At least, not very often. You can hitch and counter your way to multiple first downs. Watch out, though. Auburn likes to strip the ball. Guys will give up a tackle, to get that ball out. It cost Ball State a couple of times. Auburn likes to keep it in front, and force you to drive the length of the field, error-free. If you make a mistake, you might get a scary zone blitz from an odd angle, on long yardage.

Punting to Auburn is as good as throwing a bomb at them, maybe better. The Auburn punt and punt return unit are a GREAT thing to exploit for field position and turnovers. The only reason this hasn't been worse, is that Auburn doesn't punt much, and doesn't force many punts. Kick returns are a good opportunity, too. Just don't expect to win the game on a missed Auburn kick. Hasn't happened yet, in 2009.

You pick your poison, against the Auburn offense. You might get a stop or two, but Auburn's coaches will figure out quickly what you are giving up, to get those stops. With home-run-hitting backs and receivers, and a quarterback making the great reads and throws, it's an awfully tough situation for a defense. Even if you're not a Tiger or Vol fan, you should enjoy the matchup next week against Monte Kffin's defense. It's a chance to see two truly great football minds at work. Here's hoping the Auburn offensive players continue their great play.

War Eagle! We'll be looking forward to a showdown on Rocky Top, all week long, at TrackEmTigers.com.