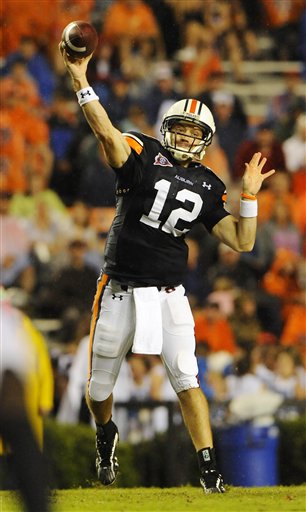 The 6th highest-rated passer in the country, currently...

Football is a game of momentum, and unlike in other major sports, it can change on a dime, mainly from the addition of the defense being able to score--something unique to the sport. We've all seen how momentum can build and change quickly during the course of a game, and we've all seen how it can build during the course of a season. The 2004 team didn't start out with much swagger, but built it gradually and deliberately. We've also seen  when momentum is ended abruptly how devastating the effects can be. You need not look further back than last year to see the wheels come flying off after the Vanderbilt game. A team without momentum is dead, and like Morgan Freeman said in The Shawshank Redemption, get busy living or get busy dying. Well said, Red.

The schedule this year seems completely probable to allow for the gradual building of momentum for a young team. Think about it. La Tech for starters, a bowl team from last year, but a mid major opponent. Then open the conference schedule with the other doormat from last year, State, followed by a step up OOC opponent who we needed to avenge a loss from last year. Top it off with a MAC team who would allow us a possible let-down game (that didn't materialize) and then step it up with your first road game against a recovering eastern division heavyweight who's still staggering a bit on his feet. Can't you see how this script is playing out? Who wrote this?

Yea, we didn't get any love in the polls this week. They haven't played any ranked teams is the standard excuse you hear. We're 27th in the AP and 28th in the coaches. The first Harris Poll has us at 26th. Never mind that no other undefeated team from a BCS conference has failed to crack the top 25. No one expected us to be here at this point, as impressive or unimpressive as you think it has been. Don't worry about the polls. The only thing we are challenging for is a right to represent the West in Atlanta--folly or not. Last I looked, you don't need no stinking polls for that, you need W's in the column. Think the players gain confidence and the team momentum from polls? Not this team. They get it from something else--each other.

This team wasn't on the map. They're under the radar. The perfect storm for Barners? Nah, that's the stuff that fairy tales and Urban legends are made of. But this is essentially the same team from last year, the ones who got beat down into the ground by the traumatic events of the season and their coach's departure. Gene Chizik has since arrived on the scene and has restored faith in these players and taught them to believe in not only themselves but EACH OTHER. Their accolades have thus far come from their peers. The selfless sportsmanship of Kodi Burns. The pinnacle of come-backs by a restored Chris Todd. The dawn of fresh talent like Onterio McCalebb and Darvin Adams. Not to mention the calm stewardship of Coach Chizik and the unbridled enthusiasm of Trooper Taylor.

The relationship between momentum and confidence is similar to that of the chicken and the egg--you're not sure which one comes first. Must you first have confidence before you gain momentum, or can that be obtained on it's own? And is confidence in yourself stronger if it is instilled by outside forces like recognition for individual acheivements and poll rankings?

Auburn is still a top 5 team in rushing nationally, even after the sub-par performance against WVU. That's something that instills amazing confidence in the team, even only four games in. The fact that Ben Tate and Onterio McCalebb are ranked 14th and 24th individually brings confidence to the team as well as to each individually. Chris Todd is currently the 6th highest-rated QB in the nation, ahead of even Tim Tebow, with 9 TD passes his last two games. But which stat breeds more team confidence? Todd's or the fact that we lead the nation in total offense? Hard to decide, but it's a great choice to have right now.

And what can the combination of confidence and momentum do for a team on the rise? The examples are many, but being Auburn fans and suffering from a genetic defect that makes us want to compare ourselves to Tuscaloosa, I say look back no further than last year's Crimson Tide team. They too were coming off a previous season that imploded, but had talent and great coaching. Unlike us, they were catapulted by that initial blowout of a top 10 team in Clemson, but that came as big a surprise to their fans as any one else. Even the fine folks over at RBR never suspected that the 2008 team would be as great as it was. They got a quick head of steam that soon rolled over #1 Georgia and it was off to the races. Once a team believes in itself and climbs that mountain as a unit, it can take an awful lot to knock them off.

What will this 2009 Auburn team be able to acheive? That remains to be played out, but if the first third of the season is any indication, it should be special. Momentum doesn't always have to be measured in a calendar season. We're a young team, and this year was supposed to be a write-off during the transfer of coaching power that took place. Upping the timeline on rebuilding or reloading only serves to better the succeeding years. With a new, energized staff that won't lay down against any of the recruiting powers in the country, Auburn will become a force again that much quicker.

And as the players and the team feed off the crowd in the stadium for much of their momentum, we here in fandom can keep it going by continuing to support our team in the myriad of ways that the internet allows. This season has already proven itself to be something special, and we could still have a whole lot more in store. It sure would be nice if we could share it all together here at this site, too.