Lost and Found: Houston Cougars, We Have a Problem

Share All sharing options for: Lost and Found: Houston Cougars, We Have a Problem 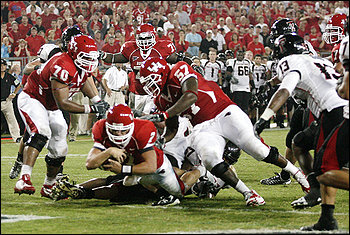 Keep both hands on the ball AND your hat!

Houston coach Kevin Sumlin has made a plea via Twitter and the media for the safe return of three Cougar football helmets that were apparently lost during an onfield celebration following the victory over Texas Tech Saturday night. Said Sumlin, apparently desperate not to receive three ongoing 15 yard unsportsmanlike conduct penalties for the removal of the helmets:

"Saturday night was fun, but it will be hard for 3 of our guys to play this week without their helmets. Please return, NO QUESTIONS ASKED."

Despite the Cougars moving up to #12 in the AP poll after big wins against Oklahoma State and Texas Tech, apparently their athletic department budget dips into the red replacing three missing $200 helmets. Maybe they might track down some leads, pushing the 'no questions asked' pledge? Seriously, you guys don't stock a few extra pieces of equipment? What do you do if a massive tsunami washes through Houston and floats all the shoulder pads out to sea?

These things are bound to happen, especially when you allow fans to roam free on the field after a game. Your fans can't act like they've been there before? I know it's been 20 years since Jack Pardee and Andre Ware lit up the likes of SMU's soccer team for 95, but I think you've supplanted that moment for most embarrassing feat in school history: the meek plea for the return of a couple football helmets so that some of your players don't have to share them, or worse, play without them.

Anyone else think that the Dread Pirate Leach is somehow behind all this? Hmmm....