Could the SEC Title Game Have Had a Rematch in 2009?

Share All sharing options for: Could the SEC Title Game Have Had a Rematch in 2009? 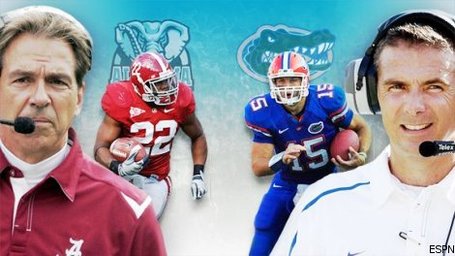 Some assorted musings on the state of the conference, this, the first week of withdrawal from college football addiction.

If you can't beat 'em, join 'em. Wish it was that easy. Especially if you're the rest of the country watching the thorough dominance the SEC displayed the last decade. HALF the BCS crowns and the last four in a row. Not to mention six out of the total BCS matchups ever played AND that lone asterisk in the mix--undefeated Auburn getting left out in 2004. I'd imagine the rest of the country is getting a little sick of the SEC by now. Can't say I blame them, with the boys from the southeast definitely on the rise.  Will the rich keep getting richer in CFB's premier conference, or will parity start to prevail?

Whatever happened to the old adage "they eat their own"? The best defense against a kick-ass conference used to be that they all played each other. Back in those days, one loss was enough to knock you out of national contention. A top heavy conference would give way to some other team from a weaker conference but with an unblemished record. Then the SEC pioneered conference championship games, and things began to change. At first, the CCG was the whittling-down process that most expected, and eliminated many a SEC team from national championship contention. But then it started to evolve into something different--a bona fide seal of approval ensuring the survival of the fittest. And one or two losses wasn't necessarily a deal-breaker on the national scene anymore.

Maybe it went unnoticed this year because the two best teams in the country all year long went all the way down to the SEC championship game before one of them was to be saddled with a loss. But if you think the idea of a team losing a conference championship game negates them from the BCS CG, think (CH)Oklahoma in 2003, losing to Kansas State in the Big 12 game. Not only did that loss NOT keep them out of the big game, they didn't even drop a notch in the final BCS poll. Eventually they were exposed by LSU in the Sugar Bowl, but the BCS showed it's determination to get the team it wanted. (much like 2-loss LSU in 2007)

Don't think that the BCS could never rematch CCG foes in a BCS CG? Remember the strong sentiment following the Ohio State-Michigan game in 2006, the final regular season game for both schools and typically a de facto CCG for both Big 10 powers in itself? Both teams came into the game #1 and #2, and after a razor-thin Buckeye win, both teams came out 1 and 2, too. People were talking about a rematch in Glendale for all the marbles. Had USC not lost to UCLA their very last game, it's doubtful that Florida's win over Arkansas in Atlanta would have been enough to propel them past the prohibitive favorite Big 10 schools. So it could happen.

I think the perfect storm that would have ensured a Tide-Gator rematch in Pasadena would have been for Texas to have lost to A&M, and to have beaten Nebraska handily in their CCG. That might have rippled the BCS enough to where neither Cincinatti and TCU would have moved up past Florida for the #2 slot (and be the first mid-major to land in the big one). Both were so far behind Alabama and Florida, and considering the diminishment of the human polls that serve as a check and balance against such rampant populism, a closer SEC game might have resulted in the first rematch of the BCS era (Yea, Florida-FSU in 1996 was PRE-BCS, technically). And what would have been the fallout from such a catastrophe? Probably the ushering-in of a playoff years ahead of schedule!