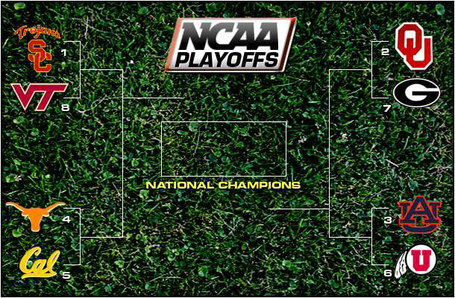 It's that time of year again--when the season is done and playoff talk can ensue until spring drills begin. What what a better way to kickoff the discussions with news that the BCS revenue sharing is up and that Congressmen are once again interested in regulating our fair sport. In an announcement that is likely to impress diddly-squat outside the BCS conferences, the AP is reporting that the BCS will pay out a record $24M to the non-BCS conferences in shared revenue from the BCS bowls earlier this month, up from $19.3M a year ago. The bump is primarily due to for the very first time, that two teams from these conferences--TCU and Boise State--went to BCS bowl games. Approximately $9.8M will go to the MWC and $7.8M to the WAC. $6.4M will be divided by the MAC, C-USA, and Sun-Belt conferences.

Naturally, these amounts pale in comparison to what was paid out to the BCS conferences--The SEC and Big 10(11) got $22.2M each and the other four got $17.7 a piece. The difference being that the former conferences sent two teams each into BCS bowl games: Florida to the Sugar, Alabama to the CG, Iowa to the Orange and Ohio State to the Rose. BCS executive director Bill Hancock says that these disbursements prove that the BCS is "fair and appropriate".

Not so fast, my friend. Grumbling can still be heard, most notably from those who were upset that the two upstart teams were forced to play each other as opposed to tackling some of the more traditional powers slated for BCS bowls. And Congress is once again entering the fray. Joe Barton, R-TX, a representative from the aggrieved state of Texas (for TCU, not for the Longhorns. Okay, maybe both.) showed once again that no one from Congress can accurately define just what in the hell the BCS is supposed to do.

"What is the BCS theoretically about? I thought it was about the best teams playing the best teams. This simply acknowledges the reality that's it's not about that, but about revenue sharing. It's an economic cartel."

Once again, class, we will tell you what the BCS is about. Not just theoretically, but actually: It is designed to match the #1 and #2 teams in the country in a championship game. It's as simple as that. It's very ad hoc, but others want to dress it up and make it into something that it just isn't. IT IS NOT A PLAYOFF SYSTEM. If you want a playoff system, then install one. But don't try and bash the BCS in it's current state for not being something you want it to be. And maybe all that money can go into an escrow account until you've finished your bitching.

As far as a future playoff goes. For easy reference: Top 2 team playoff equals one extra game--basically a bowl game--what we have now with the BCS--a de facto one game playoff. Top 4 teams: equals two extra games over the regular season--extra game could run the second week in December before the middle-tier bowls. Could utilize bowl games to play it out, but would more than likely be home games for higher-ranked teams.Top 8 teams: equals three extra games to determine a champion. Would run through most of December. Could utilize home stadiums, then maybe bowls for the semi-finals and then the traditional NC game?

The skeptic in me still thinks the following about a future playoff:

So how do you think a playoff will gradually come about? What's the best way to have as much equity in the process as humanly (and computerly) possible? Die-hard junkies and proponents can get more over at sister SB blog BCS Evolution. Should SEC fans even WANT a playoff, what with the SEC champ a virtual lock for the NCG these days? The status quo has never looked so good.