Three's A Charm!!! Perspective From the Not-So-Cheap Seats

Share All sharing options for: Three's A Charm!!! Perspective From the Not-So-Cheap Seats 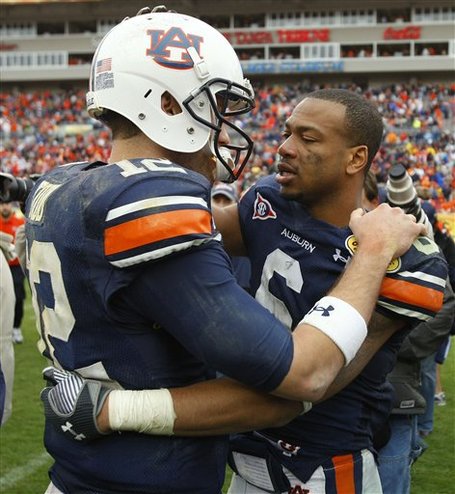 Like thousands of other loyal Tiger fans, I made the trek down to Tampa for the Outback Bowl, and unlike the weather, the game did not disappoint. For a weekend that saw a very cold front move across the southeast, I think we're lucky to have gotten our game in the books before it really got nasty. The same front that rained on our game quickly moved up to Orlando and dumped buckets on the Capital One bowl. If you saw the highlights of LSU-Penn State, two words come to mind--the first one being mud.

If you've never been to Raymond James Stadium, it's among the best I've seen. Situated at a junction of major highways and roads, it's easy to get in and out of and the parking is simple to follow--even for a grass lot. We had a parking pass and were only about 300 yards from the gate. Getting out was a piece of cake. I noticed where some Tiger fans had parked in the boonies, expecting a massive wait exiting the place, but their fears were unfounded. Attendance wasn't a sell-out, which probably helped tremendously.

Going inside was simple enough and the seats were spectacular. We were on row J, and we were about as close to the field as you would be sitting on row 1 in JHS. Our tickets were on around the 10 yard line, but we were on the Northwestern side, which really wasn't that bad because most of their fans were tucked away in the opposite corner of that side, PLUS we were directly across from the Auburn band. You're probably like me and usually sit on the same side as the band in Jordan Hare and don't really notice the sound volume when they play. But when you're directly across the way, it's very loud, and it was so great to hear War Eagle drown out everything else in the stadium. I heard a lot of Northwestern fans compliment our band and marvel at how many of them there were. That's one of the things I've always liked about Auburn--we bring the band everywhere and they represent well. I guess that's something that having a big time CFB program affords you to do. We should probably acknowledge it more than we do.

I originally had five tickets, but three friends of mine who were locals backed out that morning because of the weather. Can't say I blame them, not being Auburn fans. Sitting in the drizzle is something only the die hards can be expected to do. Personally, I had come all the way down there and not even having Wally World closed would have deterred me. The only problem was what to do with the three leftover tickets. I decided to sell them but I knew they weren't going to fetch but a pittance of what I paid for them. Even had the weather been perfect that day, I'm sure that tickets would have been plentiful. Attendance was listed at just under 50,000 and the stadium holds 65k. Northwestern had sold out their allotment, but there was easily twice as many Auburn fans there than were Wildcats. I got $120 for my three seats, which was half the price. For the fan on a budget, I would have rolled the dice picking them up on the grounds. 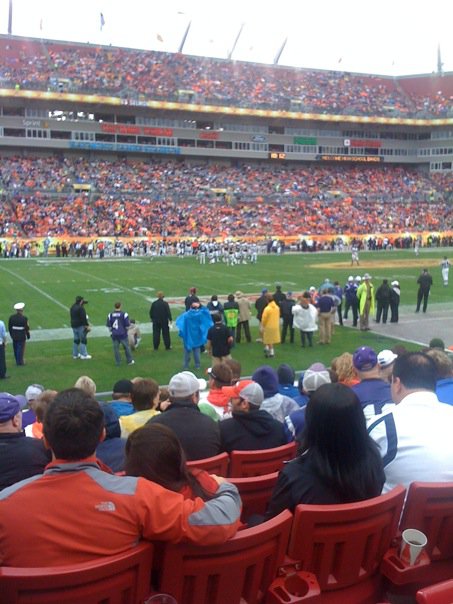 The lower ring was full, but the upper decks were sparse. This is a view you don't usually see on TV.

The game itself will go down for most fans as one of the most exciting in Auburn history, but for me and more than a few Tigers in attendance, it was one of the most dreadful. Sitting there in the rain and watching your team give away their hard-fought victory is hateful. It started early. I knew we were in trouble when we went up 14-0 seven minutes in, and I remarked as much to some Northwestern fans sitting behind us. As fast as these guys were running plays and as quick as they were moving the ball down the field, not to mention Auburn being Auburn, I knew it would be a foot race until the end. From the perspective inside the stadium, it was a see-saw game and our failure to put the game away was devastating.  It was hard to see a lot of things from our vantage point--especially those late 4th quarter officiating calls. All we could see was our lead collapsing and the Wildcats closing in. It was evident early on that they were going to forsake the run, and we fans were left to witness an aerial onslaught the likes of which Auburn has never seen before.

I have to hand it to Northwestern. They never quit all day. I have a lot of respect for that team.Their plucky receiving corps was a gritty bunch who made some spectacular catches. Mike Kafka is a good looking QB who has the size to make it in the pros, not to mention the gumption.  Even after all those picks, plus about three more almosts, he kept slinging it. That guy has the fade down pat. I thought for sure he was going to be the only QB I'd ever seen to throw that many picks and still win the game. On paper, he looked like Matt Stafford in Detroit, but on the field, he had me believing he was Tom Brady. After the game, I guessed that he had thrown it around 60 times, but I was in utter shock when I discovered it was actually 78 attempts and 532 yards.

In the end, our guys had the stuff to outlast Northwestern and survive the Outback Bowl. I'd like to say I was all pumped up over the win, but the truth was that I was depleted. A fan's emotions are at a fever pitch during the course of a game. They're constantly up and down, just like the pace of the action. I thought we finally had it in the bag when we went up by 14 with under 5 minutes to play. Mentally, you breathe a sigh of relief. But when fate rips that comfort from you like a fumble being ripped from a Demond Washington kick return, it hits you hard.

In the stands, you just have to take it. There's nothing you can do expect watch that momentum all but drain from your team. I was already in shock that last four minutes after witnessing the fumbles, the penalties, the two touchdowns, the three 4th down conversions and the two point conversion--not to mention the game winning FG attempt. I was a wreck going into overtime. And the two premature victory celebrations by Auburn on Northwestern's last possession almost did me in. I'm glad that the Wildcats had the stones to go for that fake. I'm not sure I would have lasted another overtime. Maybe I'm just getting old. Come to think of it, my odometer did tick another mile up earlier that very morning. Thanks for the gift, Auburn.