Finally! The Truth About How Alabama Got Twelve

Share All sharing options for: Finally! The Truth About How Alabama Got Twelve 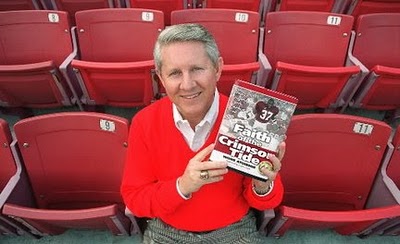 On the eve of Alabama possibly winning it's eighth legitimate national championship, we have this article from The Birmingham News that finally answers the age old question of how Alabama came to claim 12 MNCs. It is a subject that we here at TET have delighted in answering for quite some time. Meet Wayne Atcheson, former Alabama sports information director and the man that 'won' more national titles for the Crimson Tide except for the Bear. In 1983 (he claims) as the first year director, he added five back-dated and minor-selector titles to the Tide media guide. Taylor Watson, current director of the Bryant museum, says that it was in 1986. A look back at the 1982 media guide lists only those six titles won under Bryant (other than a footnote denoting 1934 as one).

Said Atcheson: "I've talked to university officials about it. You're about the first reporter to ever ask me about it. I want to say the right thing here. I made the change because Coach Bryant had these 25 years and six national championships and they were emphasized so much. It was on all the stationery. And when I got there, it was a matter of seeing there were five others and we should put them all together. It was as simple as that."

According to the NCAA, only 'consensus' national titles go into the 'record books', a term used selectively as we all know that the NCAA does not sanction a title in FBS football. A consensus national title is considered to be any title bestowed after 1950 by any (but not necessarily all) of the following NC selectors: AP, UPI, Football Writers Association of America, National Football Foundation/College Football Hall of Fame, USA Today/CNN or USA Today/ESPN. Hmmm. So what made Atcheson do it?

"I tried to make Alabama football look the best it could look and just make it as great as it could possibly be," Atcheson said. "I was a competitor myself with the other schools, and what they bragged about and boasted about, I wanted people to know the best about my school."

In other words, he embellished it. And so many Tide faithful take that as the gospel for Alabama football tradition--and it happened all from the mere stroke of a pen. It reminds me of the scene in Catch-22 when Yossarian moves the bomb line. But I digress. And so as Paul Harvey used to say, now you know the rest of the story.