Auburn's Athletes Then and Now

Share All sharing options for: Auburn's Athletes Then and Now 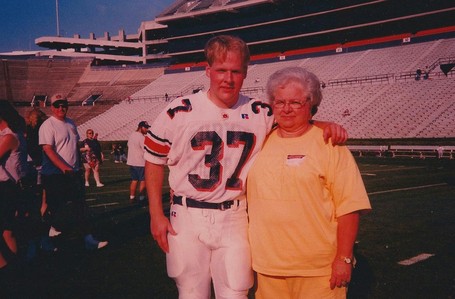 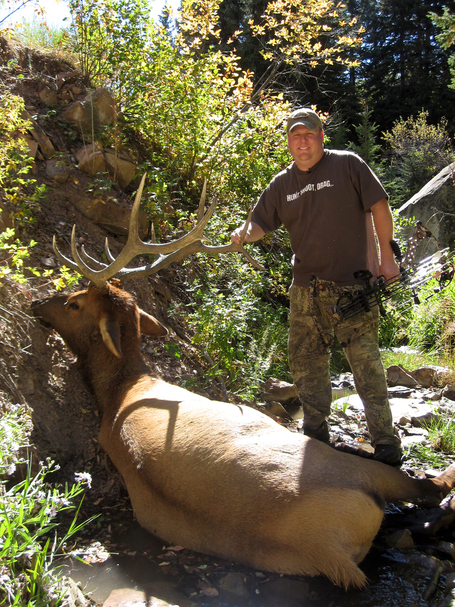 On the left with his Mom is Justin Martin as a Walk-On at A-Day. On the right is his latest as a successful Hunting Show host.

Volunteer- Wikpedia - in general terms, is the practice of working on behalf of others without receiving financial gain. Believing in something strongly enough to give freely one’s time and effort.

If you can put yourself in their shoes for a moment, imagine wanting to play for your favorite team so badly, you would turn down an offer from another school. Many of Auburn’s walk on football players are invited to try out for the team, without any guarantee they will even make the squad. Most do it just for the love of the game. All of them do it for the love of Auburn!

Justin Martin began his career at Auburn by walking on and making the team in 1997. Hailing from Enterprise, Alabama Justin now has a successful career in the Hunting, and Construction industry.

I have had the pleasure of meeting Justin through my love of the outdoors. While attending one of his preview parties, I approached him about an interview and he graciously accepted. So I gathered some questions I thought you would like to ask him, and through the emails back and forth here we are……

This is an Auburn Sports blog, let's start with some questions about your time at Auburn.

1.When did you first enroll at Auburn?  I graduated Enterprise High School in 1997 and enrolled at Auburn that Fall.  I showed up to camp that August.

2. You were a walk-on, describe the process that you went through to play football at Auburn, and who your coaches were, what positions you played, and such.  The process involved with making the team as a walk-on involved having my high school coach send tape to the Auburn coaches of my highlights as a kicker in high school which included a 53 yard field goal, 83 points and 85% touchbacks on kickoffs as a high school, senior.  My coaches at Auburn were Coach Parker and Coach Hines.  I was solely a place kicker and kickoff specialist in high school, but once at Auburn, they had me working on punting as well.

3. Are there any memories from your time as a player that you would care to share with us?  I will never forget Coach Trickett pulling me away from the kickers one afternoon and telling me to buckle my chinstrap.  I was going to be offensive lineman, Geno James' blocking dummy!  I told him "Coach, I'm just a kicker."  He replied, "Pretend you are a monster defensive end in the SEC now!"  That was a far stretch for a kid that was 5'10", 179 pounds and slow!  Fortunately, it was just pass blocking and Geno took it pretty easy on me.  Geno, of course, went on to a very successful career in the NFL.

4. What is the single most important thing that you learned while at Auburn as a football player?  I learned that you have to be self-motivated.  At the college level, especially when dealing with walk-ons, you have to be motivated by your own desires to get better.  Every individual, has to depend on themselves to get better and then combine that into the team effort.

5. You also met your wife there?  After my playing days, while I was finishing my degree, I met my wife, Anna Beth.  We have been married for over three years now.  She is extremely supportive of all of my endeavors and we really cherish the time we spent in Auburn together and always enjoy going back for the games now.

6. What was your major?  I majored in Ag Economics for the majority of the time and then switched to Sociology.  That really helps me with the public relations side of the businesses I am in now.

7. Has sports always been a part of your life?  Sports have always been a huge part of my life.  My Dad nailed a 2 x 6 in between two pine trees in our front yard when I was 7 years old for a goalpost.  I remember as a little kid being in the front yard and pretending I was Win Lyle kicking a game winner for The Tigers.

8. How has team sports at such a high level helped you?  Team sports at a high level really helped me learn how to interact with others to work towards a common goal.  You have to learn that you can't do it all yourself sometimes.  That goes for sports, or for business.

9. Do you stay in contact with any of your former teammates?  I work really closely with Ben Leard on the outdoor television stuff.  I guess you could say Ben is my main "go to guy" when I need to get something done.  I also hear from Brent Turner, who was the long snapper when I was there as well.  Kevin Gentle, who was a kicker, now works for a company in the outdoor industry, so we talk shop every once in a while.

10. What if anything has your time at Auburn done to prepare you for your lifestyle?  I think it all goes back to self-motivation.  In college, you have to make yourself go to practice, study, or go to class.  With construction and outdoor television production, you have to rely on your own motivation to do the job right and make it the best it can be.

11. Please tell us about yourself, what you do now, and how your multiple careers are going.  I live in my hometown of Enterprise, AL where I own a real estate development company, M & S Development and a construction company, M & S Construction.  I develop subdivisions in this area and then build the houses in them.  I am the general contractor.  My love of the outdoors and many years in the archery industry have led me to create, Martin Outdoor Entertainment, which produces my television show on Outdoor Channel, The Season with Justin Martin.  This is a real passion for me.  My career as a professional archer opened the door to allow me to really work with my creative side in television production for the outdoorsman.  The Season with Justin Martin began in July and will run until the end of the year.  The show follows me as a homebuilder, husband, professional archer and hunter.  It has done really well so far.  I also still compete heavily on the professional archery tour.  I won the World Championship in 2003, was second in 2005 and in 2007.  The archery tour runs from February to August of each year and I travel all over the country competing.

12. Who influenced you most in life?  My Mother has really been a big influence on me.  She has gone through so many things in her life.  She has lost two husbands and a son, but continues to be a beaming example of what a Christian should be.  I really look at her as a role model for strength and perseverance.

13. Who influenced you most in athletics?  I would have to say that my high school coach at Enterprise, Bill Bacon, really influenced me in athletics.  He was always there to encourage and kick you in the butt when you needed it.  I was told flat out that I wasn't the most talented kicker, but I worked harder than anyone else at it.

14. What's your fondest memory while at Auburn?  I had so many fond memories at Auburn.  I met my wife there, but in a football sense, it has to be making a tackle on a kickoff in the A Day game. I will never forget hearing my name in Jordan Hare for the first time and coming back to the sideline and Coach Whitt was there and said "I can't believe a kicker made a tackle!"

15. How do you juggle both the hunting show and construction business?  I really rely on some good people to help me juggle the construction and hunting show business.  I have a great group of guys that handle the construction.  They know what I expect and they work really well together.  There are many times that I am in a treestand and answering the phone to talk about a house that is being built.  It goes back to the "team concept".  On top of all that, I really try to make sure my priorities are in order and that family comes first before both.

16. Are there some things you see at Auburn currently that you like about the football team?  I really am impressed with the job that Coach Chizik has done at Auburn so far.  I think it is great that he has embraced and encouraged the "family" concept and tradition that we have here at Auburn.  To me, that is what makes Auburn University different from most other places.  I think the coaches have a great game plan in place and just need the time to let it all fall into place.  A couple more recruiting classes and coaching the players up should put us as a program right where we should be.

17. Any advice for potential walk on players?  My biggest piece of advice for a potential walk on is to remember these three things:  Self -confidence, preparation and perseverance.  You have to believe you can get the job done, prepare to do it and be able to stick with it.

It was really cool to hear from Davis Hooper, #45, who is a walk on running back at Auburn the other day.  He sent an email to me and said he was a big fan of the show and is a bowhunter himself.  It's always good to hear positive feedback, especially when it is from a fellow plainsman.

"The Season with Justin Martin definitely has an Auburn flavor to it.  In a lot of the hunts you will see me wearing a camouflage Auburn hat and referring to my days at Auburn.  Ben Leard and I will also be at the LSU game this year filming some stuff on the sidelines that will be included in some episodes for next year".

Justin ended his career at Auburn with a torn hamstring he sustained during kicking drills with Rob Bironas, who is with the Tennessee Titans. He never fully recovered and had to make "the hardest decision in my life up to that point"

You can watch Justin Martin's show THE SEASON WITH JUSTIN MARTIN on,