Share All sharing options for: Cam Newton for Heisman! 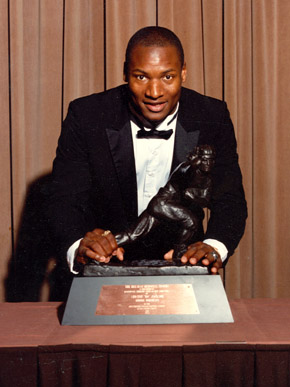 You heard it here first. Auburn University hasn't mounted a concerted Heisman campaign since Vincent Edward Jackson in the fall of 1985. Are they doing it again? No, not officially, but murmurs started to appear after the South Carolina game, and after a much needed rest last week against UL-Monroe and the singularly dynamic game tonight against Kentucky, there can be no doubt that Auburn QB Cameron Newton has to be one of the front-runners in the race for the highest honor in College Football. Certainly ESPN, whom Auburn can't be televised enough by, seems to think so, with much ballyhoo during tonight's pre-game and a first half performance that should have simply been named the Cam Newton Show.

Pick your poison among the nation's elite big-man quarterbacks--Arkansas's Ryan Mallet or Ohio State's Terelle Pryor--neither can match the complete explosiveness of Cam Newton. Mallett may have the golden arm, and Pryor can also beat you with his feet, but Newton can do both equally well, if not better, and steamroll your linebackers for good measure. He had over 400 yards in offense tonight--198 rushing and 210 passing and all four Auburn TDs on the ground. As the stats sit at this moment, Newton is the #1 QB in the nation for pass efficiency and is the de facto leading rusher in the conference if you discount his zero carries in the gut game last weekend. A likely candidate for either SEC or national offensive player of the week yet again this week, defensive coordinators shiver at the thought of having to bring down the man playing amongst boys in the SEC and FBS.

Mark Ingram, last year's Heisman winner who missed the two opening games this season due to injuries, showed numbers similar today to his Auburn performance last year, and will only be mentioned in future Heisman polls as a footnote and possible predecessor to Newton. Ryan Mallett is the only real competition in the conference for Cam. Mallett posted his 5th straight 300-yard plus game, but remains six spots behind Newton in efficiency--despite having no where near the rushing ability. Plus, he's suffered at least one loss already, which doesn't bode well in contemporary Heisman ballots.

Only two players nationally match Newton in both passing and rushing ability: Michigan's Denard Robinson, who as a QB leads the nation in rushing, suffered a loss today against Michigan State, severly diminishing his chances. (Robinson ranks 3rd nationally in QB rating currently) Ohio State's Terrelle Pryor, perhaps the Heisman front-runner at this point, is ranked 14th in efficiency and just out of the top 30 in rushing. Ohio State won again today and is favored to win the Big Ten. Winning out the conference would make him the man to beat, barring a disaster.

I'll predict right now from all the chatter that a QB wins the Heisman this year, and we call know that a team that is winning will have the predominate advantage over teams that are not. Boise State's Kellen Moore is a contender, but with the Broncos' schedule not universally respected, his candidacy is a long-shot. You want another bold prediction right now?  If Auburn wins out--scratch that! If Auburn WINS the SEC, barring injury, Cameron Newton will win the third Heisman trophy brought to the Plains of East Alabama--another for the only school where the trophy's namesake had tenure. YOU HEARD IT HERE FIRST! After tonight's performance, tell me I'm wrong!