Share All sharing options for: Tigers Emerge Victorious in Lexington! 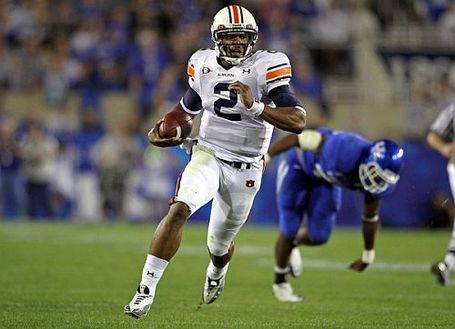 Can this guy be stopped?

War Eagle, everybody! It's time now for the Acid Reign report on Auburn's hair-raising 37-34 victory over the Kentucky Wildcats. Looking over the box score of this one, it's hard to figure out how the game was this close. The Tigers outgained the Wildcats by 185 yards, turnovers were equal at one apiece, and Auburn won the time of possession battle by over 3 minutes. One small stat that stands out is that Auburn was penalized 8 times to Kentucky's 2. We got most of those flags in the secondary, either for interference, or for hits out of bounds. We kept many Kentucky drives alive on those things.

Except for a dismal 3rd quarter, the Auburn offense had their way with the Kentucky defense. The Wildcats can't be happy with surrendering 311 rushing yards. As usual, Auburn did it with Cam Newton, who carried 28 times for 198 yards and 4 scores. The rest of the team managed only 24 carries for 122 yards. Newton also passed for 210 yards on 13 completions in 21 attempts. On a day when many front-runners had bad days, Newton continued to put up numbers worthy of a Heisman candidate. The third quarter swoon was mostly Newton, too. He opened the period with a throw behind Emory Blake on a crossing route that was intercepted. Incompletions doomed the next two drives to three and out. Without an effective Auburn punting unit, Kentucky used those opportunities to run off 17 points on short fields. Newton did not back down. He hit big passes to Terrell Zachary and Darvin Adams to move the chains, and added three runs on a field goal drive. On Auburn's final possession, Newton carried the ball 10 times as Auburn ground the clock away.

Wes Byrum won yet another game with his field goals, but aside from place-kicking, this was a poor Auburn special teams effort. Randal Cobb averaged 28.7 yards per kick return, and Derrick Locke tallied 31.5. This enabled Kentucky to start most of their drives near midfield. Kentucky has a kicker in Joe Mansour who can kick off to the end zone. We need us one of those! We burned the redshirt of freshman punter Steven Clark, and only got a 34 yard average out of it.

Watching the game, I felt like it was the worst defensive performance of the season, by far. I was absolutely shocked to look at the stats and see that we held Kentucky to 336 total yards. With Ryan Mallett bringing his arm to town next Saturday, I thought it was a terrible time for the secondary to regress, and for the pass rush to disappear. Auburn had no quarterback hurries, and only a single sack from Craig Stevens. For the life of me, I can't understand how a starting secondary of all-upper classmen can't figure out how to line up. Most of these guys have multiple YEARS of SEC experience, and yet we left Randall Cobb, KY's most dangerous player, uncovered in the slot repeatedly. I don't get it! For all the ripping on the secondary, though, they did make Kentucky work for it. Checking the box score, four of the top five tacklers were in the secondary. Add in former safety Darren Bates' 8 tackles,and you've got 33 of Auburn's total 72 tackles.

Defensive Line: C. This unit managed very little pass rush, and that was against a line with only one returning starter. They did fill lanes, though, and Auburn held Kentucky to a 3.7 yard per carry average. Kentucky double-teamed Nick Fairley, and slowed him down to 3 tackles. When that happens, someone else on the line must be able to beat a one on one block. It didn't happen Saturday.

Linebackers: C. The linebacking corps, particularly Craig Stevens, was pretty solid on most running plays. For every two or three stops for nothing, there would be a big run given up. Randall Cobb made everyone look bad on one run-all-over-the-field scramble for a score. I had hoped that we'd get better coverage of tight ends and slot receivers from this crew this season, but it looks like they often don't know who to cover. Hartline really picked us apart underneath.

Secondary: D+. Any time you allow the opposing QB to hit 23 of 28 passes, you aren't covering too well. Only one pass was successfully defended all day, a rake-out job on a hitch by Demond Washington. Otherwise, Hartline was able to take the snap, five-step it, and connect with a wide open guy. I ask again, how do these veteran guys decide not to even put a man on Randall Cobb in the slot? We've got TWO position coaches in the secondary, plus a head coach with a defensive backfield pedigree. I can't understand why we aren't better here. Passing grade because these guys did make a bunch of tackles, even if a few of them were out of bounds. If they can't see Cobb in the slot, they probably can't see the white sideline, either.

Punting: D. You've got to have a punter that averages 40 yards, in the SEC. We're not there.

Punt Returns: I. It's hard to grade this. Tydlacka did not kick it to Carr but once, and Carr wisely let it go for a touchback.

Kick Returns: D. We are not blocking these well at all. Washington only managed a 16.5 yard average, and had a near disaster with a bobble on the last one.

Place-kicking: A. Wes Byrum was again perfect on scoring opportunities. He cooly smacked the game-winner right down the middle. His lone kickoff was a short 55-yard knuckler. Cody Parkey was OK, nothing special on kickoffs.

Offensive Line: A. Against another SEC defense, this unit excelled. Kentucky had no sacks, and only two tackles for loss. That's a line that's doing some serious damage up front. Minor points off on Brandon Moseley getting an illegal formation flag for lining up too far back. That's a small quibble, though. Moseley has really come on, and is playing at a pretty high level, as are all of the starting linemen. These 300 yard rushing games on SEC teams are awesome!

Receivers: A. One of the reasons Kodi Burns stays in the game despite not catching the ball is some really effective blocking. That continued against the Wildcats, and Kodi did get his first reception, and what a good one it was! Darvin Adams made some clutch catches in traffic. We did have a couple of drops in this one, but far more often these guys go get balls that maybe could have been thrown a little better. Zachary's fumble was a scary thing. It could have been ruled either way.

Running Backs: B. There were some decent runs, decent pass protection and McCalebb did a nice job on a bubble screen reception. I think these guys were overshadowed by Newton, and actually had a pretty good game. Michael Dyer was rescued by the line after losing the ball once.

Quarterback: A. Cam had a pretty brutal stretch to start the third quarter, with a pick and drive killing incompletions on his next three pass attempts. Aside from that, he's making the awesome look routine. It's hard to measure what it means to an offense to have the ball in the most dangerous runner's hands on every play! Newton had a pretty good day throwing, and made good choices. The interception was the right read, just a bad throw. Cam had one throw that went 40 yards in the air complete to Burns while Cam was falling backwards. I think everyone's jaw dropped on that one! Best of all, Cam rose to the occasion when the game was on the line. He took command, and gut-checked us inexorably down the field for the winning kick. That's a great quality bit of leadership shown on the road in the SEC. Bravo, sir! A big War Eagle!

As far as revenge on Kentucky goes, I think Auburn did exactly to them what they did to us in 2009. I know it had to be gut wrenching to watch that last drive, as Kentucky was helpless to stop the machine. We felt the same way in Auburn, when Cobb and co. ran over us late. The way the Kentucky offense was playing, I know they'd have liked to had the ball back one more time. I don't think opposing fans like seeing Wes Byrum enter a tight game late. You know the game's over at that point!

With the next two games, Auburn is in great shape to take command of the SEC Western Division. Both will be at home, against strong teams (Arkansas and LSU) with flaws. The pressure's on next week, as the Tigers will host potent Arkansas on CBS national television. It's a great opportunity for exposure, but it's also a chance to choke on the big stage. The Razorbacks are beatable, but it's going to take a much better pass rush and coverage effort than we showed against Kentucky. I'll be at the keyboard again next Saturday, but I'll be in the stadium for LSU.

War Eagle! We're half way through the season; can you believe it? Auburn remains unblemished, and has a chance to run the table and head to Atlanta! Football life is great in Auburn again!