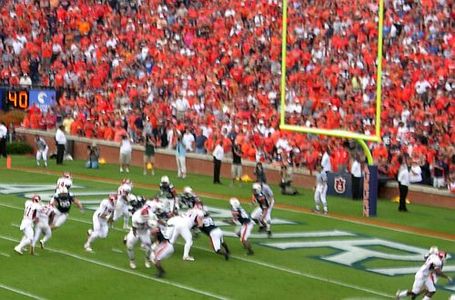 On their last visit to Jordan Hare, the Razorbacks had little trouble using short passing and running to roll up 416 yards. Auburn lost that one, 25-22. (Non-copyright infringing photo from Acid's own little camera!)

War Eagle, everybody. We've got a huge game coming up this weekend with the Arkansas Razorbacks. Divisional fortunes ride on this one. The Tigers must win to keep pace with West leader LSU. A loss wouldn't eliminate the Tigers, but we'd have to have some help down the stretch. Arkansas' situation is more urgent. A second loss in the division (to front-running teams) would all but eliminate them from contention. The game is going to be a 2:30 CBS national television headliner. Weather conditions should be near perfect, with sunny skies and temps in the 70s.

This matchup is being touted as the clash between the league's top rated quarterbacks. Auburn's Cameron Newton leads the SEC in pass efficiency, and Ryan Mallett is 3rd. Mallett leads the league in total offense with 344.8 yards per game, and Newton is second with 301.7. Neither quarterback is prone to turning the ball over. Newton has 5 interceptions in 6 games, Mallett has 6 interceptions in 5 games. Mallett has one lost fumble against ULM on a sack, Newton has none despite carrying the ball more than any Auburn back. As a team, Arkansas has given up nine sacks in five games, and Auburn has given up seven in six games. In summary, both quarterbacks put up a bunch of yards, don't make many mistakes, and seldom turn the ball over. How have these offenses been stopped thus far?

Video-game passing and offensive statistics are great, but sometimes the scoreboard tells a different tale. Arkansas was held to 17 by Alabama, 24 by Texas A&M, and 31 by Louisiana Monroe. Auburn only managed 17 against Mississippi State, and was nearly shut out in the first half against Clemson. The Tigers managed just two field goals in the second half against Kentucky. The reasons for these lulls are mistakes; a couple of errant throws here, a penalty or turnover there.

For Auburn, the errors have come partially through conservative play-calling: run-run-pass-punt with a lead. Another factor has been running backs fumbling the ball. We've had 4 different backs fumble the ball in one game. I think both Auburn and Arkansas would like to involve the running backs more. Auburn leads the league in rushing offense at 276 yards per game, but 112 of that is quarterback Cameron Newton. Arkansas is dead last in rushing, averaging 108.8 yards per game. Arkansas has suffered a lot of the penalty bug. I skimmed the game play-by-plays from the Razorback stat page, and one thing that stood out was how many false starts Arkansas has been called for. We've been on Lee Ziemba's case here at Auburn, but he's only got one legitimate one this year. By my count, Arkansas has been flagged 21 times for false start, in 5 games. Sometimes this has happened twice in the same drive. Arkansas is last in the league in penalties, getting hit for 67.6 yards per game. Add together low rushing numbers and false starts, and you have the answer for Arkansas' 9th place finish in red zone offense. It's also the reason Arkansas is averaging 30 points per game, while Auburn is averaging 36.

The above factors should point to Auburn outscoring Arkansas, but as always, there are two sides to the coin. Under coordinator Wily Robinson, the Razorbacks have steadily improved on defense. I continue to read columnists who decry a porous, no-name Razorback defense. Problem is that it's not true. Arkansas is 3rd in the league in total defense, behind only LSU and Alabama. The Razorbacks are aggressive, and will flood the box and the short outside zones with flying players. Auburn will have to have the downfield passing game working, and must also hit a few traps and draws to lessen the pressure. Arkansas can be run on, (9th in the league, 134.6 yards per game), but you've got to out-scheme and outnumber them to do it. We've been calling for more bubble-screens all year, but this is not the week to try them. Arkansas eats those things up for five yard losses regularly. It's the reason the Razorbacks are 3rd in the league in pass efficiency defense.

I think few of us Tigers are sleeping well this week, dreaming of the matchup of the Arkansas offense vs. the Auburn defense. Auburn sports the number two rushing defense in the league, but is tenth in pass defense, and we're playing the SEC's most prolific passer. A lot of us were scratching our heads as to why Ted Roof didn't tighten up and play some press-man against Kentucky. We'll have to wait another week, at least, for that. Teams that have gone man against Arkansas have given up big plays. Arkansas has the players to max-protect block, and the receivers to get by a defender. I'm afraid you'll see a lot of Auburn sitting back in soft cushion zone, and trying to come up and make the tackle. We'll surrender 10 yard chunks of yardage, hoping for an errant throw or two, or a penalty. That's the way it has to be in this matchup. We don't need to get in a big-play track meet with these guys.

Lastly, I'd like to address the idea that Bobby Petrino/Ryan Mallett don't like short passes. That's patently absurd. What Petrino has done since I've been watching him is play to his own players' strengths, and to the opponent's weaknesses. I assure you, he'll call a bunch of screens and hitches this week, so get ready. Many folks know Petrino for his vertical passing games at Louisville and Arkansas, but I remember a different Petrino offense in his one year at Auburn. We had muddled around with a one-back quick passing/power run attack for the first three years of Tommy Tuberville's tenure, and managed about 21 points per game. When Petrino came in, he installed a basic pro-I offense that forced defenses to defend the toss sweep and the 5 yard hitch. The result was the best offense in years, rising to almost 30 points per game. Tuberville elevated Hugh Nall to keep running the same plays the next year. The problem was that teams changed how they were playing us. Bobby Petrino never locks himself into one single philosophy. He's always going to take what the defense gives. We'll get the short passes this week, and he'll try to get his running game going. When Auburn compensates, he'll take shots downfield.

This will be a high scoring game almost certainly. It's going to come down to mistakes. Both teams make plenty. This game will be won by the team that makes fewer mistakes. Auburn is plus one in turnover margin, and Arkansas is minus two. With Cam Newton running our offense, I like our chances, but I'll not rest easy till this thing's over!

Be sure to visit TrackEmTigers.com this Saturday. We'll have the usual open thread up, and the play by play. Come join in the fun! War Eagle!