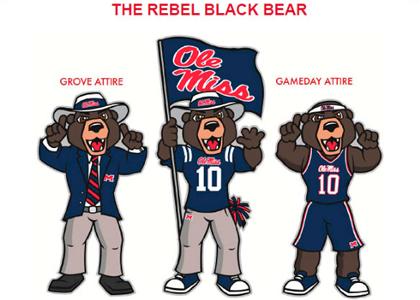 Is today finally the day Ole Miss fans throw in the towel? I mean seriously, a bear as its new mascot? Haven't Rebel, I mean Bear fans, endured enough? How long can you look at old grainy video of Archie Manning and reminisce about the good ole days?

In case you missed it, Ole Miss students overwhelmingly approved today a bear as its new mascot, replacing Colonel Reb, who's stood by for 100 years as the football team has been beaten from coast-to-coast. In a desperate attempt to make sense of it all, Ole Miss officials did what they always do; bring William Faulkner into the discussion. Supposedly Faulkner had some kind of relationship with a bear. Don't ask, it's Mississippi.

Not all fans approve. Speaking to Sports Illustrated.com, Brittany Garth, a student from Dallas, said she wished the school didn't have a mascot. "I just think it's kind of dumb. Why is our mascot a bear when we're the Rebels? It doesn't make a lot of sense to me. That's why I didn't vote. None of the three choices made any sense," Garth said.

Make that girl president of the student body... and fast. The Ole Miss Bears welcome Auburn to Vaught-Hemingway Stadium on October 30th. Officials ask that all fans refrain from making BJ and the Bear jokes.